"Did the Electric Car Deserve to Die?" Students at City Academy Charter School watched the film, did the research, and present their findings here.
by Amanda Krebs & Gianna Albaum

Last summer the environmental movement hit Hollywood, prompting City Academy's Advanced Placement Environmental Science class to see the movie "Who Killed the Electric Car?" It told the story of General Motors' electric vehicle, the EV1, which was presented as solving all our transportation problems: zero emissions, quiet, convenient, and not dependent on limited oil supplies.

In reality, however, the issue is not that simple. Though the movie was well-presented, we felt the need to delve deeper into the science behind the story. Our Environmental Science class took on the task of comparing an electric and a gasoline vehicle to determine if the electric car deserved to die.

To pit the two car types against each other, we chose two very similar cars: GM's (now defunct) EV1 and the Mazda Miata (powered by gasoline), which have similar horsepower and sexy shapes. The EV1 had a limited range of about 100 miles per charge, so the data we gathered compared the emissions for every 100 miles of driving. We chose several important points of comparison beween the two cars, among them emission levels, cost, and fuel availability and efficiency.

To run an EV1 from the Rocky Mountain Power grid, a combination of 76% coal, 10.5% natural gas, 11.7% hydro, 1.4% wind, and 0.3% geothermal power, plus approximately 2,357 megawatts of contracted power would be used. Gasoline cars run solely on gasoline. Wind, hydro and geothermal power are renewable, non-polluting sources. Other than the initial infrastructure and energy required to get them to the place where power will be harvested, they create no emissions. Coal, natural gas and gasoline do pollute. The EV1 pollution levels reflect the emissions from the powerplants that feed the grid charging the EV1's batteries. We determined the amount of kWH needed to power the car for 100 miles and broke it down according to the percentages of electricity source listed above. Pollution levels for the gasoline car, the Mazda Miata, were likewise based on 100 miles.

Coal, natural gas and gasoline each emit several pollutants when they are burned. Comparing the levels of specific pollutants helped us to decide which car was more environmentally friendly.
– Amanda Krebs 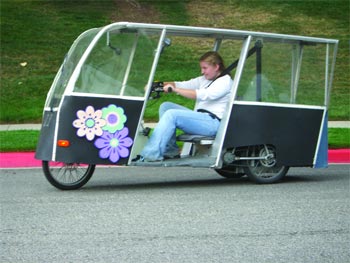 Amanda Krebs is a senior at City Academy. She is passionate about lacrosse and cares about social issues. Next year she will be attending Hampshire College in Amherst, Massachusetts.

With the rising cost of gasoline, the increased coverage of electric vehicle technology in the media and public awareness, and the release of "Who Killed the Electric Car?," it may seem that electric-powered cars can do no wrong. But before we jump into our electric cars and ride off into the sunset, we need to examine whether using coal to power our vehicles instead of gasoline is truly the answer or only a short-term solution.

The environmental impact of fossil fuels starts with the source: extraction, refineries and power plants cause a significant amount of damage in themselves. One way to extract coal is subsurface mining. This is the most traditional way, reminiscent of mining shafts, dark caves, ghost stories and tweeting canaries. Miner safety is a critical issue in the industry; the job has inherent dangers. Miners suffer exposure to harmful gases and particles on a regular basis. These poisonous fumes often lead to damaging physiological conditions such as black lung disease or even death. In addition, mines occasionally cave in, trapping people inside. Between 1991 and 1999, over 800 people died and almost 200,000 more were injured in mining accidents across the nation. Between 1990 and 2004, the industry was able to reduce the rate of injuries by more than half, and fatalities by more than two-thirds. However, 2006 saw the highest number of mining deaths in more than a decade. While some of these improvements are encouraging, subsurface mining remains a very dangerous industry.

Strip mining is another way to mine for coal that is less dangerous for the miners but more toxic for the environment. Instead of digging tunnels to get miners down to the coal, strip mining "strips" away everything that is between the miners and the coal. In this way, the miners are not trapped underground extracting the coal. However, this technique leaves the mined area devastated, with eroded soil, contaminated groundwater and a huge loss of biodiversity. Modern mining regulations in many areas require that an area be rehabilitated to its original state, but in some areas that is simply impossible. Past strip mining efforts have had, and some continue to have, disastrous effects on the environment around them. Though efforts at restoration continue to improve, strip mining is still a cataclysmic industry for the environment.

Oil extraction is a comparatively less pernicious industry. Drilling for oil in itself has a fairly minimal impact; the development of an oil field causes the bulk of the damage. Because wells don't always produce as much oil as expected, many sites must be disturbed during the exploratory drilling process. Road networks, housing, pipelines, ponds and waste piles must all be constructed to extract oil from a site. According to the college textbook "Environment," experimental models of the environmental impact of drilling predict that "vegetation can be killed when saltwater pumped in for flushing deposits is spilled or when plants are buried under gravel pits or roads. Air and water quality can be degraded by fumes from equipment and drilling operations, burning of natural gas associated with oil extraction, sludge ponds, waste pits, and oil spills." As a result of these effects, rehabilitation of an area can take decades.

Clearly, oil extraction and coal mining are both fairly deleterious industries, both to people and the environment. Switching our automobile industry to depend on coal extraction as opposed to oil extraction for power will not lessen the environmental impact. In fact, because there is more coal left in the world, it will only prolong our destruction of the Earth's resources.

The environmental effects of extracting the fossil fuels are clear, but the biggest concern comes from burning them. Coal is burned in the power plant, where it is converted into electricity to run electric cars, while oil is refined into gasoline, where it is burned in the actual car. Where the burning of the fuel occurs is important because it regulates where the air pollution occurs. Coal is classified as a 'point source' because the burning and pollution occurs at single, identifiable locations. Gasoline is a 'non-point source' because the burning and air pollution happens in millions of cars across the nation. Point sources are much easier to regulate. In cities, much of the air pollution comes from cars, so when air pollution is produced at a distant plant, city air stays much cleaner, creating less immediate damage to citizens.

However, air pollution and its contribution to global warming are debatably the biggest problems facing humankind today. Will powering our automobile industry with coal as opposed to oil help reverse these problems? It doesn't appear that it will. Though the electric car cuts down on most of these pollutants, there is still a significant amount of emissions. For example, cutting 75 pounds of carbon dioxide emissions by two-thirds may seem like a great deal, until you realize that every car would still be emitting 25 pounds of carbon dioxide for every 100 miles. While the EV1 made good progress on reducing emissions, it couldn't, in the end, make a large contribution to reversing global warming.

But don't scrap electric cars right away! The problem isn't the car; it's the coal that fires the plants that provide the electricity. Thanks to the advances of the 20th century, renewable forms of energy are becoming a viable option. Solar, hydro, geothermal and wind power are all becoming more and more efficient and available. If we put our efforts, energy, and (most importantly) funding into developing renewable energy technology and prepared to move our fuel economy over to a combination of different types of renewable energy, we could make the transition from oil to renewable energy smoothly and make a huge step toward reversing global warming. 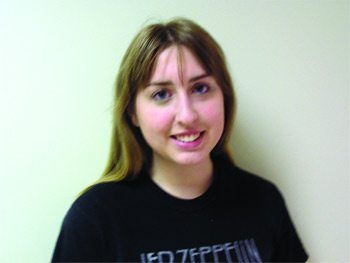 Gianna is a Junior at City Academy who takes lots of AP classes, is an accomplished thespian, volunteers with Utah GARDENS, and finds time to play soccer too.