Utah Bioregional Reader #4: Where Does Our Garbage Go? 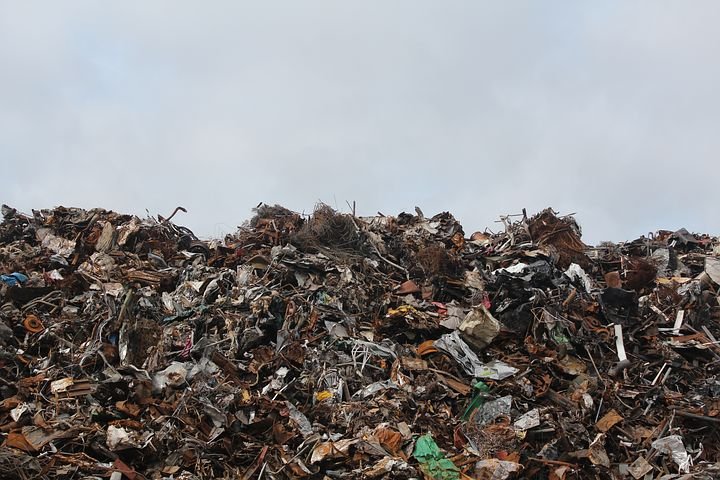 –Kevin Jones (“We’ll Keep it for You” bluegrass song lyrics)

For most urban residents, taking out the garbage is a mundane weekly chore – put it in the curbside bins and it vanishes. But of course, it’s not really that simple. As environmentalists like to point out, we can’t really throw anything away because there is no “away.” If a typical household neglects to take out the trash for even a week, the bins overflow with packaging, food waste and single-use plastic.

On average, every Utah citizen generates about four pounds of garbage per day, adding up to more than 2.8 million tons every year (says the Utah Division of Environmental Quality/DEQ which regulates municipal waste). Add to that an estimated 1.3 million tons of construction/demolition waste plus 1.6 million tons of industrial waste and that’s a lot of stuff to dispose of. Dealing with all that garbage is an essential function of government, because who else would do it? Utah DEQ oversees a complicated world of policy and regulation to issue waste disposal permits, control trash and pollution, and deal with hazardous substances.

Exactly where your own household garbage ends up depends on where you live. There’s a handy list of Permitted Solid Waste Landfills on the DEQ website that shows where Utah’s landfills are located, how big they are, and how many more years before they are full to capacity. If you live on the Wasatch Front, your garbage probably ends up at one of three big landfills: Salt Lake Valley Solid Waste Management Facility (445 acres; 25 years remaining), Trans-Jordan Landfill (160 acres; 18 years remaining), or Wasatch Integrated Landfill (225 acres; 22 years remaining).

The obvious problem is that landfills will run out of room as Utah’s population keeps on growing. Land is getting more expensive and there are fewer acceptable sites. New landfills are popping up in inappropriate places, like the Promontory Point Landfill in Box Elder County, dangerously close to the shore of Great Salt Lake. In order to mitigate the impending landfill problem, Salt Lake City has set a goal of Zero Waste by 2040 which means all waste would be recycled, reused or composted. That timeframe dovetails neatly with landfill expiration dates. By then we are all going to need to learn how to sort our garbage more efficiently!

To really understand garbage you also need to ask, where does it come from? Garbage is global — something that we unconsciously import from other places into our own bioregion. William Rathje, a professor of anthropology at the University of Arizona, pioneered a science of “garbology” in 1973, taking an archeological approach to the study of modern trash. Since then, more and more researchers have explored a geography of waste, analyzing the social and cultural meaning of what we throw away and where it goes.

Until recently, Utah didn’t even have the capacity to recycle our own plastic waste. Much of it was exported to China in giant shipping containers until the 2018 announcement of a new policy called “National Sword,” declaring that China would no longer be the world’s garbage dump. In the months afterward, the Deseret News reported that more than twice as much material from blue recycle bins ended up in landfills. However, National Sword also created incentives to deal with our own garbage problem. In 2020, a new state-of-the-art Materials Recovery Facility opened in Salt Lake City that can sort 35 tons of recyclable materials per hour.

The constant churn of consumer electronics provides another sobering look at globalized garbage. The short life-cycle of consumer electronics may start with mining for conflict minerals that fund brutal civil wars and ends in a poorly regulated overseas recycling industry that exposes workers and the environment to hazardous materials. At any e-waste collection event, a steady stream of cars arrives so that volunteers can unpack heaps of formerly high-status electronic junk — obsolete television sets, out-of-date computers, and last year’s cell phones reduced to a toxic pile of lead, mercury, cadmium and plastic.

Negative associations with waste dumps are so powerful that they can become part of a place-based identity. Geographer Joe Weber describes the Western U.S. as three distinct entities — a privileged “booming” West of ski resorts and expensive real estate, a “protected” West of national parks and forests, and an economically struggling “bypassed” West of degraded land and economic failure.

With reference to Tooele County, J. Matthew Shumway and Richard A. Jackson describe a downward cycle of wasteland identity in the bypassed West: “Desperate to stem the tide of out-migration and to provide jobs and a tax base, places have been and are being “created” — that is, rules developed, participants selected, meanings attached — not only for hazardous or toxic wastes but also for other activities, such as prisons, large-scale corporate feedlots for cattle, mega hog, and dairy farms, and coal-fired power plants. More than merely acceptable to local populations, these activities are sought after and embraced. The economic difficulty and political weakness of these places enable negative place myths to be created, thus legitimizing the use of desperate and weak places as locations for the wastes from the rest of the country.”

Many of Utah’s fiercest political battles have been fought over proposals to import and store toxic and radioactive waste. In the 1970s, the U.S. Atomic Energy Commission (AEC) began a search for a long-term disposal site for spent nuclear fuel. One proposal was for Davis Canyon on the boundary of Canyonlands National Park. The 1986 site overview document makes for horrific reading about what might have happened in what is now Bears Ears National Monument (the 2016 Obama Administration boundaries, that is; not the 2017 Trump-era monument which was downsized specifically to promote uranium mining).

In the 1990s, another epic battle raged over a proposed radioactive waste dump in Skull Valley after a company called Private Fuel Storage, LLC signed an agreement with the Skull Valley Goshute Indian Tribe to build a private spent nuclear fuel repository on reservation land. The project was finally stopped in 2006 by Congressional designation of the Cedar Mountains Wilderness Area which blocked transportation routes to the site. A Blue Ribbon Commission on America’s Nuclear Future (2012) report notes incredulously that “Utah took this action despite its tradition of hostility toward past federal efforts to designate wilderness lands and national monuments within the state.” This comment alone says volumes about Utah’s toxic waste identity, which the authors presume should prioritize a waste dump over the protection of sacred places.

Most recently, Utah’s wasteland curse has resurfaced in a proposal to turn the White Mesa uranium mill site in San Juan County into a radioactive waste dump. Surely, it’s no coincidence that once again the proposed dump site affects American Indian lands.

This article was originally published on January 19, 2021.