Settle In, Soak In.
—by Charlotte Bell

Born to Anjana (a supernatural woman) and Kesari (king of the monkeys), Anjaneya had magical powers and royalty in his genetic inheritance. His godfather was Vayu, the wind god. Anjaneya was considered to be the reincarnation of Lord Shiva. His auspicious pedigree made him a bit of a star among mortals.

According to legend, Anjaneya once mistook the sun for a glowing piece of fruit. In an effort to grab it for himself, Anjaneya leapt repeatedly, much to the annoyance of Indra, the sun god. After all, even the Koch brothers can’t own the sun. A battle ensued, causing Vayu, the wind god, to leave in a huff, jeopardizing life on Earth. Indra, donning his mediator hat, brokered a deal that gained Anjaneya his immortality and got Vayu back to work.

Anjaneyasana (Lunge Pose) expresses its namesake’s incessant leaps toward the sun. This month’s pose is a non-traditional variation of that pose: Parvrtta Anjaneyasana (Revolved Lunge). I learned this pose from my most influential asana teacher, Donna Farhi, who developed it years ago. She called it “Chaise Lounge Pose.” 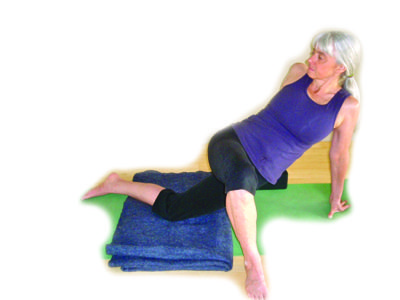 This may be a bit of a stretch, but I like to think of it as Anjaneya’s more mature, but nonetheless indulgent self, the one that settles into a chaise lounge and contemplates the sun. Instead of craving it for himself, he simply soaks in its goodness. I don’t know that gods have much use for Vitamin D, but Anjaneya, like his mortal cohorts—you and I—might gain energy from settling back and soaking it in, in moderate amounts, of course.

Chaise Lounge is a lunge with a twist. Its benefits are many: It lengthens the muscles and fascia of the outer bottom leg; expands the heart and chest; and rotates the thoracic spine, an area that loves to twist but that we too often ignore, much to our detriment. As we age, the thoracic spine often become less mobile, causing shoulder and neck tension. Revolved Lunge is a strong twist that mobilizes the thoracic spine. Plus, it feels good; it’s a perennial crowd pleaser in my classes.

To practice, gather your props: a nonskid mat and a yoga block. Begin in Mountain Pose, standing with your feet about hips width apart. Bend forward from the hip joints into Uttanasana (standing forward bend). Bend both knees and take a few deep breaths, inhaling into your back. Step your right leg back, straightening it at the knee so that you are in a high lunge with your left foot aligned between your hands on the floor.

Untwist your body, returning to a lunge pose with your hands on the floor, on either side of your left foot. Step your right foot forward into Uttanasana. Take a few breaths here, checking in with what happened in Revolved Lunge. How has your forward bend changed? Do the two sides of your body feel different? Then step your left leg back and repeat on the other side.

There are two ways to practice Revolved Lunge. The first is what I described above, pressing hands into the floor to lift and turn the ribcage upward. This focuses on the spinal rotation. Another option is to let the torso hang so that it hovers just above the floor. This creates a strong lateral stretch in the torso.

If I only have time to practice a few poses, Chaise Lounge is one of them. It’s become a go-to for me because of the spinal rotation, and because it wakes up my shoulders and arms, and grounds and stretches my legs. Plus it never hurts to put in some chaise lounge time, no matter the season.

This article was originally published on July 1, 2014.