A lesson in not passing up random shows at Kilby Court.

They could end up being Glass Animals. Or, in any case, some other up-and-coming band a year before the rest of the U.S. has really caught onto them yet. If you’re not already under the snake-charmed spell of lead vocalist, Dave Bayley’s voice in my current favorite song of theirs, give it a listen so we can get on the same page:

Back in September of 2014, the indie band of four school friends from Oxford, Glass Animals, played at Kilby Court, one of the smallest, most ironic venues in Salt Lake. Yes, ironic; a repurposed garage with a capacity of 200 at the end of a spooky cul-de-sac in Salt Lake’s Granery District, with a tiny stage lit by Christmas lights and styled with frequent metal washboard siding. However it is also quite iconic. Kilby Court has been the incubator venue for countless local bands, as well as other bands who have blown through town and have since become huge: MGMT, Vampire Weekend, Grizzly Bear, Fall Out Boy, Avi Buffalo, Rilo Kiley, Beach House, St. Vincent, and oh, does the list goes on. I always get the heeby jeebies at Kilby, and the crowd is usually on the young side, but apparently I should start paying more attention to Kilby’s calendar – and being more thorough in researching the bands scheduled to play.

So Glass Animals was already sort of a big deal, just not as much in the U.S. yet. By the time they played at Kilby in 2014, Glass Animals had just released (June) their first full length LP, Zaba, named after children’s book The Zabajaba Jungle by William Steig, on Paul Epworth’s (Adele, Bloc Party, and Florence and the Machine) new label, Wolf Tone. Their song “Gooey” was #19 Billboard Alternative Songs 2014 and the single “Black Mambo” was #23 on the Billboard Alternative Songs 2013. Since 2014, it seemed like you couldn’t put a long DJ mix from Soundcloud on without hearing Glass Animal songs “Pools” or the remix of “Gooey” if you tried. They also played at Urban Lounge in May 2015. To catch you up if you aren’t already familiar:

Besides my lesson to self about not ignoring Kilby Court, apparently this is also a lesson in not passing over bands with absurd names and nerdy backgrounds. Before they were Glass Animals, Bayley earned a degree in neuroscience at King’s College in London. Before the four band members: Dave Bayley (vocals/guitar), Drew MacFarlane (guitar/keys), Edmund Irwin-Singer (bass/keys), and Joe Seaward (drums) settled on the name Glass Animals, they were Afro Pony, and before that they were, wait for it, Alligator Puffin Chicken Go Yeh Woo.

At any rate, Glass Animals will be back in town someday, although a new tour schedule has not yet been announced. Until then, go get lost on Glass Animal’s website jungle – you can literally paw around the jungle scene in the album art.

I really didn’t mean for this blog playlist to take on such a jungle theme: Last week (well, two weeks ago – last week was Christmas – what can you do) I mentioned getting lost in the jungle of music blog mumbo jumbo about Woolfy, and the song “City Lights” – this week I literally got lost in Glass Animals’ album art on the homepage of their website. It reveals some sleepy jungle folk, some great space boots, and some cute critters. I think the album art was done by artist, Micah Lidberg. And I think I like getting lost in the jungle with all of you. 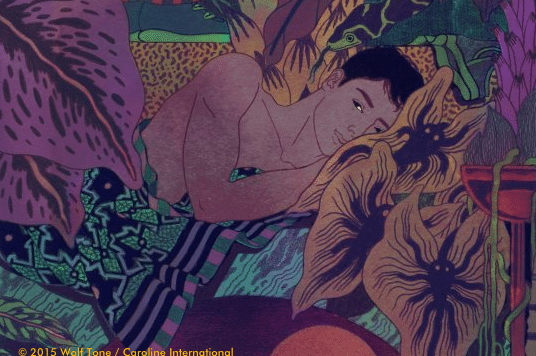 The music exploration jungle, that is. The music exploration jungle that is at the tip of our fingers on the internet, and apparently under the tip of our noses, live, in Salt Lake, before they were even a big deal. The kind of stuff we love to find and know all about, but it just takes a little more effort and sometimes someone to steer your curiosity. That’s where I’m here for you, to feed you some crumbs to a richer, more curious music intake.

Past Posts in this series: