What the Modesty Covers Reveal

It does us good to try to understand the extent of some people’s fear.
by Lisa Sorensen 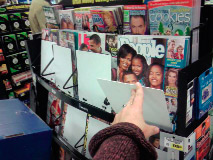 While those of us who worked to support and elect this nation’s first black president are thrilled by the Obama victory, it’s worthwhile to remember that not everyone is so ecstatic.

The week after the election I shopped at Smith’s on 33rd South. While waiting in the check-out line I noticed a plastic modesty cover obscuring the front of People magazine. I peeked, and saw a very modestly dressed Obama family.

I scanned the racks and saw magazine after magazine covered by white plastic. Skimpily-clad supermodels

on the front cover of Cosmopolitan? Compromising pictures of Paris Hilton? Nope. Mostly magazines featuring the Obama family. I felt like my parade had been rained on. I took a picture with my cameraphone.

When I snapped it, I thought, "Jeez, some jackass day manager is having a hard time with his bitterness level," but in fact, the modesty covers are always present in the racking system and could have been deployed by even a customer. In any case, they stayed that way for a week and were removed when the cover photos changed for the new issues.

I think the incident is a useful illustration of how some people really feel about this election. I’m disturbed by the Armageddon-style propaganda coming from some conservative quarters-and this is a handy example of exactly how that train of thought is playing out in some people’s minds. I’ll allow that whoever put up the modesty covers may simply have been an arch-Republican, but for me this action can’t entirely be separated from the context of race.

If you’re racist, you’re likely so conditioned by that lens that you won’t even see the flaws in your logic. People who hate Obama because of his race often don’t think of it as "hating Obama because of his race." They think in terms of secondary characteristics, like "he’s inexper_ienced (hyperbolize to he’s a charismatic con artist), therefore we’re doomed" or "he’s liberal (hyperbolize to he’s a communist), therefore we’re doomed." The people who are hyperventilating are extremely genuine in their belief and invested in their fear, and some of these people are my family.

As someone who’s not a US citizen, I have no formal political influence in this country. I am, however, pretty familiar with the politics of race. My country (the Bahamas) got majority rule (read: their first black government) in 1967, and on the eve of that election my grandfather was to be found out in the garden shed making molotov cocktails to fend off the rioting masses he was sure would come to kill his family. No riots occurred, though my country took another 30 years to mature past the practice of habitual race-baiting (from both black and white) during every election.

A picture of Obama published in The Economist fist-bumping a small blond boy split my emotions as I realized that, while it evoked a surge of hope within me for the healing of the racial breach in this country, my own mother would react quite differently. Since the election she is anxious and depressed.

My generation of Bahamians aren’t as invested in that particular kind of fear, and I see parallels to that evolution in this generation of Americans. It does us good to try to understand the extent of the fear, though. My mother is not a bad woman, and my grandfather was not an evil man. On election eve 1967 he was trying to protect his family the best way he knew how. It was lucky for everyone involved that the Bahamas avoided mass violence long enough for my generation to grow up and discard the old bullshit ways of thinking (and to have the privilege of ruining Christmas dinner for the old guard because of it).

Peace grows from peace, not from war. That goes for pretty much every flavor of conflict.