It’s not every day you get to walk into a brain. In April you’ll have that opportunity. Waves of Mu is a multi-media, multi-discipline installation/performance that leads audience members through a sensory and experiental exploration of the human brain, with an emphasis on mirror neurons, a friendly and only recently understood brain phenomena. The show is the-ahem-brainchild of performance hotshot Amy Caron. 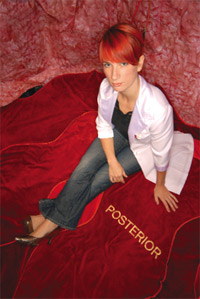 Caron and Waves of Mu have spent the past year touring: Vermont, Alaska, then over to New York for a month-long residency in the East Village where the show received high praise from both the art and science worlds. Art critic team Andrew Andrew loved the show, and relished trying to describe its eclectic nature: “You go through an installation first, of the brain, and there were all these people in the brain-it was so Michel Gondry-and the people were like, ‘Hello! I’m the Central Cortex, and this is Madame Thalamus…’ It’s something that you can only get in New York.”

But let’s back up a sec: Not only do we get this show in Utah, turns out its creator is a local girl. And if any of this sounds familiar: walls papered in photos of brain tissue, red velvet flooring, crystal chandeliers-that’s because Caron displayed pieces of the show and tested it out on Salt Lakers as she was in the process of creating the work. We’ve seen pieces of the show in various iterations, most notably at the Salt Lake Art Center last summer for the Present Tense Group Show. This April show brings in not just the installation, but video, theater, and a kind of lab experiment/lecture/performance.

Caron originally moved to Utah as an aerial ski jumper for the US Freestyle Ski Team, and after eight years of that, got a BFA in Dance at the University of Utah. An advocate for what she calls the “empowered amateur,” she likes to learn as she goes, in fact; she says that learning is one of her biggest motivators in creating art. Caron has worked in film and animation, has studied dance all over the world, and her resume is a trophy case of residencies and grants. Everything about her says risk.

For example, she collaborated with scientists as she was creating Waves of Mu, including neuroscientist rock star V.S. Ramachandra, who authored the paper in which Caron first heard about mirror neurons. When asked how she managed to meet Ramachandra to collaborate, she says, “Oh, the front door, the back door, the side door.” Whatever it took. And, she admits, “I had already said in a proposal that I was working with him, so I was pretty motivated to make it happen.”

When asked what was her biggest risk in creating Waves of Mu, her hard drive crashes for a second under the pile of risks this project took. “I think,” she says after a quick re-boot, “the biggest risk was that I didn’t know what I was doing when I started.” She didn’t know how to create a large-scale installation, let alone get it from Alaska to New York. She started out knowing almost nothing about neuroscience. And she said one of her biggest challenges was standing up for her vision. When she realized she didn’t have the resources to match her vision, she made the decision not to compromise. Instead of lowering her standards, she went after the resources. 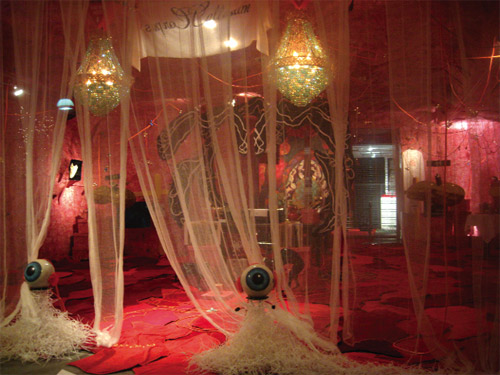 Brain science isn’t a discipline most people find easily accessible. In the process of creating this piece Caron has become highly knowledgeable on the subject. “People want this,” she says of the neuroscience. “This is what explains the essence of us.” Caron’s work opens up the research in a new and exciting way.

“You don’t know what you’re in for,” writes (her new friend) the neurologist V.S. Ramachandra about Caron’s work. “It’s a surprise that tells you something about yourself that you already know, but are not aware of. You experience what being human is all about.”

Some risks pay off richly.

And, just so you know: Mu is pronounced “myew” (like a kitty) and “Waves of Mu” is a brain science term that describes mirror neuron activity….