I first encountered Burners a decade ago. Those pilgrims to the Nevada desert’s annual, week-long, Burning Man event and associated regional “burns” like Utah’s Element 11 helped accelerate my emergence from a half-century of conservatism.

Initially, I considered them a bit too hedonistic, and their festivals that culminated in the torching of large, temporary sculptures seemed resource wasteful and “carbon un­friendly.” But as I met more Burners, I couldn’t ignore that most were perceptive, broad and deep thinkers who cared intensely about each other and their world. And they were quirky and interesting as hell.

But I avoided attending their events until last month when I fin­ally popped my Burner cherry in the company of 1,200 others camping on the alkali flats west of Grants­ville. We slept in tents, trailers and motor homes immersed in the pulsing beat of near-constant techno house music.

And it happened. I connected. I plugged into the vibe. I got it. The uninhibited dancing, the discussions with no forbidden topic, the gifts freely offered without expectation of return, the camaraderie all chipped away at boundaries letting us see ourselves both as individuals and as part of a whole. I even learned to let the incessant music, which one friend referred to as the burn’s “heartbeat,” wash over me during rare moments of sleep.

But then it happened. 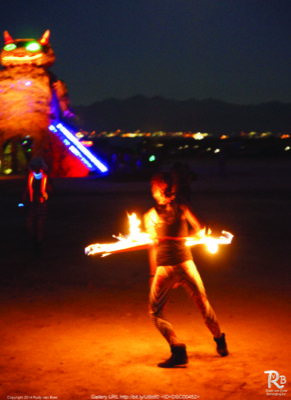 During the burning of the centerpiece sculpture…a 3-story tall scrap-wood and dried tree branch effigy of a monster from the Maurice Sendak children’s book, Where the Wild Things Are, I sat along the safety perimeter about 200 feet away. The flames got so intense we all reflexively moved back. I then saw, over the backs of volunteer rangers, wildly gesticulating limbs heading toward the blaze.

Then the word spread. Someone had hurled himself into the inferno. The brave souls who imperiled their own lives trying to stop him had been forced back by the heat.

My mind immediately speculated. Was it ____? Before the jumper’s name was released over a day later, others were asking themselves that same question. My own fill-in-the-blank person was someone I’d interacted with…or more correctly failed to interact with…that very afternoon. He’d come to a scheduled discussion, PBR in hand, and made a string of less-than-cogent questions and off-the-mark personal comments. Finally, the group organizers asked him to leave.

I could have absolved myself from all involvement, but I knew better. That inner voice had whispered after his first few comments to move closer and quietly say, “They’re trying to include everyone here”…radical inclusion is one of 10 Burner guiding principles…”so would you mind limiting your comments so the rest of us can participate, too?”

My apathy continued as he took the walk of shame. The voice told me to follow him and offer a conciliatory comment: “Hey, you’re obviously a caring guy. When you’re sober, come back and talk. Here’s my email if you want to connect.” Instead, I joked about him to the group. He may have even overheard it or the laughs it generated as he left the area. Did my callousness somehow contribute to his sense of alienation? Did he commit that fatal act?

That concern was alleviated when an identity was announced, but then there was a fresh set. Christo­pher Wallace had been a close friend of friends. He’d stayed at their camp…one I’d visited. We’d both worked at the same small business. We’re both writers and editors. We’re connected.

One of our most persistent cultural myths is that of the lone wolf: the rugged, self-made, I-did-it-my-way individual. The truth is something that Burners, New Agers, hippies, metaphysical types and many spiritual and religious folk have been saying for a long time. We humans are at our very core social creatures. We’re all connected. We’re “one” similarly to how the highly differentiated cells that form our bodies are united.

The vast majority of us simply don’t live solo. Our actions impact those around us, and theirs in turn influence those with whom they come in contact. Those interactions carry varying weight and their impacts range from a barely felt, perhaps unnoticed brush, to a gentle nudge, to a major boost or a shove, to a knock to the floor, or to a saving lift.

As much as we realize that we’re all ultimately responsible for our decisions, something inside knows that we oversell ourselves on that point. We try to diminish the feeling deep in our guts that we all constantly influence each other for good or less-than-good in minor to major ways.

Great speculation followed the incident. Was it depression, delusion, desperation, detachment, drink or drugs? And those are just a few Ds. However, the private revelations of several of Wallace’s close friends shed light on the fact that a very loving, much-beloved, well-adjusted, satisfyingly employed, happily married, 30-year-old had been experimenting with altered reality states using mescaline and, most likely, other hallucinogens. Contrary to some media reports, there were no suicidal signs, he hadn’t foretold of his act, and there was no note. At this point, however, the Grantsville police department is not offering further clarification of its previous reports.

Wallace’s funeral was a healing affair that confirmed what his friends had told me about him. Unlike other funerals I’d attended at which religious believers and non-believers spoke cautiously at odds with each other, this one had Mormon family and atheist friends making accepting, loving tributes that had positive effects on both.

Several of his friends who knew about his condition are, however, still feeling deep regret for having not stayed closer to him that night. Whatever he saw in that fire, they’ll never know although the autopsy results due out in a month may at least shed some light on what chemicals were involved.

Videos of this tragedy were shot, broadcast on TV news, and have legs on the Internet. I imagine that they’ll be used both in anti-drug and in harm reduction campaigns in the future. They may serve either purpose and be one way that Chris Wallace can connect to and influence individuals he’ll never meet.

What I know now more than I did before is that we’re all in this together. What we do and say impacts those around us who in turn affect an ever-broadening circle like ripples in a pond. That’s my takeaway as a now deflowered virgin Burner.

Jim Catano is a Salt Lake City-based writer and editor.