One night in 1974, a young man named Demetrios Agathangelides, a Greek immigrant who had studied agriculture in his home country, sat down at his kitchen table in his adopted home of Logan, Utah and pulled out a package of seeds. A plant geneticist at Utah State University, Agathangelides had been testing and researching high altitude, short-growing season varietals. He knew almost better than anyone what vegetables would grow well in that mountain town’s gardens.

Into little manila envelopes he scooped seeds, folding and labeling the little packets, readying them for sale to his neighbors and friends. 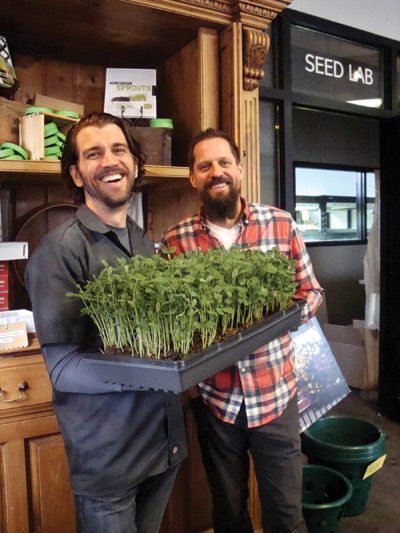 The same decade that Demetrios Agathangelides started the business that would later be known as Mountain Valley Seeds, all around the country about 10,000 other small independently owned seed companies were supplying growers with locally adapted plants. But by 1985 the number of small seed companies had dropped to around 7,500. By 1998 there were as few as 1,500. Today only a few hundred independent seed companies remain, largely because of buyouts and competition from chemical companies that are taking over the seed business.

It’s a nice bit of fortune, then, that of the few hundred remaining independent seed companies, Mountain Valley Seed Company is still alive and well here in Salt Lake City. Under new ownership since 2010, the seed company is stronger than ever and helping to ensure a future for home gardeners and small-scale farmers filled with a diversity of plants and vegetables well-adapted for Utah’s unique and challenging growing environment.

I met up with Mountain Valley Seed owners Robb Baumann and Lance Heaton at their warehouse and shop on 1700 South, just west of 300 West. A few feet away from where 2014’s seeds were being shipped in, packaged and shelved, Baumann and Heaton showed me into an office, offering me a seat at a large golden-colored slat wooden table.

I wasn’t surprised to learn they had made the table themselves, repurposed from old locker room benches, or that they were both avid skiers. I was surprised to learn that these young, outdoorsy-looking men had met over a decade before while undergraduate economics majors at the University of Utah.

The friends’ paths had parted after college. Baumann settled in Florida, consulting for a multimillion-dollar aerospace company. Heaton remained in Utah where he started buying up small businesses and selling them for a profit before moving on to the next venture.

Through it all, the two remained friends, meeting annually to ski the Utah powder. Riding the lifts, they dreamed of owning a business together until, one day, Baumann decided to take the first step. He went home, put in his notice, and 18 months later moved with his wife and kids back to Salt Lake City.

The two friends started looking for a business, something they could buy, hold for a time and eventually, they thought, sell. The search lasted two years, until one day an acquaintance introduced them to Demetrios Agathangelides. At the time, Mountain Valley Seeds was a successful, though small, business and it was not for sale. But the Greek geneticist was getting older and Baumann and Heaton, intrigued by the company, made an offer.

“We didn’t have any growing experience other than our small gardens at home,” says Heaton.

“But we fell in love with Demetrios,” adds Baumann. “He was so full of life and his love for the work he did was very contagious.”

Though Agathangelides remained skeptical of transitioning his company into new hands, Baumann and Heaton were persistent. They started working for the company, learning the ropes as they went, until Agathangelides agreed to sell. By May 2010, when Mountain Valley Seeds transferred hands, Baumann and Heaton were committed, not just as owners, but managers and workers involved in every part of the business.

Walking down a single row reveals to our left, bulging bags of peas, buckwheat and winter rye. To our right are tidy rows of boxes holding hundreds, thousands, of small seed packs with wildflowers, vegetable and herb seeds. Beyond the shelves comes the thrumming sound of an engine. We move toward the low rumble. Climbing onto a platform, I find a row of 1950s-era green metal tumbler machines with a metal funnel on one end. Standing over one of the whirring instruments, a young man, his long blond hair tied back from his face, watches as purple garden peas fall into envelopes and are pushed out the other side, sealed and ready for shelving.

On our way back to the office, we navigate past pallets heavy with bags of incoming seeds from Mountain Valley’s growers, small-scale farmers who devote their fields to seed crops instead of food crops. It’s the kind of growing that needs a lot of space—to avoid unintentional cross pollination; and a lot of growing time—seed plants need to mature past their harvest time; some crops like carrots and onions need two years of growth before they produce seeds.

“Our corn, peas and beans grow really well in Idaho, root crops and vine crops in central California,” says Baumann. “We have growers in Oregon, a lot of different places. We would love to grow in Utah, but it’s not practical.”

Even with the distance, Baumann and Heaton maintain a close and personal relationship with their growers. The business partners visit the seed growers every summer to inspect crops, ensure they have the right look and taste, and to hear about the latest interesting heirloom or hybrid varietal that their growers might want to try. Bau­mann and Heaton agree, these trips are the best part of the job.

This is the sort of hands-on work that Baumann and Heaton never expected to do, though now they can’t imagine running their business any other way. One benefit of this close relationship is knowing that their growers are following Moun­tain Valley’s rule against using genetically modified (GM) seeds.

Mountain Valley is one on a short list of mostly local independent seed companies that has signed the Council for Responsible Genetics Safe Seed Pledge. With this commitment they promise to not knowingly buy, sell or trade genetically engineered seeds.

Unlike open pollinated heirloom or hybrid seeds, GM seeds are made in labs where genetics from foreign organisms, say a bacteria or an insect, are spliced into the seed’s genetics to give the plant certain desired traits, perhaps a resistance to some pest or disease.

While the selling of seeds has become an industry dominated by names like Monsanto, Dupont, Dow and Bayer (see “David and Goliath,” this page), Baumann and Heaton aren’t too worried about the survival of their operation. While Baumann admits that the mergers can be a little unnerving, he’s pretty sure that Mountain Valley Seeds’ niche—heirloom, hybrid and certified organic seeds that work well in high altitudes and short growing seasons—is pretty secure.

“People who buy from us see the value in an independent source. A lot of our customers are small farmers, CSA growers working maybe 50 acres, who are really in the same boat as us, going against big guys. We bond on that front. We support them, they support us.”

The differences among open pollinated, heirloom and hybrid seeds are subtle but significant and, as Baumann says, “People often don’t understand or are misinformed about the differences.” So here’s a quick list of definitions:

• Heirloom: These plants are pure, unchanged varietals that have been passed down for generations. They often have higher nutritional value and are often specially adapted for the climate and conditions in which they were created, but they may not have the highest yields. Seeds saved from these plants, that have not cross pollinated with other varieties, will produce offspring that are identical to the parent plant, save for incidental, natural mutations.

• Hybrid: These plants are intentionally cross-pollinated in a controlled method by people in order to create a plant with desired traits. There is no laboratory manipulation of genes like in genetically engineered seeds. These plants often have more consistent and greater yields. Their seeds are viable, but their offspring are unlikely to be identical to the parent.

• Open-pollinated: This is any seed that is pollinated via a natural method such as wind, insects or water. Hybrids are not open pollinated.

This article was originally published on March 1, 2014.