FEBRUARY 1 The Sun rises today at 7:38 a.m. and sets at 5:46 p.m. The average maximum temperature this month is 43 degrees, the average minimum 24 degrees. Average monthly snowfall is
9.3 inches.

FEBRUARY 2 Today is Winter Cross-Quarter Day, the midpoint between the Winter Solstice and Spring Equinox.

FEBRUARY 3 In medieval Europe, manuscripts were written on parchment and vellum, thin sheets of dried animal skin. Parchment and vellum were hard to come by, so many writers scraped off earlier writings and used the hides over again. These recycled manuscripts are called palimpsests, from the Greek palimpsestos, meaning “scraped [clean and used] again”—not a word we have a lot of use for in today’s culture.

FEBRUARY 4 As heated blood travels down the leg arteries from a bird’s core, cold blood running back up from the feet in adjacent veins sucks most of the heat out and returns it to the core. When it’s chilly outside, a bird’s feet may be barely above freezing, while its core remains close to 110 degrees.

FEBRUARY 5 LAST QUARTER MOON. Weirdly enough, cashews are in the poison ivy, poison oak and poison sumac family. The nut is surrounded by a double shell containing a highly allergenic resin and has to be steamed open and carefully extracted. Which is why you never see cashews in the shell.

FEBRUARY 6 Got the winter blahs? Go for a walk, whatever the weather, and tune into the natural world.

FEBRUARY 7 Planned your garden yet? This year, why not grow grain? Both quinoa and amaranth are lovely and tasty, and they grow well here. And if you don’t want to eat it, the birds will. You can also grow millet for your pet bird or its wild cousins. 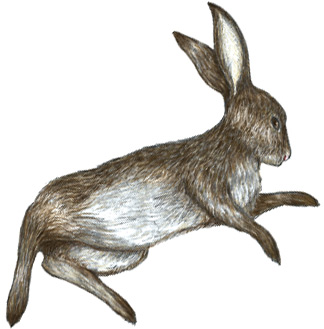 FEBRUARY 8 If your lawn or garden didn’t grow well last year, it would be a good idea to get your soil tested. Do it now and you’ll be able to add amendments before planting time. Get a soil test kit from the county extension office or online.

FEBRUARY 9 It’s estimated that for every pound of humans on the planet, there are 70 pounds of insects.

FEBRUARY 10 To keep houseplants moist while you’re out of town, water the plant well, then place a donut of dampened newspaper on top of the soil to hold the moisture in.

FEBRUARY 11 In Sweden, bunnies are being turned into biofuel. Wild and stray pet rabbits are overrunning Stockholm, and since they’re being shot anyway, the local government figured they’d put them to practical use.

FEBRUARY 13 NEW MOON. If the temperature is above freezing, you could prune grape vines, honeysuckle, clematis, holly bushes and fruit trees now. (Keep in mind that fruit grows on horizontal branches, not vertical ones.) Don’t prune spring-flowering shrubs though, or you won’t get blossoms this year.

FEBRUARY 14 The natural world is full of what scientists call “sneaker males,” biologically inferior males who dash in and mate when the alpha male’s back is turned, or even impersonate females, ala “Some Like It Hot,” to sneak in under the radar. Look for a smiling crescent Moon the next
three nights.

FEBRUARY 15 It’s mating season for the coyotes, foxes and raccoons around the valley.

FEBRUARY 16 Current homo sapiens have three vestigial muscles located under the scalp that were once used to swivel our ears to better localize sounds. Some people can still use them to wiggle their ears.

FEBRUARY 17 Repeated skin contact with philodendron leaves may cause an allergic reaction. Con­sum­ing them will cause abdominal pain.

FEBRUARY 18 Male jumping spiders have to provide lots of visual signals to avoid becoming lunch. Unlike the rather drab—and apparently far-sighted—females, they have swollen, psychedelic pedipalps, a funky goatee and crazy long multicolored front legs. They approach females doing an arachnid version of the jerk, with front legs raised and pedipalps waving.

FEBRUARY 19 Viruses get viruses. A French researcher recently announced the discovery of a tiny virus infecting a larger one. This suggests that viruses may evolve in reaction to one another.

FEBRUARY 20 It’s time to start seeds for cool-weather vegetables, including broccoli, Brussels sprouts, cabbage, cauliflower, leeks, lettuce, mizuna, onions and spinach. Use grow lights or place in a sunny, south-facing window. Be sure to keep turning them once they sprout.

FEBRUARY 21 FIRST QUARTER MOON. Cats purr at the same frequency as an idling diesel engine, around 26 purrs per second.

FEBRUARY 22 Pull mulch back from emerging bulbs, but don’t remove it. If the ground is bare, you could also tackle some of those hard-core perennial weeds, like mallow, plantain and crabgrass. (Just make sure you know what you’re weeding.) 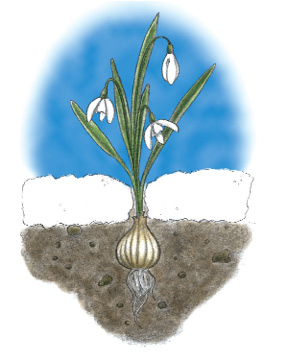 FEBRUARY 24 Houseflies are starting to hatch. Galileo, who turned his telescope around to examine a fly, was the first to describe the compound eye of an insect.

FEBRUARY 25 Look for Mars near the almost-full Moon tonight.

FEBRUARY 27 If you didn’t do it last fall, cut back ornamental grasses and thin climbing roses and raspberries. 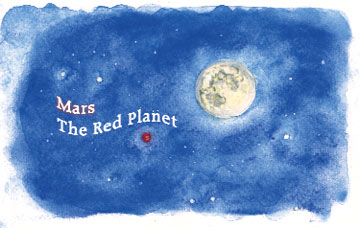 FEBRUARY 28 FULL SNOW MOON. Put a barrel or box over rhubarb plants now and you’ll get an earlier crop. Rhubarb leaves contain high levels of oxalic acid, which causes weakness, breathing difficulty and gastrointestinal problems, so eat only the stem.

Every gardener knows that under the cloak of winter lies a miracle…
a seed waiting to sprout, a bulb opening to the light, a bud straining to unfurl.
And the anticipation nurtures our dream.
—Barbara Winkler

Adele Flail is a technologist at ARUP, but likes art better. She makes arty things: contact her here.

This article was originally published on January 28, 2010.