By some counts, Utah air quality hit a new low in 2013, with months of inversion-trapped air fouling our lungs, major expansions in the works for Holly Refinery and Kennecott’s Bingham Mine, and a legislature that convened with only a single clean air proposal in its docket. But despite the apparent gloom, things are actually humming away in an auspicious manner.

Legisla­tors received hundreds of calls for action from their constituents last winter; thanks to everyone who called, the upcoming session will see clean air proposals from both parties, and in both Houses.

In October, Governor Herbert announced the creation of a Clean Air Action Team; the 38-member team includes stakeholders from across the spectrum, and will serve as a think tank for the rules-and-regulations-only Division of Air Quality. Herbert and other Utah officials also actively supported the federal government’s proposal for Tier 3 restrictions on motor vehicle emissions. Given that the dominant response in Utah is a knee-jerk denial of anything initiated by the feds, the fact that Herbert backed Tier 3 is huge.

In a bit of a Pyrrhic victory, the World Health Organization lent its gravitas to the quest for cleaner air when it concluded that exposure to outdoor air pollution causes lung cancer (WHO also noted an association with an increased risk of bladder cancer). This means air pollution is now categorized similarly to tobacco smoke, UV radiation and plutonium. And who can ignore WHO?

You’ll see air quality covered more frequently by Utah’s news media these days, too. Why? Because there are events, ideas, and regulations to cover! PM2.5 and ozone levels are now reported daily on several radio stations, and both the Salt Lake Tribune and the Deseret News post daily air quality and action alerts. In short, awareness of dirty air and its health effects has permeated the public consciousness in a way that it rarely, if ever, has before. Air quality is now part of the conversation.

Perhaps the most important air quality action in 2013 is the culmination of several years of work. Way back in December 2009, the Envi­ron­mental Protection Agency (EPA) found that Utah was exceeding levels for 24-hour PM2.5 that the EPA considers acceptable (see Novem­ber CATALYST for details). It gave Utah 10 years—until December 2019—to bring PM2.5 levels below the threshold. In September, the Division of Air Quality (DAQ) delivered a State Implementation Plan (SIP), designed to help Utah toe the line by the 2019 deadline. Public and expert comment periods end December 2; the finalized proposal will be submitted to the EPA for evaluation shortly.

More important, though, is the inescapable conclusion that the SIP is allowing Utah’s big industry to significantly increase its emissions while looking for cuts elsewhere.

In fact, the biggest reduction in emissions comes not from anything that Utah has done, but rather from federal Tier 2 gasoline and car standards that were phased in between 2004 and 2010, as well as low-sulfur diesel rules for on- and off-road vehicles. Because Tier 2 and low-sulfur diesel standards have now actually taken effect, they are the primary drivers for the huge reductions in Utah’s transportation emissions projected for the current decade.

The DAQ deserves credit for reducing emissions from buildings and businesses (“area sources,” in SIP parlance). Regulations passed this year significantly limit emissions from commercial bakeries, beauty salons, chain-driven char broilers, printing and publishing, painting and degreasing, and the use and sale of wood stoves and wood boilers among other sources.

But although those reductions are important, they are almost entirely canceled out by heavy industry (“point sources”), which will emit 12% more key pollutants in 2019, according to the SIP. That translates to 1,854 more tons of pollutants entering our airshed this decade.

We all need to understand—and acknowledge—that heavy industry contributes much less to the Wasatch Front’s air pollution than other sectors, particularly transportation, and that improved technology will further cut emissions from heavy industry in this decade. However, growth in the industrial sector is so large—think of the recently approved major expansion of Holly Refinery—that the net effect is an increase in pollutants. Heavy industry eats away at the pollution reductions the feds and the DAQ worked so hard to create.

Additionally, expansions such as Holly’s are accounted for in the SIP by projecting the additional emissions the refinery’s combustion process will produce. But what about the scores of trucks that will be needed to transport crude to the refinery? It is unclear if the SIP takes into account the considerable emissions that a fleet of trucks produces.

Furthermore, industry emissions controls that SIP does put in place for the current decade are not scheduled to be phased in until 2017-2019—right up against the SIP’s deadline. What are the chances that all mandated controls will be operating properly and on time?

There is no wiggle room in the SIP. Its projections attempt to bring Utah into attainment at 35 ug/m3 (micrograms per cubic meter)—the upper limit considered acceptable by the EPA. If the SIP’s projections are off by even 1%, the proposal will fail.

The EPA has 12 to 18 months to review the DAQ’s proposal, at which point they can accept it as-is or send it back for more cuts. Should the EPA not be satisfied, or should 2019 roll around and our airshed is still found wanting, the agency can swoop in and take over the process, finding its own ways to cut emissions. Or it can withhold federal funding for roads and other projects until we get our act together.

Kennecott: Up in the air?

Although the SIP assumes a large expansion by Kennecott, a couple of factors may stand in the company’s way. This fall, a 2011 lawsuit filed against Utah Kennecott Copper by several environmental groups was heard in US District Court. The suit claims the mining giant violated the federal Clean Air Act when it failed to get EPA approval for a projected near doubling of earthmoving operations at its Bingham Canyon Mine.

Kennecott argues that state approval, received in a two-step process in 1999 and 2011, was all that it needed. Both permit changes passed a review by state regulators, a public-input process, and a DAQ vote.

Plaintiffs, including WildEarth Guardians, Utah Physicians for a Healthy Environment, Utah Moms for Clean Air and the Sierra Club, admit they should have spoken up during the public comment periods. But they counter that since the DAQ approval, Wasatch Front pollution has increased to the point that further expansion is now untenable. US District Judge Robert Shelby took the case under advisement—stay tuned.

But perhaps nature has already taken care of what advocacy groups are trying to accomplish. In April, Kennecott was visited by a huge landslide, rendering nearly half of its Bingham Canyon operations inoperable for who knows how long. Is it just coincidence that, despite the Salt Lake Valley suffering through one of the hottest summers in recorded history, the Valley’s summer ozone level, which rises when high temps combine with pollutants, was one of its lowest ever? Or could the vast reduction in emissions effected by the partial shutdown have just a teeny bit to do with this? Keep your eye out for the studies that will surely be forthcoming on this topic.

Thanks to last winter’s citizen uprisings, Governor Herbert is anxious to appear concerned about Utah’s air quality. On October 15, he announced the creation of an independent, 38-member Clean Air Action Team (CAAT), whose purpose is to recommend remedies for the state’s air problems for implementation by government, businesses, and you and me.

The CAAT has no regulatory authority, however—it needs the DAQ to create rules around its recommendations, and a sympathetic legislature to fund them.

It is also unclear whether a 38-member task force can be cohesive enough to agree on ideas. But the membership looks promising. Co-chaired by Dr. Michelle Hofmann, a board member of Breathe Utah, and Lonnie Bullard, principal at Jacob­sen Construction, the team includes three mayors; five legislators (including Representative Edward Redd, R-Logan, a physician); a mix of state agency officials; and representatives from the health care community, industry, advocacy, research institutions, and local businesses.

Envision Utah, who is in charge of making sure everyone plays nicely, has announced the following goals:

• Solicit public feedback on the ideas for reducing air pollution and the implications of these choices; and

• Develop a set of broadly supported recommendations to improve air quality in the short- and longterm.

CAAT meetings, to commence in summer 2014, will be open to the public. Leave comments or suggestions and sign up for updates at http://envisionutah.org/ issues/air-quality.

After last year’s dismal legislative session, this year’s legislature, slated for January 27-March 13, is poised for action. Already in the pipeline are bills designed to promote electric vehicles; expand funding for public transit; strike the clause that says Utah’s environmental quality laws can’t be stronger than the EPAs; build a fund for exchanges/ buy-back programs for inefficient, small-motor devices such as leaf and snow blowers; and create a sustainability coordinator for state agencies—this person would assure that best practices and ideas are shared across agencies.

Many legislators have already expressed a desire to stand up for clean air. Follow these folks and make sure to thank them for the work they do on our behalf, whether or not you are in their district. (Not sure who your representative is? Find out at le.utah.gov/GIS/ findDistrict.jsp .) Keep your eye on Patrice Arent (D, district 36), Rebecca Chavez-Houck (D, district 24), Edward Redd (R, district 4), Jim Nielson (D, district 19), Becky Edwards (R, district 20), and Joel Briscoe (D, district 25), among others.

It’s great to see that clean air is now truly part of the conversation; you could even say we are flirting with the critical mass needed to make sustaining changes. It’s up to us to keep the conversation going. The silver lining of the 2013 inversion is that it hammered home bad air in no uncertain terms. The incontrovertible fact is that Salt Lake City is in a valley, a valley filled with industry and cars. The time to tackle clean air issues is all the time. 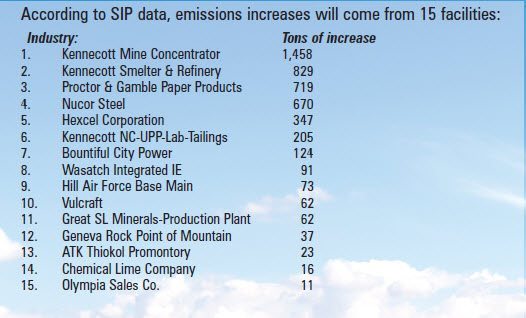