A different kind of father-daughter dance. 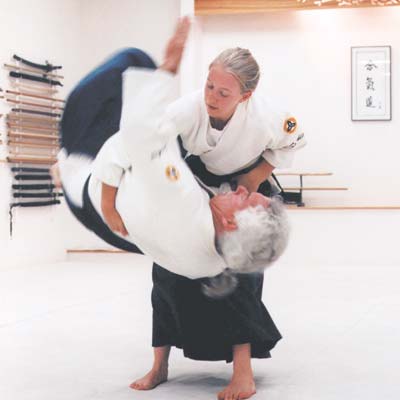 I do not remember the first time I actually threw my dad over my back. Or the first time he came at me with a wooden knife poised behind his leg. I do know that the ability to restrain his arm created a very different sort of relationship between us than most girls had with their dads. While my friends went to daddy-daughter dances, I was doing a different kind of two-step with my father. Sometimes he came at me with a loud "hi-ya!"; other times I pinned his hands behind his waist, my blond ponytail cutting through the air as he struggled in vain to break free. But always we took turns launching or rolling with the attacks coming at us, using bare hands, long leather-bound swords, and lots of flying, feet first, across the room.

"You haven’t got me there," my dad says ,stepping away from the throw I am just about to perform. I get up from my squat and let go of his arm. He’s not a small guy. Muscular and just over six feet, he moves quickly and lightly, but could still squash a 13-year-old girl if she weren’t careful. But I know that’s not the case with me and I’m eager to prove it. The sleeves on his cream-colored gi are damp, and his face is red from practicing in the heat of the coming summer. He reaches out to grab me again, strongly, powerfully: "Extend through your center, stabilize your feet. You need to do that before you can hold me up."

I exhale in frustration. Sometimes I think he gives me a harder time just because he’s my dad. But I try it again, moving into position, shooting the arm that is holding his up in the air, the other resting on my bent leg. I look up to see his face, which is focused and betrays only a bit of unease.

Before I can throw him, the sensei claps his hands, indicating this technique is over. I feel disappointed that I couldn’t complete the move, making one more adjustment in the quest to perform it gracefully. Nonetheless, Dad and I stand up and bow to one other. The bow opens and closes each class and each technique, whatever the frustration or accomplishment of the day. It conveys a sense of appreciation for the opportunity to learn from each other. And so my dad bows to me and I to him. On these white, worn mats, we are equals.

We started practicing aikido together when I was eight. What began as a playful way to take our love of Steven Seagal action movies into the real world ultimately became a physical rendering of our father-daughter journey together. Throwing a punch, taking a pounding on the mat, coming at it again in a new way, bending the knees for greater stability-all of these dynamic lessons wriggled themselves far beyond the dojo and into our lives.

Aikido itself originates from many converging disciplines-jujitsu, judo, samurai sword work, military training-all forged together in World War II era Japan by a man named Morihei Ueshiba. The militaristic culture of Japan before and during the war certainly shaped aikido’s development, but so too did the postwar reverberations of how violence and egoism can unleash devastation upon individuals and the society they inhabit. Because of these influences, aikido developed as a powerful, but ultimately peace-seeking practice. The point is not to injure your opponent, even though you have the capacity to do so, but to reach a point of mutual understanding and transformation.

The transformative power of aikido certainly influenced me as I thrust it, fully and from my center, into the crucible of growing up. I learned, from the power of experience on the mat, when to be assertive and make things happen, when to blend with the force of someone else, when to change places as easily as socks. These exercises kept my practice strong. They also kept me grounded throughout the tumult of junior high, when people began to explore and rebel in novel ways. I never needed to rebel against a father who understood how to take turns giving and receiving attacks from his daughter, when to "say uncle," and when to push me a little further. Even as I changed and began playing soccer and wearing mascara, the connection between my wrist and my dad’s hand still existed with the same powerful authenticity and playful regularity that it always had.

Each day saw the transformation of our lives bit by bit-a new job for him, a new grade in school for me-but still we came to practice together. As we got better, the techniques, grabs, and high falls got more complex and more fluid. We were equals there: taking falls, flying through the air, dancing in and around each other. The spirals of wrist movements became the spirals of a father-daughter evolution. Perhaps he could drive a car and balance a checkbook, but I could turn myself out of a hold quietly and roll like a leopard.

Aikido not only provided a goal-training for my first kyu (brown belt) test-it remained a constant source of stability during the uncertainty of my adolescence. Rolling and blending with attacks, getting up again breathlessly, leaping into another series of techniques-always, always coming back to center and learning to extend through that place-such discipline helped anchor me as school became even more difficult, as friends came and went, as my teenage self-confidence waxed and waned according to the whims of fashion or the fleeting attention of a boy.

My first kyu test happened after a flurry of preparation. I had practiced every day for six months to attain the technical skill of the wooden sword and the increasingly advanced arm pins and whole-body throws. Beyond demonstrating this technical expertise, I had to show that I could respond effectively in randori-the ultimate free-form practice of countering any attack with any response-sometimes from only one person, sometimes from multiple.

The minutes go by, person after person comes up to attack me, and the sensei calls out different techniques for me to demonstrate. I feel strong and capable but exerted as the test goes on. Soon it is randori. My dad comes up. Breathing deeply, I soften my eyes to take in everything around me equally. My dad’s gray hair and blue hakama blend into the background of the white dojo and people watching from all sides. His face is focused, his arms out of sight. The attack could spring from any angle, any direction, either hand-or a foot if he wants to throw me off guard.

Finally it comes, a grab to the wrist, and the Father-Daughter Dance begins:

The force of his hold, coming through his body to mine, pushes me back. I stumble and regain my balance. Grounding down, I concentrate on bringing my strength up from that point in my center-my place of power-through my hips, and extending it through my arm. Right then, with everyone watching us, it doesn’t matter that I am 14 years old and he is 48 or that he has 90 pounds and 10 inches on me.

Raising the arm my dad holds, I edge into position, stabilize my feet, and extend up to him. I bend at the knees. Now he simply has to trust. Trust the form. Trust me. Slowly, I lower him onto my back. He leans in, knowing I had trained and practiced all this time just to hold him up right now. His feet lift off the ground. But instead of flipping him over right away, I pause to bounce him around a few times, upside-down, his head poised toward the floor. The sound of laughter rises up from the room.

I grin and hold my father on my back for a few more milliseconds. I’ve got him this time. Then-in a blink-I fling him over me, his turn now to streak through the air, much cooler than any action-figure movie star.

We’ve both come this far together, holding each other up, learning to fly.