Take a seat and ride: Kickin’ back on recumbent bikes.
by Steve Chambers

You’ve seen them. You probably looked down on them, because you had to. They are the low-riders of the bicycle world: recumbent bikes.

Recumbents are fairly novel, but by no means new-the recumbent made its debut in a Geneva, Switzerland bicycle show in 1895. In 1933, a second-rate cyclist named Francis Faure set a world record in the Velodrome d’Hiver in Paris, with an average speed for the hour-long ride of 28 miles per hour. Eight months later, the governing body of professional cycling, United Cyclists Internationale, banned the recumbent from any sanctioned races. That didn’t stop Faure, who, in 1934, set a new record average speed of over 30mph in a non-sanctioned one-hour ride. That record stood for half a century until 1984 when Francesco Moser, riding a specially designed upright bike with an aerodynamic disk rear wheel in the rarefied atmosphere of Mexico City, broke the record, covering 31.784 miles in one hour.

Dead for 45 years, the recumbent made a comeback in 1979, when chemical giant E.I. duPont offered $15,000 to anyone who could break 65 mph on a bicycle. When engineers went to work to design a bicycle capable of such a speed, they quickly discovered the recumbent design was 25-33% more aerodynamic than an upright bicycle. 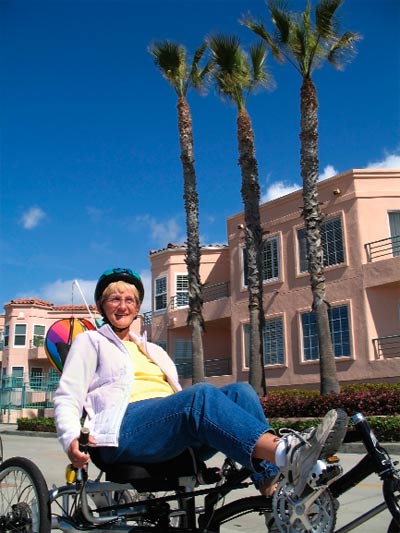 A recumbent bicycle puts the rider in a lower, somewhat reclining position. This has several advantages to the rider, not the least of which are decreased fatigue and increased comfort. Instead of sitting on the ischial tuberosities (the “sit bones”), which are relatively small in area and unpadded when seated, a rider’s weight is distributed over the lower back, buttocks and upper thighs. Because the rider is reclining, almost no weight is borne by the hands and wrists. The rider’s head is in a more natural position on a recumbent than an upright bike, especially an upright with drops (the downward curving handlebars), thus avoiding a stiff neck from holding the head up to see.

Visibility is a problem for recumbent cyclists, though you do get a better sense of what your dog sees. Beyond those inherent dangers, however, recumbents are actually safer than upright bicycles. The lower position means a lower center of gravity and hence a more stable ride. And, when one does fall, the feet absorb most of the impact rather than the hands, wrists, arms or head.

If you’re in the market for a recumbent, expect to pay more than for a comparable upright-mostly because they aren’t mass produced yet. Another factor in price is the seat, which rivals a high-end office chair. Entry level and casual riders should expect to pay $500-$1,000.

Like their upright counterparts, recumbents are made either for comfort or for performance. As a commuter, go for comfort; the aerodynamic design of a recumbant is by default higher performance than most uprights.

Most novices can jump on a comfort recumbent and pedal away, albeit a bit wobbly at first. But expect a few weeks or months of riding to develop the different set of muscles you’ll need to ride as fast or as far as on an upright.

Then there’s the recumbent trike. Don’t think they’re for old folks. Richard Ballantine, author of the 30-year-old million-copy seller “Richard’s Bicycle Book” (now updated as “Richard’s 21st Century Bicycle Book”) writes: “If I had to have just one machine, while intellectually I would say it should be a versatile mountain bike, I’d probably choose a recumbent trike because they are so much fun. You only live once.”

Recumbent trikes come in two styles, the tadpole (two wheels in front, one in back) and the delta (one wheel in front, two in back). Generally, tadpoles are better at cornering while deltas are more stable at high speeds. Trikes are great for errands: The two wheels, either front or rear, provide a solid platform for carrying whatever. They are incredibly stable, eliminating the need to watch out for cracks in the pavement, and when waiting at traffic lights you don’t have to put your feet down. Their novelty means you will almost never lack for a conversation starter when you cruise up. And you always have a place to sit.