Local poet Alex Caldiero in “Life and Sound: A Documentary.” 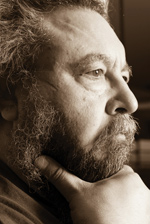 It’s like he’s hitting you with a wall of sound-no, not a wall, it’s a stutter, a refraction, a conversation that bubbles and roils out of his mouth until you think he’s crazy, this bearded Sicilian guy, crazy in a way that makes your heart lurch as if it’s been rung like a bell. He lives in Orem by way of Brooklyn in a house that’s so cookie cutter you can nearly smell the casserole burning.

It’s like he’s hitting you with a wall of sound-no, not a wall, it’s a stutter, a refraction, a conversation that bubbles and roils out of his mouth until you think he’s crazy, this bearded Sicilian guy, crazy in a way that makes your heart lurch as if it’s been rung like a bell. He lives in Orem by way of Brooklyn in a house that’s so cookie cutter you can nearly smell the casserole burning.

But the guy’s a poet. And not just a poet, Alex Caldiero is one of the wild ones, a frothing garden of sound who believes that words are living, breathing things, a species that must be constantly created to be remembered. This is his life, he’ll tell you. He’s a sonosopher, a muse of sound, an intentional fling of voice and amplitude that’s like electricity caught in a jar. He conducts sonic experiments. It’s what he’s here for.

Just over two years ago, Torbin Bernhard and Travis Low, two Integrated Studies majors from Utah Valley University (UVU), decided to make a documentary that would chronicle Caldiero’s life, work and process. Low had no filmmaking experience whatsoever. Bernhard had co-directed one film at the school and had shot some footage. It was crazy. They were neophytes, beginners. They knew almost nothing, but both had their jaws dropped after taking Caldiero’s Language, Most Dangerous of Possessions class (co-taught with Scott Abbott) and then seeing Caldiero perform.

Both say they felt not just inspired to make the documentary and to archive Caldiero’s work, but that they were bound, almost obliged. There had been a bell ringing for a long time and they were the ones to hear it. They couldn’t turn away.

Bernhard and Low approached Scott Abbott with the idea. Abbott was more than enthusiastic. He encouraged them, helped them get money. They set up an editing station at Bernhard’s house and borrowed a camera from UVU’s Cinema Studies program (UVU has no formal Film Studies program). They bought various pieces of equipment with donated funds. They scrapped around and got a grant from the school which they used to go first to New York City with Caldiero and then to Italy. They wanted to get footage of the towns, neighborhoods and landmarks that were important markers for Caldiero and his work. They wanted to record his birthplace and hometown and that of his mother and father, his family’s old vineyard, the streets, the churches, the museums and poetry clubs. They wanted to see his “sites of pilgrimage.”

In May 2008, the three began their journeys. In New York, they filmed in 8 mm and black and white: Wykoff Street, the Bowery Poetry Club, St. Mark’s Church, Caldiero’s second home in America, the third home where there was a brutal fire. Caldiero came to New York from Italy in 1958. He was eight years old. He remembers the boat and the weeks it took to cross the ocean. He remembers seeing the Statue of Liberty, remembers the city rising up like a mammoth in front of him. Caldiero has, Low says, “a visionary image of America … he believes it can potentially deliver on its early utopian visions.” “In 400 or 500 more years,” Caldiero told Low, “I think it might learn.”

After a week in New York, the three flew to Rome. Bernhard and Low wandered the streets with Caldiero and filmed him exploring his “sonosophy experiments” in a variety of environments. They went to the Coliseum and the Vatican. Caldiero was a roving explosion of sound, alternately lecturing and breaking into spontaneous performance. At the Pantheon, a temple built by Marcus Agrippa to all the gods of Ancient Rome and an attraction perpetually thronged with tourists, Caldiero walked to the very center, and began chanting. The building is circular and sits under a coffered, concrete dome, with a central opening (oculus) open to the sky. Caldiero was fascinated with the idea of the Pantheon’s open ceiling as a mouth, as a magnifying glass of sound. He chanted, long vowels of sound rising up like a wind. An old priest told him to stop what he was doing. “Leave me alone,” Caldiero said. “I’m worshipping.”

Worship. For a man devoted to sound as a way to meditate upon the world, worship is one of the direct descendents of his work. Caldiero was an altar boy from age five to 17. By eight he was doing the Latin response to Mass proceedings. Chant. Litany. Matriarchal islander culture. Mediterranean culture. These are the influences that converge in Caldiero’s work. They are the cultural and environmental space from which he draws his inspiration.

And then there’s Sicily.

After leaving “the Vertical City” of Positano, Italy, Caldiero, Low and Bernhard took a ferry across the Strait of Messina, the narrow portion of water between the eastern tip of Sicily and the southern tip of Calab_ria in south Italy.

In Greek mythology, legend states that the sea monsters Charybdis and Scylla guard either side of the natural whirlpool that forms in this narrow strip. Charybdis takes form as a huge bladder of a creature whose face is all mouth and who swallows huge amounts of water three times a day before belching them back out again, creating whirlpools. Had they encountered her, one can imagine Caldiero as a starboard siren, leaning out, mouth a huge, auditory roar battling the sea monster with his favorite vowel sound, “AHHH.”

The three went from Messina, through Frankofonte and Licodea Eubea to Vinzinni. In Ramacca, they attended a conference on Sicilian Language and Identity where Caldiero gave a performance during which he stuffed his mouth with a series of mundane objects: twigs, rags, a watch, rocks.

The Sicilian language is dying out. Low explains that Caldiero speaks an old form of Sicilian that is now rarely heard. It was fossilized in him when he left . Those who live there have lost it and now speak Italian-the outcome of Mussolini’s bans on the Sicilian language and an Italian-only rule in school.

Caldiero himself claims he didn’t discover his language until the 1960s. He’d learned to speak an old form of Sicilian, but had never learned to read it. It wasn’t until he was at a New York bookstore at the age of 15 that he saw Sicilian in print. “I came across a book of poetry that had a strange title,” he says. “I mouthed the words and realized that it was Sicilian.” Caldiero was stunned. He wrote to the author of the book, who wrote him back and said, “Come.” Caldiero traveled to Siciliy for the first time as an adult and went to Aspra a little village by the ocean. Ignazzio Buttita, winner of the Viareggro Prize for poetry, was, Caldiero, “a wild man.”

“He taught me everything,” Caldiero explains, eyes flashing. “We’d stay up for hours and he’d go over my poetry.”

From Ramacca, Caldiero and the two filmmakers stopped at the Ear of Dionysus, a massive, mythic ear-shaped cave on Sicily’s eastern coast. Caldiero and his family went there every year when he was young. It’s a site of pilgrimage and one of the sites where the film records Caldiero’s “trans-environmental” performances. He explores the whirling canals of the cave with sound.

During their nearly three weeks in Sicily, Low and Bernhard often worked 18-hour days, grappling with equipment and learning the grit and heft of filmmaking. They were in extremely close proximity to Caldiero both physically and emotionally. The filming was relentless, the sound overwhelming.

When they returned from Italy, both Bernhard and Low were emptied. They’d compiled nearly 100 hours of footage at this point and neither felt that they had any idea of where the film was going. It was a dark, frustrating time for both. “One day, after watching it,” Bernhard says, “Travis and I were so depressed by how crappy we thought it was that we drove directly to the store and picked up our vices (for me, an energy drink. For Travis, a beer). We changed the title of our editing timeline to something of the effect of: ‘our film reminds us of the burning fires of hell.’ I think that’s right. Basically, we freaked out.”

The two buckled down, read and reread Caldiero’s work, watched the archival footage that they’d acquired, and scrapped a bunch of sequences. They started over.

What’s emerged is an intimate and deeply thoughtful narrative that explores not just Caldiero’s life and works, but the ultimate aim of both film and poetry. Form, structure and technology converge and the film acts as a magnifying glass, recognizing and amplifying the sound and story that is Caldiero. During one of the film’s most intimate rants, Caldiero claims that the act of filmmaking is an act of remembering. “The mother of the nine muses,” he says, “is Mnemosyne. Memory.” A man, he says, may forget nearly everything he just said, but film-film is an act of memory. Film remembers everything.