The low carbon diet: Save money and improve sustainability around the planet! 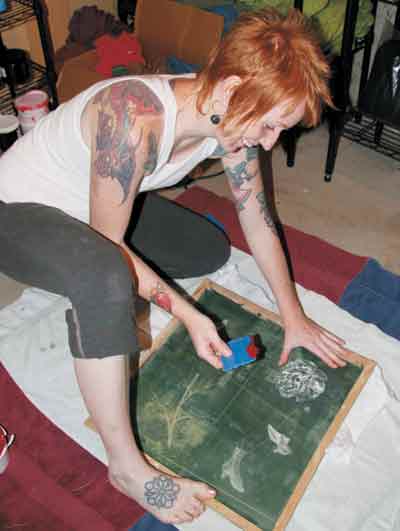 David Gershon’s “Low Carbon Diet” offers a simple way to reduce your carbon footprint. Gershon offers 19 specific behaviors with their CO2 emission estimate—by the pound. His program is designed for you to easily pick which behaviors you want to start with, or which in your life would have the greatest impact. Charts in the back allow you to keep track of your progress to reach the goal of reducing your annual carbon footprint by 5,000 pounds in one month. Like counting calories or keeping an expense report, for beginners, at least, reducing your carbon footprint by 5,000 pounds—and keeping it off—is easy with Gershon’s method. 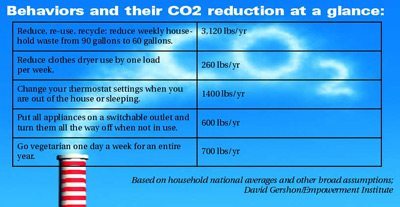 Gershon draws on calculations from a pilot program in Portland, Oregon. For instance, reducing clothes dryer usage by one load a week amounts to a savings of 260 pounds of CO2 per year. Reducing your garbage to 60 gallons a week from 90 gallons amounts to a broadly estimated 3,120 lb savings of co2 per year. Salt Lake City’s Department of Public Services offers 90-, 60- and 40-gallon trash containers with a small monthly savings for the smaller bins.

Using Gershon’s carbon footprint calculator (www.empowermentinstitute.net/lcd), I rang up 26,115 pounds of CO2 annually. The largest single part? Auto use. Gershon places the average household at 55,000 pounds of CO2. Gershon estimates that 25% of the world’s annual CO2 emissions are generated by American home life and purchases. Compare that with Germany’s 27,000 pounds per year household average, or Sweden’s 15,000-pound average.

Recently I conducted a survey at Downtown Alliance’s Live Green festival on Library Square. As an Environmental Studies student at the U, I’m curious about what this “focus group” looks like demographically, how they might prioritize sustainability issues, and how they perceive themselves in terms of practicing sustainable behaviors. While I don’t have the expertise to generate accurate, valid statistics, I thought a few correlations were interesting, if not conclusive.

Most of the 50+ individuals surveyed, of diverse ethnic background, both male and female, from all over the valley, were concerned about global warming and environmental issues. Most described themselves as moderately to very active when it comes to activities such as recycling. While this in no way describes their actual behavior, it seems our neighbors are somewhat open to discussing their carbon footprint and specific habits.

When asked what might motivate people, the majority said “we can’t afford not to” reduce our carbon footprint. No one thought that “Setting a conscious consumer example to developing industrial nations” was a priority. In a recent seminar at the University of Utah given by Doug Mckenzie-Mohr titled Fostering Sustainable Behavior, Mohr’s first imperative was to find out what people resonate with. While I think we must set a good example to the rest of the planet, especially since we teach others on the planet to consume like us, this point is irrelevant to my neighbors.

Professor David Chapman, University of Utah geophysicist, dean of the Graduate School, and man who’s ridden the same Peugeot 10-speed to work for the last 30 years presented “Global Warming: Just Hot Air?” at the 11th annual Stegner Symposium in 2006. Regularly thereafter he continues to present empirical evidence for global warming: his own work with bore hole temperatures dozens of feet below the Earth’s surface; instrumental records, ice cores and glacial and ice shelf melt-offs. Chapman’s research, like the evidence presented in Al Gore’s “An Inconvenient Truth,” is compelling. We the people are in a critical period. What we do today, in terms of habits and value choices we pass on to the next generation and exemplify around the world, will determine whether there will be a quality Earth environment to inhabit for our children and their children. The people I surveyed are right. We can’t afford not to.

If you’re wondering what good a few residents in a town this size can do, consider this. Much of our electricity in the West comes from coal-fired power plants, still a dirty burning fuel. Lower residential demand means we could burn less coal. Autos and auto use, one of the highest CO2 sources due mainly to sheer number of autos on the road, are first and foremost controlled by the individual. Wise auto use and routine maintenance, lower power demands, and reliance on alternative transportation add up to a significantly lower local, regional and national footprint.

The immediate reduction of greenhouse gasses is imperative, as is the shift of ecology of mind. Our ecology of mind in The Great Depression and World War II caused us to tighten our belts, all work together, and conserve for a greater cause. We recognized the interrelationship each of us had and its impact on success. We recognized too our inter-influence, the impact our thoughts and behaviors had on our neighbors. As a friend said recently, we sometimes think sustainable living means depriving ourselves, but the fact is when we put our minds to it we can generate sustainable alternatives to our favorite conveniences. It’s like growing a backyard garden or learning to brew your own beer. Sure, it takes more time, we have to be patient, and we have to practice. In the end, we tend to be highly satisfied with what we get out of that lifestyle.

Gershon’s pilot program in Portland had better success than expected. According to an essay in Moser and Dilling’s “Creating a Climate for Change” (2007), households practicing the diet for four months supported by other neighbors averaged a 6,700-pound reduction. One of the most fulfilling aspects of the diet was the opportunity to pull together with friends and neighbors and support one another while shifting from unconscious habits to conscious consumption and a change of habit. Ordinary neighbors who shared concern for their kids and quality of life were the key to success in Portland. Once somebody stepped up to initiate, others tended to participate. Think what a turnoff it might be if a stranger called and asked about your consumption patterns over a four-month period. Neighbors show an interest and willingness to talk to one another about their experiences; they share problems and successes.

Gershon’s “Low Carbon Diet” places this conversation in concrete and specific terms for the average workaday neighbor. The worksheets in the back of the book make it easy to see progress. Prompts suggest habits to work with in the next round. Tallying a few basic carbon expenses makes tracking your carbon footprint easy to do and easy to communicate to others. While changing habits takes time, focus and practice, new habits eventually become automatic, like walking down the sidewalk. Gershon’s method shows you don’t have to live off the grid for 10 years to practice awareness and change of habit. When it comes up in conversation, and others show an interest, you’ll be able to step up and facilitate a neighborhood eco-team. Who knows? Your friends and neighbors might just be waiting for someone to say: “I’ll walk us through it.”

“The Low Carbon Diet” can be ordered through most bookstores, or you can order it directly from www.empowermentinstitute.net/lcd.

David M. Hoza lived off the grid for 10 years. You can find him at sustainability@diamondpointcoaching.com.