The Geography of the Spirit

From LDS ward house, to punk, then Goth nightclubs, the building that has become Urgyen Samten Ling, the Tibetan Buddhist Temple on Third West has been a gathering place of various sorts for many decades.
-by Leslie Proctor 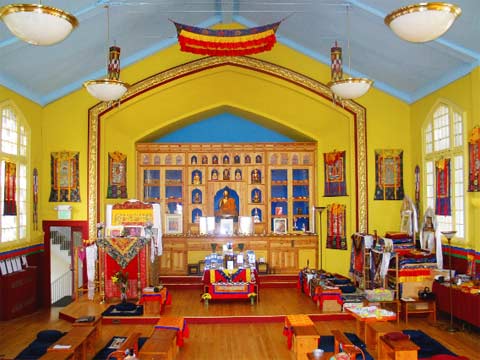 But I have proof for my argument – Urgyen Samten Ling, the Tibetan Buddhist temple near downtown Salt Lake City. I found this amazing place after my closest friend died last year. "Friend" doesn't adequately describe the connection between us. She was more like a twin sister-the one person in the world I could count on to understand me. She lived in Portland, Oregon and I lived in Los Angeles or here in Utah. Yet, even if we hadn't spoken for a month or so, the next time we'd talk we'd find we were reading the same book, thinking the same thoughts. Losing her felt like someone had torn me in half.

When the first anniversary of her passing came, I decided to take the day off and do things I knew that she'd love. It was a day dedicated to my friend Patty.

I have fond memories of sitting in on Patty's meditation classes when I visited Portland. When I found that Urgyen Samten Ling had a meditation class on "Patty's Day," it felt almost like fate. The non-denominational classes, called "calm abiding," are open to anyone.

I went to the class and left feeling I had turned a corner that day. I've returned to the class almost every week. I'm becoming convinced of the veracity of the studies that tout the health benefits of meditation.

And what a space to meditate in! The beauty and peace of the temple is made all the more amazing by the building's history.

The structure at 740 South 300 West started life as a Mormon church. Then it became a punk nightclub called The Pompadour, which was probably a considerable shock to the venerable place of worship. The club changed hands, and the building eventually became The Sanctuary, a Goth nightclub. The entire interior of the building was painted black. Cages and whipping posts were scattered throughout the building.

When Urgyen Samten Ling took over the building, volunteers spent countless hours restoring the building, stripping the black paint from the floors, walls and windows. Kalsang Diwatsang (Ah-Dih), a Tibetan refugee, built an amazing shrine at the front of the sanctuary, intricate craftsmanship in wood held together with dovetails and tongue-and-groove, not nails.

"Urgyen Samten Ling is a place to come and practice compassion, joy and love," said KC Stevenson, a meditation student. "I used to come here when it was a club. Now it's completely different. I come here to get in touch with my spirituality and to take time for myself."

Tibetan Buddhists believe that color enlivens the spirit, so bright colors are seen throughout the temple. While it seems counter-intuitive to a Westerner to think that bright colors could be conducive to meditation and prayer, the space is serene.

"The funny thing about this place is I used to watch bands here when it was a club," said Dustin Robbins, a meditation student. "When I started trying for a spiritual journey, I came back here. Back then it was a place where I went to make connections. Now I still make connections, just a very different type."

On Saturdays, when I arrive for my class, the place is hopping. The building also houses the Red Lotus School of Movement, a Tai Chi and Wing Chun Kung-fu studio. Students of all ages come and go. Volunteers work on the building and grounds. But the minute you take off your shoes and step into the chapel, the sounds fade and peace takes over.

"I have been a part of the Red Lotus family for 10 years," said Toni Lock, a student and teacher at the Red Lotus School of Movement. "To me, our building is a place where one can leave behind the daily grind and find peace. It is also a place where a person can "enjoy being slow," taking time to notice, observe and relax. Also, when you come to either Red Lotus or Urgyen Samten Ling, you have automatically expanded your family."

"Urgyen Samten Ling is a rare place that attracts high Rinpoches and Lamas to teach," said Jay Moreland, M.D., a senior student at Urgyen Samten Ling. "Many of the teachings brought here are even difficult for Tibetans to get; they can hike the Himalayas for days to hear a Rinpoche for once in a lifetime. We don't have to wade through snow to get the teachings from the land of the snow lion!"

The work on and in this building has also changed the neighborhood.

"When we first arrived, there were homeless people sleeping behind the dumpster and trash everywhere," said Arwen Ek, a meditation instructor at the temple. "Now there are art spaces and music venues in the area, and the students from the Red Lotus often go out into the neighborhood to practice. The area has really changed since we arrived."

Prayers for Compassion
The people who helped transform this space now need help to make it their permanent home. They will be holding a "Prayers for Compassion" event July 6-8, 2007 to honor the birthday of His Holiness, the Dalai Lama. Monies raised from the event will go toward a building fund.

If you haven't been to the temple, this event will be a perfect time to visit. You can join in at any time and meditate for a while, have some tea and view the sand mandala which will be created by visiting monks from India.

During the three-day event, continuous prayers and mantras for compassion and harmony will be said. Donors can sponsor malas (108 repetitions of the mantra) for $1 per mala. Sponsorships and donations are tax deductible.

Prayers for Compassion runs from 7 p.m Friday, July 6 through 2 p.m. Sunday, July 8. For more information on the event and to donate or sponsor malas, visit www.urgyensamtenling.org.

Leslie Proctor is a writer and columnist who lives in Holladay.

This article was originally published on May 30, 2007.