The ACLU video series, filmed with intent to inspire

A crowd of angry people stands outside of the city hall building in Hazelton, Pennsylvania. Some of them wave giant American flags. One holds a signs above his head that read "Proud Legal American."These are the self-named "small town defenders" and they are on a crusade to pass legislation in their town that would target and penalize anyone hiring or aiding an illegal immigrant.

This scene opens a documentary on the rights of immigrants in the ACLU video series "The Freedom Files," which currently has nine 30-minute episodes. Each covers a different issue concerning freedom and human rights-the death penalty, the rights of gay families to parent, and other subjects. The documentary continues by following a number of respected community members, who are themselves legal immigrants or native citizens of Latino decent, as they fight unconstitutional legislation being passed in their own middle-American towns.

Spyhop, a not-for-profit arts and media center for youth in Salt Lake City, together with the Utah Chapter of the ACLU, hosted a screening of the documentary last April, along with a lecture presented by Lisa Remington, a member of the production staff for "The Freedom Files."

"Film is especially effective as an organizing tool because it directly impacts your audience in a short period of time," says Remington. Speaking to both filmmakers and activists, she stressed the importance of individual action. "I am going to encourage all of you to film. This is particularly important with a space like Spyhop that can help you through the process."

Film, she insists, is a medium for everyone and especially useful to activists who wish to disseminate their message quickly. "We have such an interesting opportunity with technology these days. There are these little cameras that make it easy to take videos and to upload them onto the web and it can be very entertaining." Never underestimate, Remington reminded her audience, the power of humor.

Of course, not everyone is likely to be inspired to pick up a camera. For those less visually and artistically inclined, Remington also had some advice. "Something that the ACLU and the Office of Grassroots Organizers uses is the motto ‘Educate, Inspire, Act.’ For example, I educate myself and make a video, I then inspire you by showing you the video and from there you challenge your audience to do something."

Remington’s story held particular interest for her Utah audience, since she was born and raised in Salt Lake City. After growing up in Sandy and Holladay and studying acting at New York University, she moved to Los Angeles with the idea of pursuing acting as a career. "It is kind of a joke I tell now that in order to pay the bills I found an office job for adocumentary filmmaker. Because everyone knows that filmmaking doesn’t pay the bills," she says.

More than just paying the bills, what attracted Remington to documentary work was her sense of equality. "I always had a sense of justice and of being the person to stand up for something even when there was no one else." When the Iraq War began in 2003, Remington joined a friend working on a documentary about war protesters. "I started shadowing him, shooting and going to protests. That is when I was first confronted with the question of my own beliefs. It was an interesting moment that through the process of documenting I had to ask myself, where do I stand."

After working on the war project, Remington continued to find jobs in film, but not always with a political slant. She found that she naturally gravitated to films with a purpose and a message that motivated people to action. 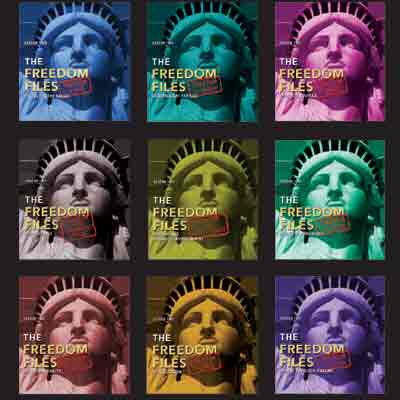 The ACLU’s objective with the video series is to help initiate the process of education, inspiration and action. Individuals can purchase an episode to use as an inspirational and educational tool among friends. An activist information packet included with the video outlines how to organize a home screening and gives some ideas on how to effectively lead a post-screening conversation. Plus, the packet gives ideas on how to take that collective energy and turn it into action.

In closing, Remington reminded her audience of the importance of taking action, and the power of film. Her words of inspiration remained short and to the point, just like the films she advocated. "Just do it," she said, reading directly from the words on her PowerPoint presentation and chuckling a bit. "Just do it."

Spyhop is located in downtown Salt Lake City. Since they began in 1999, the have provided hands-on mentoring and experience-based multimedia learning for thousands of youth. Upcoming classes in June include Intro to Filmmaking, Sound Engineering, Flash Animation and others. Check out the program schedule and find out how to apply on line at www.spyhop.org.

About the ACLU Freedom Files

"The Freedom Files" is now in its second season, covering new issues such as "Torture and Unlawful Imprisonment" and "School to Prison Pipeline." To purchase the films, along with an activist’s toolkit, a teacher’s guide and other useful information, go to www.aclu.tv. To contact the Utah chapter (355 North 300 West), go to www.acluutah.org or call 521-9862.