The air, somewhere, is improving

Logan is the first of the PM2.5 nonattainment areas in Utah to meet federal air quality standards

Last month, Logan, Utah achieved what often seems impossible: a clean air rating from the EPA. Like many of Utah’s mountainous urban spaces, Logan was long listed as a PM2.5 nonattainment area, but after three consecutive years of improved air quality it became the first of the nonattainment areas in the state to meet the current air quality standard. What the rest of the state should be wondering is: How did they do it and can their success be replicated?

A history of nonattainment

In 2006, the EPA tightened the National Ambient Air Quality Standard (NAAQS) for PM2.5 pollution – the fine particulate matter pollution that builds during winter inversions and causes serious health effects – lowering acceptable levels from 65 to 35 micrograms per cubic meter. In November 2009, the EPA designated three geographic areas of Utah as nonattainment for PM2.5 pollution: Provo, Salt Lake (including Davis, and parts of Weber, Box Elder, and Tooele Counties), and Logan (including Franklin County, Idaho). The EPA required the state to develop a plan specific to each nonattainment area in order to reduce pollution to levels below the NAAQS. These nonattainment areas then had three consecutive calendar years to show they were meeting the new standard.

In Logan, the Utah Division of Air Quality, county officials and the Bear River Health Department collaborated to develop a plan. Since there are no large industrial sources of air pollution in the Logan area, the plan focused on reducing emissions from vehicles, homes, buildings and small businesses.

Emissions inspections for passenger cars and trucks seem to many like an obvious path to cleaner air. Yet six years ago, Cache County leaders voted against adopting an emissions testing program because they were skeptical such a program would do much to reduce local air pollution. In 2014, after falling into nonattainment, the county reconsidered their stance on vehicle emissions testing.

To enhance the emissions testing program, the state applied for and was awarded nearly $2.5 million in funding from the EPA’s Targeted Airshed Grant program. The money helped replace old diesel school buses with cleaner models and created the Cache County Vehicle Repair and Replacement Assistance Program, providing grants to qualifying vehicle owners to repair or replace their vehicles that fail emissions testing in Cache County. The amount of financial assistance provided by the grant depends on household income, and varies from up to $1,000 for a repair, or up to $5,000 for replacement.

Since older vehicles typically fail emissions testing at a higher rate, replacing them with newer and cleaner vehicles has a significant impact on reducing vehicle emissions. Logan will also benefit from another round of targeted airshed grant money for rebates on replacing medium- and heavy-duty diesel trucks from model years 1999-2006 with trucks that meet the most stringent emissions standards.

Logan also adopted a no idling ordinance, in 2014, in hopes of raising awareness of unnecessary emissions and prompting a behavior change in residents. 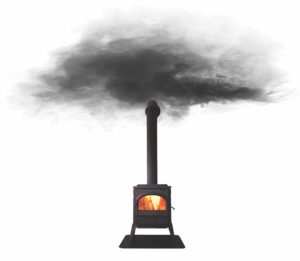 Wood smoke is a significant source of air pollution in the nonattainment areas of Utah (see CATALYST January 2018, When Smoke Gets In Your Eyes and Lungs). A recent emissions inventory conducted by multiple agencies including the National Oceanic and Atmospheric Administration (NOAA) found that Cache Valley, in particular, is heavily burdened with wood smoke in the winter. To combat the effects of wood smoke, Cache County is subjected to the same burn restrictions as the other nonattainment areas. From November 1 through March 1, residents are prohibited from burning wood or coal on no burn days. The Division of Air Quality calls for voluntary restrictions as air quality creeps towards unhealthy levels, and proceeds to mandatory once pollution levels reach the unhealthy mark.

The Division of Air Quality applied for, and was awarded, a targeted airshed grant for roughly $3.2 million to fund the Logan Wood-Burning Appliance Changeout Project to further reduce residential wood smoke emissions by changing out or removing wood-burning appliances and uncertified wood stoves.

Regulators claim public outreach and education and citizen-led efforts have been another effective tool for reducing emissions. In 2013, local residents launched the Cache Clean Air Consortium (CCAC), a non-profit affiliate of Breathe Utah. CCAC promotes behavior changes that reduce individual emissions, such as idle-free campaigns, bike challenges, solar bulk purchase programs, and clean air poster contests for schools. The organization holds clean air conferences and events throughout the year. Breathe Utah’s Air Aware K-12 education program brings air quality education into the classroom (while meeting core standards) and is also used in drivers ed programs. Kids today are the drivers and consumers of tomorrow. We need to equip them with an understanding of Utah’s unique air quality challenges and ways they can individually help lessen the problem.

Once an area, like Logan, receives a Clean Data Determination and continues to meet the standard, the EPA no longer requires the submission of new air quality plans. The rules and regulations that helped Logan achieve attainment will continue in place and the area will continue to be monitored to ensure pollution levels remain below the NAAQS. The road to reclassification as “attainment” is long and winding and can take 20 or more years of applications, monitoring and crafting a maintenance plan that continues to yield positive results.

Weather and geography will certainly play a role in Logan’s air quality. Like the other nonattainment areas in Utah, Logan is prone to wintertime inversions that trap emissions and build air pollution to unhealthy levels for several days. A mild winter can alleviate some of the woes that come with inversions, but a particularly bad winter, like the winter of 2013, can bring trouble for the monitors, and more importantly, people’s health. A few tough winters in a row could bring the area back to nonattainment. If the area does violate the standard, the Clean Data Determination will be rescinded, and the state would be required to submit a plan revision.

The Clean Data Determination for the Logan nonattainment area is wonderful news and proof that it is possible for the other nonattainment areas in the state to meet the standard through the developed State Implementation Plans. Thanks to similar rules and regulations, plus controls on large industrial sources, the Provo and Salt Lake nonattainment areas are also on their way to achieving a clean recognition.

Ashley Miller, J.D., is the program and policy director for Breathe Utah. She is the vice-president of Utah’s Air Quality Policy Advisory Board and on the Salt Lake County Health Department Environmental Quality Advisory Commission.