Tale of a wicked weed: Foxtails

Foxtails: Don’t let your pet near them

The barbed grass may look beautiful as it blows in the breeze, particularly in the spring when it is supple and green, but foxtail (a self-seeding annual grass) is a serious danger to pets and livestock.

Farmers know this, and urbanites are learning….the hard way. Due to a wet spring, this weed has spread like wildfire and is invading the city as well. Veterinarians across Utah are seeing an increase in cases of foxtail. Foxtails are most dangerous right now, in the hottest parts of the year when they start to dry out and seed. If those who remain among us don’t already know what a foxtail is, it is time to find out.

The term “foxtail” is used by veterinarians as a catch-all term for any type of barbed seeds, or ‘awns’ that get caught in a dog or cat’s fur or skin, explains Utah State University weed science expert Corey Ransom. There are in fact several varieties, including foxtail barley, green foxtail, yellow foxtail, spear grass, cheatgrass (downy brome) and junegrass. Some strains like foxtail barley (the most common variety in Utah) and Medusahead have longer barbs and may therefore be more treacherous to animals, but none of them are good for your pets, says Ransom.

How is foxtail a hazard to my pet?

Those little spiky barbs are worse than you might think. Foxtail seeds attach themselves not only to dogs’ (and less commonly cats’) fur and paws, they can also get sucked in through their nostrils as they sniff the ground or get caught in the mouth, ears, tonsils, third eyelid, penis, vagina or anus. Once attached, their fish hook-like shape allows them to burrow into and under the pet’s skin. Inside, they do not break down, but (yes, this sounds like science-fiction) instead migrate through the body. At this point, foxtails often cause infection, and in rare cases are fatal. Foxtails can puncture eardrums, lungs and other vital organs if gone unchecked, and can even migrate into an animal’s brain.

Last year ​KUTV reported​ that a local Norwegian elkhound/poodle named Vivian got a foxtail that migrated into her chest where it formed a lump. The veterinarian drained the lump and believed it was no longer of concern, but the pup got an infection that turned into pneumonia. Vivian passed away at just 18 months of age. ​In another 2018 local case​ a two-year-old Malinois police dog ingested foxtail. Fluid built-up around the dog’s lungs and he passed away during surgery.

While foxtail-caused death is uncommon, many animals often go through a tremendous amount of pain and stress due to this rampant weed, and for the owner there are financial costs as well.

How do I tell if my pet has a foxtail? 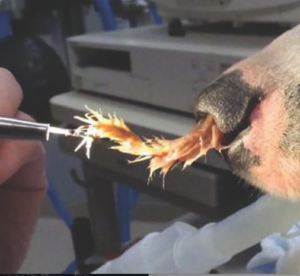 Sharmon Gilbert, a local veterinarian and Washington State University graduate, is no stranger to foxtails. She sees them every day, often several times a day at her clinic.

Gilbert gave CATALYST a few warning signs to be aware of regarding foxtail and our pets:

Head shaking can mean that your pet has a foxtail in its ear canal. Excessive sneezing or discharge from the nose or an eye could be a sign of foxtail in the nose or eye. If you find your pet scratching or licking its paws or other areas, this is often an indication of foxtails. Lastly, any “general signs of pain” should always be examined. It is more than a good idea to have your pet checked for foxtails at each vet visit because foxtails can be difficult to find and pets don’t always exhibit warning signs.

What do I do if my pet gets a foxtail?

Gilbert says that if you are able to locate a foxtail in your pet’s paw, you can try to pull the foxtail out with tweezers. If this doesn’t work, or if you find one in your pet’s eye, ear, nose, or elsewhere, take your pet to the vet right away. If your vet is unable to see you immediately and your pet has already developed an abscess between its toes, soak your pet’s foot in warm water or apply a warm compress four or five  times a day to help with pain and increase blood flow to the area.

Foxtails in the city

Despite the fact that they are such a prevalent nuisance and harmful to pets, the most common kind of foxtail in Utah, foxtail barley (Hordeum jubatum)​, is not listed on the state’s noxious weed list. Salt Lake County’s Bee and Noxious Weeds Program Manager Sage Fitch says that is because, “Under state law, only non-native plants can be considered noxious, and foxtail barley is native to the region.” Because they are not considered noxious by the state, there are unfortunately no specific ordinances to regulate their spread.

Because foxtails can grow from one to three feet tall, Salt Lake City’s ordinance 9.16 gives citizens a way to voice complaint about overgrown foxtails on private property. Under this ordinance, weeds and grass must be cut to six inches or less.

However, particularly where people don’t water their lawns, the plants may have quickly  gone to seed before reaching that height. Because the city does not generally intervene when it comes to most foxtail varieties, the job is left to us. (See sidebar for foxtail control.)

How do I identify foxtail?

Fortunately foxtails share a common profile, so no matter the strain, you can typically identify them without pause. Foxtails share their colloquial name because they all have hard tips and spikey, bushy awns that resemble a fox’s tail.

One plant that ​is​ sometimes confused with foxtail (particularly on farms) is timothy, a perennial grass eaten by livestock and rabbits. Foxtails, on the other hand, are annuals that go to seed in the spring and then die in the fall. Some varieties of foxtails have seed heads that droop. If you don’t see this dead giveaway, the next most obvious difference to look for are the awns. Foxtails have these barbed seeds, but timothy does not.

What preventive measures I can take against foxtail?

When it comes to your pet, Gilbert says the best thing you can do is learn how to identify foxtail. Be aware of  it in your neighborhood and wherever you walk with your dog.

Stick to cleared paths. Ransom explains that while foxtails tend to grow in wild areas like open fields and on mountainsides, they also are found in parks, parking strips and yards if the grounds are unhealthy and unkempt. He says they grow all over the state, and that on a recent visit up north, “they were everywhere.”

For these reasons, it is best to maintain one’s own yard and be aware of the fauna wherever you walk your pup. Just as important, Gilbert says, is to check your dog’s fur and between its toes after outdoor adventures.

If you live in an area with a lot of foxtails and they become a nuisance to your pet, shaving its feet can help prevent foxtails and make them easier to find. Dogs and cats with thick coats of hair are even more at risk of getting foxtails caught in their fur and skin. Gilbert says she had a Great Pyranese in recently who would cry out in pain every time it was touched. When they shaved the pup, they found foxtails all over its body. If your dog’s breed allows, giving your thick-coated pet a shave in the summer will help keep it cool and prevent foxtails.

We animal lovers at CATALYST wish you and your pet a carefree end of summer now that you have expanded your base of pet-care knowledge! Happy trails!

Kaleigh Stock is a recent English graduate from Weber State University and a former CATALYST intern.

How to outfox foxtail

In our neighborhood, foxtails are appearing in the untended (unwatered, unmowed) lawns of rentals and yards whose owners are trying to conserve water. Xeriscape means low water, and planting vegetation that thrives on little water.  It does not mean “no water.”

Zeroscape is not a word, but could mean “the practice of abusing and neglecting your yard.” In which case, foxtail thrives in a zeroscape!

If you spot foxtail in your own yard, here are some suggestions: