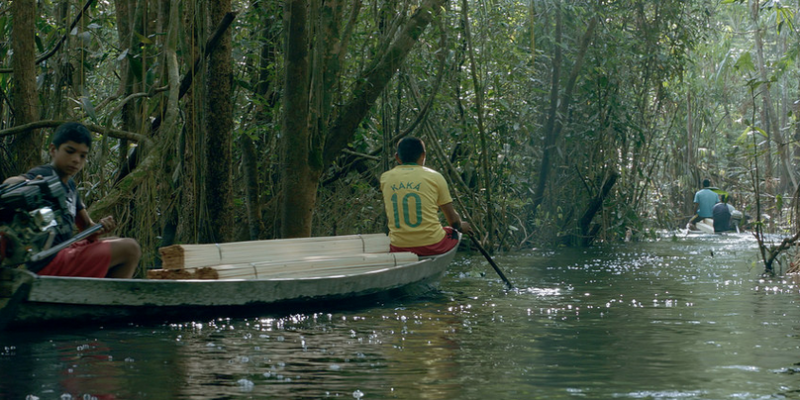 Billions of trees are cut down each year. This should be no surprise, considering deforestation is a topic we’ve discussed since grade school. Instead of focusing on a forest, however, Swiss director Daniel Zimmerman documented the journey of a single fallen tree. At a special screening at the 2019 Sundance Film Festival, Walden, a film comprised entirely of 360-degree shots, transports seemingly ordinary wood halfway across the world. The 13 slow-panning scenes last about nine and a half minutes each and significantly highlight each step of the lumber’s journey through the 106-minute film. The start and end points are not what you would expect. Zimmerman follows as the tree is cut down in Austria, and as the lumber is moved to the Amazon, a startling twist. A viewer would expect the route to be the opposite, making the film’s conclusion quite extraordinary.

The start of the documentary is just as astonishing as the end. The film begins with a 360-degree horizontal rightward sweep of a beautiful Austrian forest, where everything is seemingly ordinary. Birds are chirping, insects are buzzing and greenery sways with the wind. The natural landscape is quickly interrupted by the sound of a chainsaw and the felling of a tree. The scene shifts and the overwhelming sound of machinery commences. The lumber is tracked as it’s loaded onto a train and then onto a truck, where it is inspected by the police in a downpour. The timber continues traveling by truck and boat until it reaches the middle of the Amazon rainforest.

The most fascinating aspect of the film was the steady 360-degree pan, kept at a constant velocity for the entire length of the documentary. The shots were so smooth, it made me wonder how it was done. During the Q & A at the end of the film, Zimmerman mentioned how the camera equipment rotated automatically. Still, it’s a mystery how the camera itself was unscathed through the harrowing weather conditions. We’ll have to attribute it to the phenomenal camerawork and editing of the crew.

The team had to make vital choices during the editing process. A single decision made by Zimmerman is perhaps one of the most important he could have made. No music, no narration and no dialogue whatsoever accompany the film. The only sounds heard are that of the natural environment itself. A viewer relies on the sounds of the environment entirely to make assumptions about each scene and about the documentary as a whole. Music, narration and dialogue typically persuade an onlooker one way or another, so Zimmerman’s choice was a powerful one.

I’d be lying, however, if I didn’t mention my intense boredom halfway through the film. It was obvious I wasn’t the only one, especially when several attendees got up and left before the end. But while the film itself might not be entirely captivating, the message it sends is. Zimmerman attempts to make a statement about the life and death of forests by following the transportation of a tree from Europe to Brazil. This is evident in the second 360-degree sweep, where numerous trees lie felled near the train. These brief images were impactful and left me pondering for hours after the credits had rolled.

Zimmerman’s silent commentary on globalization and nature is paramount, especially in a world where products are regularly transported across the world. The documentary truly forces one to contemplate human intervention in a natural environment. Currently, Walden can only be viewed at film festivals across Europe and the United States. Stay up to date by visiting the official website.