I know Chip ward personally as a librarian and as an environmental activist. He wrote the non-fiction Canaries on the Rim (1999) about pollution and radioactive waste in Utah’s West Desert which has become an environmental classic. I didn’t know that Ward was secretly writing a novel until Stony Mesa Sagas appeared. I took it with me on summer vacation to read at the beach. It’s a mystery and amusing light reading, but at the same time, if I could pick one book to do a community read with everyone in Utah, it might be this one.

Stony Mesa Sagas is a novel in three parts. In part one, “Luna Waxwing and the Neon Monster,” Ward channels Carl Hiaasen, who has written some of the best environmentalist beach reading of all time. Hiaasen, if you haven’t read his books, is sort of the Edward Abbey of Florida—he writes satirical environmental thrillers in which evil developer/polluter/ poacher bad guys die suitably undignified deaths.

Ward’s Part 1 bad guy has the ridiculous name, Bo Hineyman. He’s an out-of-state rich guy who has built a gigantic, neon-lit tourist trap in the national park gateway town of Stony Mesa (a composite of Torrey, Boulder and Escalante, Utah). Luna Waxwing is his estranged daughter who is involved in protesting nearby tar-sands developments. Hijinks ensue.

In other words, Stony Mesa Sagas is a bit of a roman à clef. It’s not hard to identify who Elias Buchman is (Chip Ward himself, of course), or Bunny Cleaver (Cliven Bundy, I presume). The stories are clearly fictional, but at the same time they are based on familiar Utah conflicts —   ranchers vs. developers, cowboys vs. Indians, oil & gas industry vs. public lands, insiders vs. outsiders. It seems that after he wrapped up Part 1 Ward wasn’t satisfied with just taking literary revenge on environmental bad guys so he kept writing.

In Part II, “Tricksters Bones,” his characters start the hard work of trying to find a better resolution than just killing off metaphorical bad ideas. The controversy is over the sale of a ranch to build a fancy gated development called the Highlife Holliday Estates. The rancher feels defeated by the hard life he has lived and wants to get rid of the place. His heartbroken daughter wants to live on the land but doesn’t have enough money. The conflict becomes less black-and-white as Ward starts to deal with the intergenerational conflict. What does the older generation owe to younger people who will inherit their messes and mistakes?

In Part III, “Navigating a Fickle Shore,” the small town of Stony Mesa is finding its way into the future. A new generation has been born (the rural town won’t die out after all). The lonely Mormon woman has found a Latino boyfriend (yes, we can all get along). The awful tourist trap from Part I has been transformed into a community center where people with different views can engage in respectful community dialog. The bad guys are outsiders trying to stir up the old arguments and hatreds in the interests of corporate profits. The residents of Stoney Mesa, though, have found a new strength in community and this time around they are not going to fall for it. 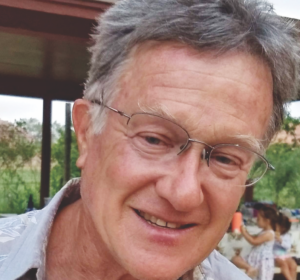 Recently, Ward gave talk on “Fiction as a Force for the Environment.” Libraries serve everyone and Ward’s radically inclusive librarian perspective is not only more gentle than Hiaasen’s raw anger regardingh the destruction of beloved places, it offers a more practical solution.

In the past, Utah has been able to cut across the urban/rural divide and work though public lands arguments to find good compromise solutions, but only when all stakeholders are honestly invited at the table.  Since the election of President Trump, bad guys have been trying to tear our community apart by stirring up the old arguments and hatreds. The people who live in Chip Ward’s fictional town of Stony Mesa would run them out of town.

Amy Brunvand is a poet, a University of Utah librarian and a longtime contributor to CATALYST. Recently she won the Alfred Lambourne Prize in literary arts for A Crown of Sonnets for Great Salt Lake.