by Bruce Lipton and Steve Bhaerman

Our positive future and a way to get there from here. If caterpillars can do it, why can’t we? 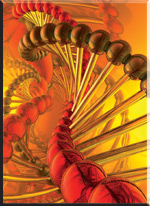 We are in a world of crisis. From economic collapse to environmental decay to climate change to war, hunger and poverty, our species seems to be headed fool speed ahead on a fast track to a train wreck.

But what if these crises presented the greatest opportunity in recorded history—conscious evolution?

The good news is that biology and evolution are on our side.

Contrary to what conventional science and religion have been telling us, evolution is neither random nor predetermined, but rather an intelligent dance between organism and environment. When conditions are ripe—either through crisis or opportunity—something unpredictable happens to bring the biosphere into a new balance at a higher level of coherence.

We are in a world of crisis. From economic collapse to environmental decay to climate change to war, hunger and poverty, our species seems to be headed fool speed ahead on a fast track to a train wreck.

But what if these crises presented the greatest opportunity in recorded history—conscious evolution?

The good news is that biology and evolution are on our side.

Contrary to what conventional science and religion have been telling us, evolution is neither random nor predetermined, but rather an intelligent dance between organism and environment. When conditions are ripe—either through crisis or opportunity—something unpredictable happens to bring the biosphere into a new balance at a higher level of coherence.

While we often perceive of examples of spontaneous remission as miraculous healings that happen by the grace of God, looking a little deeper we see something else at work. Quite often these fortunate individuals actively participate in their own healing by consciously or unconsciously making a key, significant change in their beliefs and behaviors.

So here is the bad news and the good news. The story of human life on Earth is yet to be determined. Spontaneous evolution will depend on whether we humans are willing to make changes in our individual and collective beliefs and behaviors, and whether we are able to make these changes in time.

For millennia, our spiritual teachers have been pointing us in the direction of relatedness and love. Now science is confirming that ancient wisdom. We are each and all cells in the body of an evolving giant super-organism we call humanity. Because humans have free will, we can choose to either rise to that new level of emergence or, in the manner of dinosaurs, fall by the wayside.

Like it or not, our future depends on the choices we make as a species.

All you need is love–really!

From Jesus to the Beatles, we humans have spent the past 2,000 years hearing—and resisting—the message of love. Perhaps now that science is echoing ancient wisdom in this regard, we might actually heed the message.

Thanks to the current paradigm of scientific materialism, most of us believe (if not consciously, then unconsciously) that life is a dog-eat-dog rat race, a dire competition where only the fittest survive. However, science now tells us that this Darwinian view is distorted. In actuality, environments survive and evolve as systems. Whatever helps to balance that system thrives, while that which doesn’t fit doesn’t survive. Thus, the real evolutionary principle is survival of the “fittingest.”

Our planet is facing what scientists are calling the Sixth Great Mass Extinction. The previous five were apparently caused by objects from outer space, such as comets or asteroids, hitting Earth. This time, the cause comes from “inner space” – our own invisible beliefs that have spun us outside the web of life. Beginning with monotheistic religion telling us that we humans are superior and apart from other creatures on the planet, exacerbated by scientific materialism insisting human technology has the power to “conquer” nature, we have focused so heavily on our fitness as individuals, we have failed to recognize that our fitness as a species is up for examination.

However, the most transformational tool in our human toolkit—and the one we’ve largely ignored for the past two millennia—is love. This love we are talking about is not some mushy-gushy sentiment, but the glue that holds our world together. According to Dr. Leonard Laskow, a surgeon who discovered his own innate ability to heal with love and wrote a book with the same name, “Love is a universal pattern of resonant energy.” In this sense, two or more tuning forks vibrating together are in love with each other, just as two or more humans can resonate in a palpable field of connectedness, joy, and even ecstasy. Love, he said, “is the universal harmonic.”

If indeed love is a resonant harmonic, then a case can be made for evolution being the evolution of love itself. From the first spark of life ignited by the wave of light impregnating the particle of matter on Earth, every stage of evolution has involved two things: greater connection, and greater awareness.

While we should beware of anthropomorphizing cells—they hate it when we do that—in a very important sense, when single cells joined to become multi-cell organisms, they “surrendered” to a higher level of organization, and “agreed” to live in harmony. In other words, love.

The same has been true of individuals affiliating in tribes, and tribes affiliating as nations. At each stage, individuals (or groups of individuals) have become aware of how connecting in community would enhance their wellbeing. Taking a cue from the Iroquois Nation, America’s founders designed a system where individual states gave up their right to arm themselves against one another. Think for a moment what it would have meant for states to have armed borders, and the inevitability of a border skirmish. Clearly, America’s prosperity has been due in part to not having to spend precious resources defending against other Americans.

On a worldwide scale, imagine what we could do with the trillions of dollars we spend on weaponry. Certainly, an argument can be made that while the vast majority of us may be peace loving, we would still have to defend ourselves against those who aren’t. This is true. However, we are all too commonly mobilized by our “leaders” against a perceived enemy, when in actuality the true “enemy” is the field of beliefs that reinforce an absence of love – and the misleaders who manipulate that field.

A world in crisis=a world of opportunities

Meanwhile, in the collective consciousness there has been a growing awareness that, to quote Dorothy, “We’re not in Kansas anymore.” Whether it’s the evangelicals speaking about the Rapture, scientists warning of the Sixth Great Extinction, or those who see “2012” as some transformational watershed date, there is an understanding that we are on the threshold of profound change.

As we are seeing every day in the news, old structures and ways of being seem to be crumbling all around us. Our institutions—from hospitals to schools to banks to our own government—are failing, and seem to be unfixable. What’s going on?

To better understand the opportunity hidden in the crisis, consider the tale of another world in transition. Imagine you are a single cell among millions that comprise a growing caterpillar. The structure around you has been operating like a well-oiled machine, and the larva world has been creeping along predictably. Then one day, the machine begins to shudder and shake. The system begins to fail. Cells begin to commit suicide. There is a sense of darkness and impending doom.

From within the dying population, a new breed of cells begins to emerge, called imaginal cells. Clustering in community, they devise a plan to create something entirely new from the wreckage. Out of the decay arises a great flying machine—a butterfly—that enables the survivor cells to escape from the ashes and experience a beautiful world, far beyond imagination. Here is the amazing thing: {quotes} The caterpillar and the butterfly have the exact same DNA. They are the same organism, but are receiving and responding to different organizing signals. {/quotes}

That is where we are today. When we read the newspaper and watch the evening news, we see the media reporting a decaying caterpillar world. And yet everywhere, human imaginal cells are awakening to a new possibility. They are clustering, communicating, and tuning into a new, coherent signal of love.

We are now between “two worlds” —the caterpillar world where our future is limited by our creepy-crawly past, and the butterfly world where humanity can soar to reach its highest potential. Unlike the shift from caterpillar to butterfly, however, transformation of humanity is not inevitable. It requires our participation. We have the choice to live in and reinforce the limitations imposed by fear and past programming. Or, we can attune ourselves to the new signal of love, and live that instead.

A three-step program for “spontaneous remissioning”

If we are to survive and thrive as a species, we must consciously shift our mission from individual survival to species thrival. While there is currently no 12-Step Program for a species “recovering” from 5,000 years of civilization, we are offering a Three-Step plan because frankly, we don’t have time for all 12 steps. The steps are Awareness, Intention and Practice.

Since we are on the cusp of conscious evolution, the first all-important step is to become consciously aware of what science now tells us about the nature of human nature. The four fundamental beliefs of scientific materialism have been—inconveniently—disproved by science. When we recognize that so much of who we imagine we are is based on programmed “invisible” beliefs, we can begin to recognize that this programming is the one thing we have in common. The entire notion of “blame” at that point seems absurd. As the Biblical injunction says, “Forgive them because they know not what they do.”

In this forgiveness and liberation from blame, we can accept responsibility. That is, we can choose to respond differently. Consequently, the next healing step is to make an intentional choice to release obsolete beliefs and divest from the “caterpillar” institutions and mindset, and instead invest in the new butterfly society that is emerging locally and globally. The community of “imaginal cells” that sociologist Paul Ray calls “cultural creatives” has grown in just over 10 years from 50 to 70 million adult Americans. We can choose to combine our own mission with that of this new organism, to weave a web of mass construction, so the butterfly can rise as the caterpillar falls.

That brings us to the final step. {quotes align=right} Now that we know what science is telling us about the true nature of human nature, what do we do about it? {/quotes} How do our lives become different as we come to recognize ourselves as cells in a new organism called Humanity? How do we liberate ourselves from our personal and collective programming of limitation? What practices do we adopt on a daily basis that remind us of who we truly are? Evolution – like heaven – is not a destination, but a practice.

A miraculous healing awaits this planet once we accept our new responsibility to collectively tend the Garden rather than fight over the turf. When a critical mass of people truly own this belief in their hearts and minds and actually begin living from this truth, our world will emerge from the
darkness in what will amount to a spontaneous evolution.

Bruce Lipton and longtime CATALYST contributor Steve Bhaerman are the authors of “Spontaneous Evolution: Our Positive Future and a Way to Get There From Here.” Lipton is an internationally recognized authority in bridging science and spirit and a leading voice in new biology. http://www.brucelipton.com. Bhaerman is an author, humorist and political philosopher, also known as his comic alter ego Swami Beyondananda. http://www.wakeuplaughing.com