The black cherry tomatoes are climbing the trellis of branches, growing an archway over the white wooden gate. The corn stalks are turning the color of the red rock slabs nearby that fit together with jigsaw puzzle perfection forming a snaking bench down the line of the street. The Swiss chard, half harvested, adds color and shape between the raised rock patios and solidly balanced stone coffee table tops. Lovingly crafted, Timmi Cruz’s urban garden and community gathering space on the parking strip around his home two block from the CATALYST office was just coming into perfection in June when a complaint was lodged with the city about activities on the parking strip.

The city mailed a warning letter stating that a permit is required when seeking major changes to a park strip. When Cruz responded to the letter he was told to meet with the Develop­ment Review Team (DRT), a group of city employees from various departments – transportation, utilities, zoning – who could discuss the specific violations and the steps for receiving the revocable permit needed for construction. According to the city, after that first meeting Cruz never attempted to follow up with the DRT.

There is no way to adequately describe the divinely inspired beauty of the parking strip in question. Found on the corner of 300 South at 10th East, it’s a creation that is hard to miss – inviting, aesthetic and organic in design. After Cruz went MIA, the DRT resumed the case, mailing an order letter stating that, should progress on the case not be met through removal of the construction or an appearance with the DRT to assess potential solutions, a civil fine of $25 per day would be levied. With no response, on September 22 they mailed the final five-day warning.

A true community effort, built with the help of neighbors, friends, housemates and family, the parking strip garden, says Cruz, “was built for the purpose of education and inspiration. It is a vision of what we can do.” What this particular garden has done is bring together neighbors and a neighborhood – the garden extends over two properties. Sustainable, with no grass in sight, it requires a fifth of the water used by a regular lawn. It grows food. It maintains the peace of a Saturday morning without need for leaf blowers or lawn mowers. It transforms into an impromptu front yard concert space. Passersby stop, look and often sit for a while. 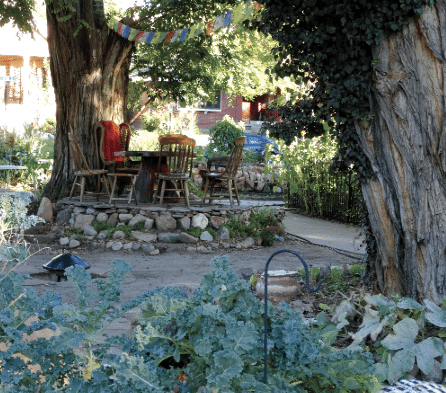 For the city’s engineering department, the problem is with lack of blue prints and the structure’s interference with public-right-of-way and pedestrian movement. The rock patios are a problem for the public utilities, obscuring access to underground infrastructure – Cruz contends that the asphalt street also interferes with access to pipes and lines, with the simple solution being to tear up the surface if and when access is needed. The transportation department worries about the rock benches being within 18 inches of the curb, a problem for car doors. Zoning mentions the need for at least 33% of a strip to have green landscaping and heights not exceeding 18 inches for traffic/driver visibility.

“What it comes down to,” says Craig Weinheimer, legal investigator for Salt Lake City’s department of building services, “is that a rock wall can’t be in the parking strip. Likely, in order to comply, it will need to be removed.”

Neighbors have already written letters in support of Cruz and his garden. Friends, like Mele Tua’one of Mololo Gardens who is creating posters for distribution around town, are rallying for the garden’s preservation. Cruz has yet to report back to the city. When he does, he will likely get a stay of execution.

“If there are visible improvements or documentation of him seeking a permit application, we can work with him,” says Weinheimer. For now, Cruz is pulling together his materials and hoping to find an engineer to assess his structure. Hopefully, the narrowness and restrictiveness of current zoning laws will not spell doom for this brilliant and enhancing addition to our community before a compromise can be reached.

This article was originally published on September 29, 2014.