Shall We Dance: The Return of the Nutcracker

Or why too many nutcrackers are just enough.
“The Nutcracker has become not just popular but an epidemic!”
—Willam Christensen (aka Mr. C) 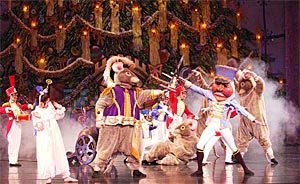 Many years ago my sister and I took a trip to Paris (the one in France, not the one in Idaho). One evening we decided to go to the Paris Opera mostly for the sake of spending an evening inside the grand, phantom-haunted building. It was near Christmas time and the only thing playing was the Nutcracker ballet. We had already seen the Nutcracker a zillion times, but even more discouraging, the only tickets left were advertised as “sans visibilité” (no visibility).  “Vraiment, sans visibilité?” my sister inquired, in her best college-French accent. The lady at the ticket booth measured a space between her thumb and forefinger and squinted through it to indicate that, in fact, one could actually see a portion of the stage. At least the tickets were cheap, so we bought them.

Maybe we couldn’t see the dancing very well, but our sans visibilité seats gave us a splendid view of the Chagall mural painted on the Opera House ceiling.  What we could see of the production was strangely gloomy. The character of Clara seemed buffeted by Freudian undercurrents, and what’s more, before they encountered the Sugarplum Fairy, Clara and her nutcracker prince were attacked by a flock of giant bats.

I guess anybody but a couple of innocents abroad from Utah would have known that the Rudolph Nureyev version of the Nutcracker always has giant bats in it. On the other hand, maybe the absence of giant bats in American Nutcrackers is one reason that the ballet is far more popular in North America than it has ever been in Europe.  In her book “Nutcracker Nation: How an Old World Ballet became a Christmas Tradition in the New World,” Jennifer Fisher (who clearly has a crush on the Nutcracker herself) describes how the Nutcracker evolved from an odd foreign import to a member of the community. She envisions the Nutcracker as a rags-to-riches immigrant, writing “…it’s the only classical ballet from the Old World which after a rocky start at home, made North America its primary residence.”

To understand why the Nutcracker is so much more frequently performed than other ballets, Fisher says, you have to consider it from an anthropological standpoint, just as a researcher might study dance forms of Ghana or Bali. She believes that as the Nutcracker gathered folk wisdom and grassroots experience, it developed such a strong association with the holiday season that it achieved status as a ritual much like birthdays or weddings. “And with rituals,” Fisher writes, “repetition doesn’t equal boredom—it equals power.”

I asked Jodie Fisher (no relation), the public relations manager at Ballet West, about the giant bats in other Nutcrackers. She shared my view, adding, “Doesn’t the mouse prince in that version have six heads or something? Seeing another version is disturbing.”  For most Salt Lakers, our Nutcracker is the one at Ballet West that evolved from the 1944 choreography by Willam F. Christensen.

Over the years, the audience and the ballet have formed a deep attachment. Jodie Fisher says, “It stays the same every year and that’s part of the draw. If I’m out in the lobby and I hear the crowd go wild, I know that it’s the Russian dance.” Clara, the Sugarplum Fairy and the dancing bear and doll are also favorites, as is Mother Buffoon who is getting a makeover this year so she’ll be more like she used to be. “When I was a kid,” says Jodie Fisher, “I loved how her skirt would swoop up and the kids would come out. The new costume harkens back to the old Mother Buffoon with a hoop skirt.  We have two men who work Mother Buffoon. One is underneath so she has legs and dances, and another is on the platform behind so she can mug at the audience. The costume has more movement and it’s less mechanical.”

Jodie Fisher says that as soon as the first snow of the year falls, people start thinking about Christmas and they call the box office for Nutcracker tickets. “It’s funny,” she says, “we get a little jaded when we have 25 performances. We all kind of groan when it’s Nutcracker time, but then we all get tickets and bring the little ones.”