On January 10 this year Marinda Coleman, a 14-year resident in the Canyon Rim neighborhood and a respected community member, received on her doorstep an Inspectors Report from Salt Lake County. It informed her that she was in violation of county ordinances 19.14.020 and 19.04.305. The report further stated that if she did not comply with the ordinance within 14 days, “civil penalties of $50 per day [would] be implemented.” Marinda’s heinous violation, according to the handwritten report, was “raising chickens in a residential zone.”
by Author 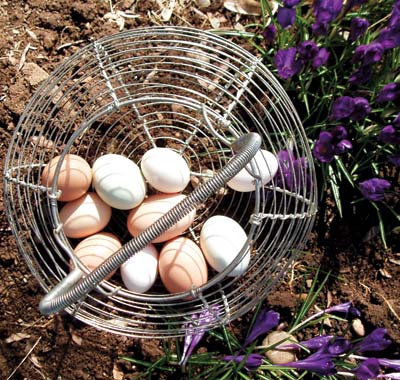 On January 10 this year Marinda Coleman, a 14-year resident in the Canyon Rim neighborhood and a respected community member, received on her doorstep an Inspectors Report from Salt Lake County. It informed her that she was in violation of county ordinances 19.14.020 and 19.04.305. The report further stated that if she did not comply with the ordinance within 14 days, “civil penalties of $50 per day [would] be implemented.” Marinda’s heinous violation, according to the handwritten report, was “raising chickens in a residential zone.”

Now, four months later, Marinda looks over the brown scratch of dirt where her chicken coops once stood. “I had my chickens for almost two years. I was trying to be more sustainable. Our morning meal came from the backyard. I walked out and I harvested the eggs every morning and they have taken that away.”

Mrs. Feathers, Little Chubbers and the nine other feathered companions that once lived in that tranquil little corner still roost in the two coops hand built by Marinda’s son Cedar and a family friend. Only now, they live with an acquaintance only half a mile away, but within the Salt Lake City limits where keeping “chickens…and other domestic fowl” is legal under certain strict legal guidelines. In fact, if she had lived in the city, her coops would have complied with every letter of the law. The coops were placed in the back corner of the yard, at least the regulatory 50 feet away from her house. They were immaculate and cleaned at least once a week, twice what is required by the city. She kept no roosters, only hens for eggs.

The sad separation of family and chickens all started with a neighbor who brought the county law to Marinda’s attention, and the presence of the chickens to the attention of county inspectors. Before then, Marinda never knew that she was in violation of any law. She only knew that half a dozen of her friends living in the city had no problems owning chickens. After a confrontation with her neighbor and the notice of pending civil penalties, Marinda began researching the ordinance. What she found said that chickens are allowed in the city.

“Then I found out that in the county, even though demographically we have more open space, you cannot,” she says. Further research showed that the ordinance was written nearly half a century ago, in 1959. “I believe that the thought behind it was trying to make the county more attractive to people, and less like rural land. So the ordinance is very old and very out of date.” 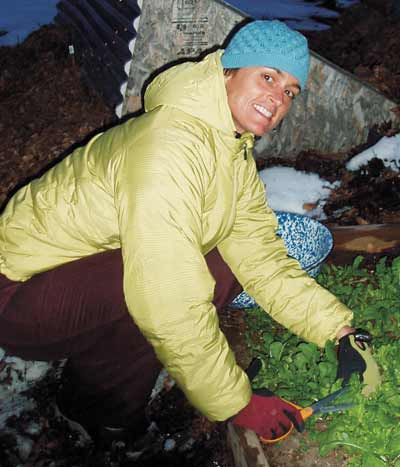 The ban, out of touch with the growing interest among Salt Lake residents, is also out of touch with a national trend bringing chickens back into the urban, family lifestyle. A quick Internet search gives a small idea of the rapidly growing popularity of urban chickens. Chicken advocate sites and do-it-yourself instruction sites appear from Madison, Wisconsin to Atlanta, Georgia. A site from Seattle called citychickens.com helps trepidatious first-time owners answer their questions about different breeds, what coops to build and even what size, color and nutrition make-up to expect from home-laid eggs.

For Miranda Coleman, an avid gardener by profession and by passion, keeping chickens just makes sense. She likes to remind chicken skeptics that the compost they buy at the store every spring and turn into their garden contains chicken feces. “When you get large-scale farms—chicken factories—and their shit is sitting there for days and days, those situations are toxic. But you take a small-scale, backyard [operation] where I turn the chicken droppings into compost, and it’s beautiful.”

After her initial research revealed opposing city and county ordinances regarding domestic fowl and animals, Marinda decided that she had to change the county ordinance. She expected the process to be a simple one, something that might even be fixed before her chicken’s eviction date. After all, Marinda says as she points to the Millcreek County Journal quoting County Mayor Corroon, sustainability is on everyone’s mind. In the County Mayor’s Report published in the February 14, 2008 edition of the Journal (Year 4, Issue 2), Mayor Peter Corroon writes, “I think the best way to honor [the pioneers’] sacrifices is to be more appreciative of the resources we have… Protecting the environment is one of the most important investments we can make. Our goal this year is to implement policies and programs to decrease total energy and water usage by 20% for 2009.” Emboldened by statements of environmental concern from the Mayor himself, Marinda called the Mayor’s office to see what she could do.

“When I got that first letter I called [the contact number on the report] and they told me that changing an ordinance is a pretty big deal.” But Marinda, not to be easily discouraged, began circulating a petition asking community members to support domestic urban chickens and the ordinance change. Within a few days, after knocking on all the doors in her neighborhood, she received over 70 signatures. Then on February 19, nine days after she received her first notice of violation, Marinda took those signatures to her local Canyon Rim council. At first given five minutes to present her case, she spoke for more than 20 minutes at the request of the council. “They were so interested in being more sustainable—they themselves had no idea that there was an ordinance that said you couldn’t have chickens—that they talked to me for 25 minutes because they had so many questions,” recalled Marinda.

At the end of the meeting Marinda asked if the council would support rewriting the county ordinance to match the city’s. Not only did the 13 council members of the Canyon Rim Citizens’ Association  unanimously vote to support the change, the Council’s Chair Amiee McConkie personally wrote a letter to Mayor Corroon. In the letter McConkie clearly stated that, “There is a national movement towards sustainable living for environmental and health reasons. Canyon Rim council members ask that you also support the suggested change, namely that County ordinances…be changed to coincide with Salt Lake City ordinance 8.08.010.”

Finally, with clear support from her own council, Marinda once again contacted the County Mayor’s office expecting to have successfully worked towards keeping her chickens and changing the law. But the necessary procedure turned out to be much larger than just convincing the members of her own local council. Unanimous support, she discovered, was needed from all of the councils in the entire county in order to rewrite the ordinance. “There are 11 communities within Salt Lake County. I have to have unanimous support from all of them to push [the change] forward and then [it has] to be voted on. So it is going to each council and then to each council’s planning commission.” 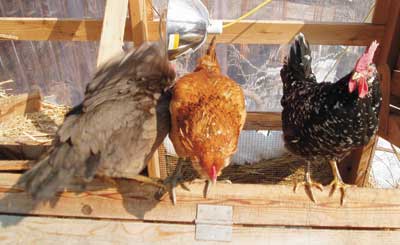 Even with support from people like Ms. McConkie and Councilman Crocket, who she says specifically showed great interest in her cause, the struggle is far from over. If any action is to succeed it will need more involvement, especially on the personal and community levels.

After our talk, Marinda takes me on a tour of her spectacular garden. It is an edible Eden that doubles as a meditation space filled with wind chimes and sculptures of the Buddha. Then we hop into her truck for a two-minute drive over to the house of her chickens’ current caretakers. We walk into the backyard and approach two a-frame coops standing almost five feet tall. The chickens begin to chatter as Marinda opens the hatches to free the chickens and clean out the water buckets. “This is Jamal and Roadie and Hailey,” she says, pointing to the chickens now running around the yard and kicking up leaves and dirt. “That is a Cochin breed,” she says indicating to a medium-sized chicken with feathers growing down her legs. “Doesn’t it look like she’s wearing pantaloons,” Marinda laughs. She points to another smaller chicken with white feathers tipped with black. “This is a Bantam, a Japanese Seabright.” As the chickens content themselves with pecking at the grass and leaves around the yard Marinda and I take a look in the coops. We find six fresh eggs, all different sizes and varying shades of brown and white, and still warm to the touch.

As I observe the chicken’s antics about the yard, and Marinda’s obvious pleasure at being once again in their presence, I think about the choice that she has made. Marinda could have just let the county take her chickens away. She did not have to raise her voice, and she did not have to fight so all Salt Lake Valley residents could own and keep urban chickens. But Marinda loves her chickens and she has a cause that she hopes others will take it on as well.

“I am very much into sustainability,” she says with conviction, “as much as I can be here in the city. I grow gardens year-round with vegetables, fruits and perennial medicinal and culinary herbs. I am being gentle on the earth… I have school kids come over and I give workshops on gardening. I have taught people how to grow things even in the winter. But one of my hang-ups with Salt Lake [County] is, are they actually doing something [for sustainability] or just talking about it?”

Urban Chickens—Wed. June 25, 7-8:30pm—Grateful Tomato Garden 800 South 600 E. Learn the basics of chicken care and how it can happen in the city, including SLC regulations, coops, breeds and basic urban chicken care.

This article was originally published on May 3, 2008.