Remington & Weasel: A Play of Politics and Love With Director Robin Wilks-Dunn and Playwright L.L. West

Chris Remington, a slick film professor, prowls the stage. The setting—a private university, in a makeshift theatre classroom. The audience is comprised of restless undergrad students. Watching. Waiting. “Oh. My. God. You are so fucking adorable . . . every stinkin’ one of you. Why, I could just suck you up with a turkey baster and squirt you into some secret, time-capsule, Tuff-Shed contraption. …And now it’s gone – poof – the cherry’s popped . . . and you’re all staring at me like I’m that crazy-ass, liberal, godless professor that your grandmother warned you about….”

So, Chris, our loose-cannon professor, is a man or women? Think about it. Think hard… Got it?

In the new play Remington & Weasel, by local playwright L.L. West, directed by Robin Wilks-Dunn, and presented by Pygmalion Productions, there are no gender pronouns assigned to many of the play’s characters—Chris included. In any production of R&W, the characters can be male or female or neither or both, and, most importantly, the script is written that way. If not an entirely new idea, it is still a captivating one. Wilks-Dunn says “[The play] is very clever in the way it is constructed. You really can do it in any [gender] combination, even though what you take away from it is very different.” In terms of this, the inaugural production, West says “Pygmalion’s mission statement is Giving artistic voice to women so [Chris and Alex] happen to be two women.” 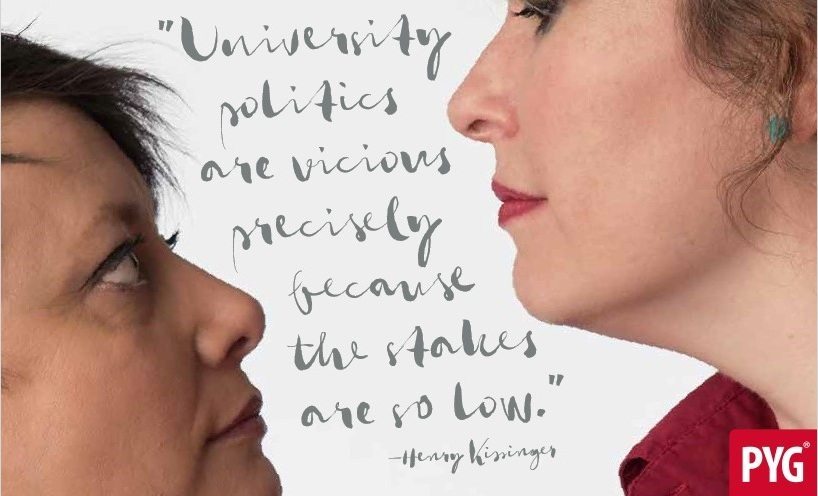 The story begins with charming, dangerous university professor Chris Remington, as played by Tamara Johnson Howell, teaching an introductory film class with a tongue-in-cheek style and a blatant disregard for authority. Former friend or former lover—we aren’t exactly sure—Alex Weedle, as played by Alexandra Harbold, is a fellow university professor with great respect for rules and the establishment. Weedle, AKA “Weasel,” is sent to monitor Chris’s erratic behavior, and pull in the reins if necessary. When a social media scandal takes hold at the university, threatening personal and professional lives, each character is left to decide when they stand. R&W follows Chris and Alex as their choices cause them to clash and, maybe, fall in love. It is a perfectly timed romantic comedy, with smart, emotional undertones—sap-free.

The idea for R&W came in part from West’s background as a university instructor dealing with internal politics and from a dinner he attended some five years ago. “I was at an Easter gathering with a same-sex couple, and it occurred to me that this gathering was as American and as [normal as anything],” says West, “…we were getting together with people and families that we love, and they just happened to be a same sex couple—big deal!” It was this normalcy that sparked West’s creative flame. “And I thought Is there a way I can write a romantic comedy and not bring in gender at all?” says West, “then I started watching the old [’30s and] ’40s comedies—Bringing up Baby (1938) and It Happened One Night (1934) and A Brief Encounter (1945)—and I thought These are really great love stories!” And with that West set out to write his own biting love story, set in modern times, and without gender. But R&W is not specifically about gender, “[I]t is just a play about people—how people fall in love and how they fight and how they disagree. That is at the core of [Remington & Weasel],” says West.

West and Wilks-Dunn have worked together countless time throughout the years. “I met [West] in Texas, [as] an undergrad and dance major,” says Wilkes-Dunn. With the dance and theatre departments working closely together, Wilks-Dunn often had an opportunity to watch West at work. “Watching [West] direct opened my eyes to what a director really does. So then I started to move from dance to theatre, and directing specifically.” Most recently, they collaborated on a production of West’s Weyward Sisters for Westminster’s Fringe Festival. With a history of stunning productions, R&W promises to be their best to date. Wilks-Dunn says “There is a universality in [the play]. [I]t’s a play for everyone.” Though “Maybe not kids,” adds West.

After R&W wraps, West will be directing a production of Shakespeare’s Titus Andronicus with an all-female cast for Pinnacle Theatre Company, opening in June; and Wilks-Dunn hopes to do some crafting.

Remington & Weasel runs from April 22-May 7. Thursdays-Saturdays at 7:30 p.m., and Sundays at 2 p.m., with an extra matinee at 2 p.m. on May 7, in the Rose Wagner Performing Arts Center, Black Box Theatre. Tickets are $20 on ArtSaltLake.org.

This article was originally published on April 22, 2016.