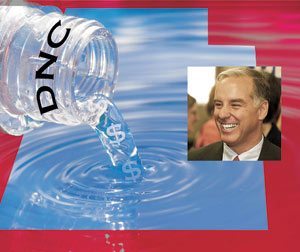 In September 2005, the Democratic National Committee (DNC) hired longtime political campaign worker, Jeff Bell, to be communications director for the Utah Democratic Party. Along with field managers Marcie West and Craig Axford, Bell was tasked with bolstering the party in Utah as part of Howard Dean’s 50-State Strategy. For local Democrats, it’s not a moment too soon.

The 50-State Strategy is a compelling idea: Create Democratic Party branches in every state in the country by hiring staff members and allocating funds to support them, whether it’s an election year or not. This will create infrastructure that local candidates can turn to for assistance when they run for office. In turn, the candidates benefiting from this support will win local races and move up the ladder to national races. It’s admittedly slow going, but Dean believes that’s the best way to (re)build a party.

Locally, Democrats haven’t been competitive in Utah since passage of the Equal Rights Amendment (ERA) stalled in the late 1970s. The ERA was the first of many wedge issues that Republicans have used to great effect in marginalizing Democrats in Utah. Democrats can regain relevance as a major political party by investing heavily in Howard Dean’s 50-State Strategy. And given their control of the Congress, they are in a unique position to do so.

It’s been a year since Dean’s plan was initiated, and the difference is dramatic in Utah. According to Bell, before Dean’s arrival, the DNC spent about $5,000 a year in Utah. Under Dean, spending has increased to almost $200,000 a year.

Turnout among the faithful has also increased drastically. Bell said that attendance at precinct meetings, the state party convention and Democratic primaries is up. “We’re seeing a more flexible state party that is able to better support the county parties all the way down into municipal races. So as far as participation and volunteer participation goes, the party is now able to do things it could never do before without incurring a gigantic staffing cost.”

The financial infusion also allowed the local party to field more candidates in 2006. “We’ve got candidates in counties this year where we haven’t seen candidates in 10, 12, 14, 16 years,” Bell said. “These are guys that have a shot in places where you would never ever think that a Democrat could walk down the street without getting lynched.” Bell believes that in time, Dean will be viewed as one of the most influential members of the Democratic Party because of his foresight in rebuilding the party.

Notwithstanding its apparent merits, the strategy was controversial when Dean proposed it. In an appearance on CNN, Democratic strategist Paul Begala derided Dean’s efforts to build the party in places like Utah as little better than nose picking. Democratic Congressional Campaign Committee chairman Rahm Emanuel of Illinois, and Democratic Senatorial Campaign Committee chairman Charles Schumer of New York feuded with Dean over how he allocated the party’s resources during the 2006 midterm elections.

The current orthodoxy embraced by much of the Democratic establishment is that the heartland and most of the South will vote Republican in national races anyway, so there is no point in wasting money and time campaigning there. Instead, resources are poured into a handful of key swing states where the outcome is still unclear. Al Gore and John Kerry subscribed to this theory and paid the consequences.

A random sampling of Democratic politicians in Utah shows widespread support for Dean and his vision. Almost everyone I spoke with endorsed it. (Congressman Jim Matheson’s spokesperson, Alyson Heyrend, wouldn’t express an opinion about the strategy, merely saying that Matheson didn’t rely on local party workers because he used his own campaign staff.)

When Janneke House ran for the Salt Lake City Council in 2005, she was one of the first candidates to receive help under Dean’s plan. Despite narrowly losing her race, House said Dean’s initiative would encourage people to run who might not otherwise do so because they lack resources. “In order to get people to run who don’t have a lot of money, but have the passion and the energy and the desire to make a difference and change the way things are done, they need a lot of help. And I think that comes from the Democratic Party.”

State Senator Patrice Arent, who is retiring from politics at the end of the year, is a big fan of Dean’s strategy even though she hasn’t personally benefited from it. “It’s a really important effort because for many years, politically, our national party has not focused on some states like Utah. This is going to make a difference.” During her career, Arent survived a slew of richly funded Republican challengers as well as a Republican redistricting effort that wiped the house district she represented off the map. However she still managed to win race after race, despite being a voice in the wilderness. “They have done everything they could to defeat me and yet I was able to win in an area where, at least when I was first elected, you didn’t see a lot of Democrats out there.”

As a strategy, State Senator Brent Goodfellow likes Dean’s idea so much that he is helping implement a 29-County Strategy for Utah, which is based on the national plan. Goodfellow said this local version resulted in 30% more Democratic candidates running in 2006 and a higher level of support for them. “We’ve actually had 50 different sessions throughout the state, training candidates, training staff and campaign workers and so forth. We’ve got more support on all kinds of projects from canvassing to literature drops to putting together brochures.”

There is still a long way to go. When I spoke with Bethanie Newby, Democratic candidate for the District 12 Senate seat in Utah County (she has since lost the race), she sounded irritated but defiant. She was grateful for the campaign training assistance she received but said she was not given any financial assistance from the state Democratic Party. She also said more than half her precinct chairs would not campaign with her or allow her to put up lawn signs in their yards. One of her most dependable precinct chairs was a 16-year-old high school student.

The Democrats in Utah are still, in Bell’s words, “a super-minority party.” So much so that the media ignores Bell. He speculates that it’s because he, a self-described “militant Democrat,” and his boss, Wayne Holland, Jr., are combative and like butting heads, unlike the turn-the-other-cheek Democrats the Utah press expected.

State Senator Scott McCoy, who heartily endorsed Dean’s strategy, agreed that for Democrats to regularly win elections they cannot ignore the heartland anymore. “I think that if we are to regain majorities and begin to govern, that we have to be prepared to do that everywhere, not just in certain states along the coasts and then write everything else off. That’s one of the reasons the country is so polarized right now.”

Rebuilding is a slow process. As Bell pointed out, beginning in the 1970s, the Republican Party went into what were then blue states and built their party by spending money on infrastructure. They sacrificed the quick gratification of funding candidates in tight races elsewhere for the long-term goal of creating facts on the ground. In 1994, their hard work paid off and they won control of Congress in a landslide.

In 2006, the Democrats didn’t win in a landslide nationwide and must deal with an electorate that resists radical change in any direction. And so the most difficult work is still ahead of them. As Howard Dean’s cousin and Salt Lake County Mayor Peter Corroon said about the 50-State Strategy, “You don’t win games hitting home runs. You win games with singles and double and triples and maybe a few home runs.”  u