When I was asked to write a play for Plan-B’s Free Elementary School Tour, I immediately turned to the closest elementary expert: my (now) 11-year-old son.

But Oliver is not a typical elementary-aged kid. He has the verbal comprehension skills of someone in college. As the child of a theatre professor, he has seen Stoppard’s “Arcadia” and Ibsen’s “Hedda Gabler”. He’s a sophisticated yet generous audience member. But when we’ve seen plays aimed at folks his age, he is often troubled by simplistic storylines and banal morals. Kids, he tells me, deal with real problems and these plays rarely offer an opportunity to think through a difficult situation or learn how to function better in real life.

Oliver also has learning and emotional disabilities that have challenged me as a parent: There is nothing more heartbreaking than not being able to give your child what he needs. In kindergarten, Oliver exasperated his teachers with incessant questions, impulse control issues, difficulty relating to other children, and disinterest in assigned work and procedures. We changed schools for first grade, but things got worse. The more his teacher criticized him, the more anxious he became about messing up, and the more he messed up. We changed schools for second and third grade: the pattern continued. Oliver began to talk about harming himself and wanting to die. So, outside of work and school, we hid in the house where it was safe.

As Oliver began fourth grade, extensive and complicated testing found that although he was profoundly gifted in some areas, his anxiety had become severe (especially in relation to school) and crossed over into depression. He was also diagnosed with minor ADHD and dysgraphia, all of which was hindering his “processing speed”—the ability to do rote and repetitive tasks—which tested at 7% of capability. Though he is not on the autism spectrum—he was diagnosed with generalized anxiety disorder—his symptoms mirror those who are, and require similar skills building and accommodation.

He was bored in school, depressed, lonely, bullied, and his teacher saw him as willfully defiant. We shared the test results and asked for accommodations, but his teacher became increasingly hostile, encouraging other children to isolate and belittle him. Although my husband and I both work full time, we began homeschooling him. This allowed us to give him an environment free from bullying, to select work that challenges him, to give him plenty of breaks to build his processing skills. Oliver feels safe. He no longer talks about hurting himself. And we no longer feel the need to hide. 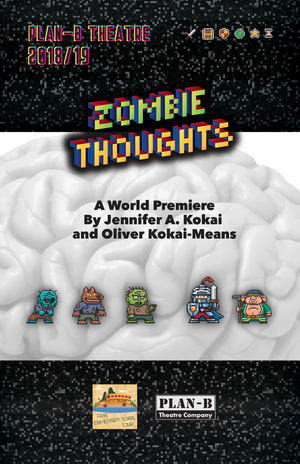 When I asked him to write a play with me, he decided he wanted to write about his experience with generalized anxiety disorder. So Zombie Thoughts is from his perspective, structured like a video game, teaching the calming techniques he learned in therapy he feels help him the most.

Also, it’s funny. Hard things are easier if you laugh.

Oliver’s voice is often silenced because of his disability. While I may have ensured the play is dramaturgically sound and structured and typed up the final dialogue, every idea, belief, character, and choice in the play is his.

I feel very, very lucky to have an opportunity to help his voice be heard.

My name is Oliver. I am a kid who likes soccer, who likes sports, and who likes and is really good at reading, and video games, and is not what some people would say normal is. Because I have anxiety.

My anxiety has caused problems for me because I don’t like being with people I don’t know, so first days are extra hard for me. It has also caused me problems with teachers who don’t understand, and with making friends.

Our play Zombie Thoughts is about a pig named Pig and a nine-year-old kid named Sam who has anxiety [I was nine when we started writing the play]. They are in a video game and they go on an adventure with different levels and try to beat them, but they have a hard time and they fail most of the time. They try and work on it and then they finally beat a level and then they have to fight The Machine. They technically beat The Machine but it doesn’t go away because you can’t beat anxiety. The audience gets to make a lot of choices in the play, like they’re the ones playing the video game. I identify with Sam.

I learned about Zombie Thoughts from my old therapist, Gennie. Every week I would see her and talk about stuff involving this topic and, based on what she knows, she would give me some ideas and I would try them and if they worked I would tell her and continue them and if they didn’t, I would tell her and we wouldn’t use them. In the play, Pig teaches Sam some of the things I’ve learned. You shouldn’t get mad at people. If someone suggests something that scares you, you shouldn’t get mad at them, you should say, “I don’t think that’s a very good idea.”

I refused to go on Space Mountain, a ride at Disney World, and threw a fit. But when I actually thought about it and went on it, I loved it and now it’s one of my favorite rides.

To write the play, my Mom and I had a lot of conversations about what could go in it. Then we decided to make it like a video game. There aren’t that many choose-your-own adventure plays, so I like that, and I really like video games. I gave my Mom the ideas and the characters and she wrote the words.

I like how the play goes right to the topic and doesn’t talk around it. It doesn’t have an end really. That’s what some people wanted, but it doesn’t really make sense because of what the play is trying to convey. It has kind of a happy ending, but it doesn’t use sweet words and avoid the topic it’s trying to talk about. Adults will talk about anxiety and things like that, but they’ll talk around what it is and they’ll use words that make it sound like this cute little thing and not a big issue that you should worry about.