For cosplayers, creating and wearing the costume of their hero is an act of holy devotion. I know this because, at a quick pace and for a fee, I am sometimes employed in making these costumes. Just ahead of Salt Lake’s first Comic Con last September, I found myself working on costumes for two young male clients who met one day in my studio.

Naturally, they began discussing the evolution of their characters’ artwork and their changes through time. They compared choosing particular costume details over others based on what I can only assume is an instinct towards orthodoxy in both cases.

My Space Ghost client, firmly fixed in the current DC Comics version, asked for costume details to match a recontextualization of the classic 1960s character. The Vegeta client (from Dragon Ball Z) opted for the “original” version of his character, whose armour includes attached faulds, instead of a later version which has none at all.

Fashions are the costumes we use in every day life. Our clothing—a flannel plaid as opposed to a starched and collared Armani—displays differences in lifestyles and identities. In any culture, our dress can determine our status as the preppy, the yuppie, the redneck. At times such visual distinctions can be as powerful as a title in the English monarchy or as dividing as the caste system of India.

Pilgrimages and Carnivale, as anthropologists and literary theorists have noted, create a special sense of “communitas” amongst those who travel, worship or celebrate together. During pilgrimage (whether Hindu, Christian, Muslim or otherwise), the social playing field is temporarily leveled. Farmers can enjoy eating and worshiping alongside nobility, socially taboo at other times of the year. 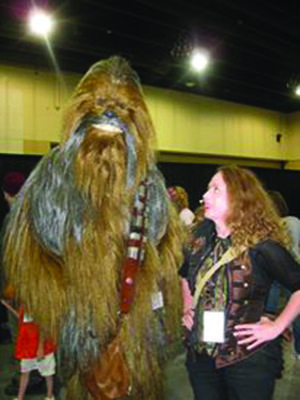 CHEWBACCA (Dartanian Richards, who built his own amazing costume), with author Jen McGrew.Medieval Carnivale was a time and place when the usual division of social classes was shoved aside. Inverted power relationships were temporarily celebrated. Roles were reversed. Peasants dressed up as kings, and kings would dress up as peasants in ribald play (and often bawdy humor).

Modern urban festivals like Comic Con, where people dress like anything other than who they are, strip away our ability to label and classify each other the way we do in normal society. Unless you personally know the mayor of Salt Lake City, his so­cial rank or class will be completely invisible to you if you encounter him costumed as Thor. Power relationships are inverted. Roles are reversed. But, strangely enough, in a context where costume is truly everything, instead of destroying difference and status Comic Con creates new social castes and defines new standards of cool and uncool.

At Comic Con’s human zoo, participant observers quickly learn to discern the well-articulated costume or cosplayer from those in the amateur ranks. Serious cosplayers, before making their own costume, wholly devote themselves to viewing and critiquing as many examples as possible in a sacred mission to educate their own eye. They scrutinize the broad spectrum of well-articulated to poorly-conceived-and-built costumes. They craft and assemble their own, either in an attempt to identically replicate original comic, anime or film artwork, or they may decide to mash it up.

The sacredness (or profanity) in terms of identical mimetic replication or derivation are paramount and fully considered. But, sometimes, people miss the mark. At the eleventh hour, in cases where time and planning simply fail, a costume gets thrown together. To make up for time and effort, sometimes youth and naked skin rule the day. 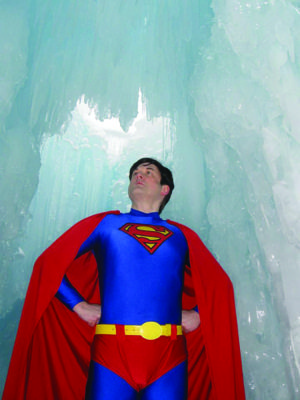 SUPERMAN: Eric Allan Hall photographed himself with the help of a tripod and timer.

And then there is the lowest caste, the noncommittal Comic Con attendee. Clad in shorts and t-shirt, this poor fellow stands out like a wide-eyed tourist. Like the requisite grumpy street-clothed guy who’s at every Halloween party you’ve ever been to, he just can’t seem to get with the program.

Beyond that, urban Comic Con attendees have far fewer caste restrictions than at any other point of human interaction, save except for during sacred pilgrimages. Newly made comic con friends can unite according to simple affinity and mutual interest. And, just maybe, a Thor-clad mayor of Salt Lake City will, once the day is over, invite a monster-truck-loving construction worker from West Valley City to a dinner party.

Jennifer McGrew is the Cosplay Competition organizer for ComicCon. She is the owner of McGrew Studios and “a recovering academic.” http://McGrewStudios.com 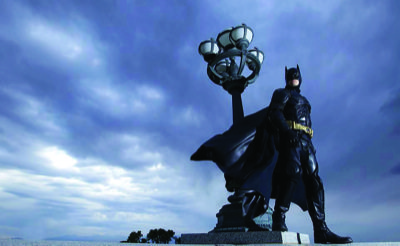