Ode to the hen’s egg

Spring recipes and memories of cooking with mom

Imagine some curious ancient human 70,000 years ago picking up the egg of a wild junglefowl, breaking it open, then poking a finger into the alluring golden yolk. The rich taste spurs her into eating it, and the way she feels afterward (satisfied!) makes her look for more of these treats.

In Smithsonian Magazine’s “How the Chicken Conquered the World,” Jerry Adler and Andrew Lawler surmise that red and gray Southeast Asian junglefowl were domesticated 10,000 years ago, and then carried west from a trade center in the Indus Valley. The now ubiquitous chicken and its nutritious eggs rapidly transversed the globe.

Our habit of breaking wishbones came from the ancient Roman belief that chickens could predict the future. Ancient Egyptians realized the value of chicken eggs, developing and guarding incubation centers. Certain breeds of birds can lay eggs all year round with supplemental light in winter, although sadly, that has been exploited by factory farming, which also employs cruelly crowded conditions for the birds—and less tasty eggs. 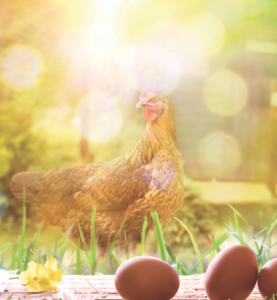 I eat hen’s eggs almost every day, cooked plain and in sweet and savory foods. For friends on a keto diet, I developed an egg dish with cheese, zucchini and scallions that I have made several times, because its eggy-cheesy richness is utterly delicious.

It would be lovely to have the freshest eggs from your (or your neighbor’s) chickens, or at least organic free range, because factory farmed eggs sometimes taste fishy. This is because the rapeseed or soymeal fed to the chickens transforms into the compound triethyla­mine in the chicken’s gut.

Chickens, like humans, are omnivores. Free range chickens that eat a more varied diet of bugs, grubs, worms and seeds produce eggs that are, to my taste, more delicious. If there’s no rooster around, the hen’s eggs are unfertilized, and she will lay them according to the light and warmth of her surroundings. In the winter, hens naturally lay fewer eggs.

Eggs are also the basis of my favorite pastries. I was already in my thirties, with a serious baking habit, when I realized that the two parts of an egg should be treated separately. This knowledge changed the way I cook and bake. Yolks contain fat (and essential fatty acids and vitamins—their lutein is especially good for the eyes) and flavor as well as protein. The fat in each yolk contains about 200 mg of cholesterol, a substance proven to contribute to heart disease, most recently in a study in the UK medical journal The Lancet. But cholesterol consumption is only one of many factors in disease and longevity, so we might best navigate the sea of information by recalling the ancient adage, moderation in all things. After I switched to using only yolks in challah and brioche, the breads were moister and more delicious—not to mention naturally more yellow. Try adding an extra yolk to a brownie or cookie recipe, and reduce the fat by a teaspoon (or not).

Freezing extra yolks is a good way to store them: Mix each yolk with ¼ tsp. sugar (a trick I learned from baker Rose Levy Beranbaum) and accumulate them in an airtight container. When needed, defrost at room temperature. Yolks make custards and puddings unctuous (think crème brulee).

In the early 1980s I worked at a chic restaurant in Washington, D.C., where we served a lemon mousse made with uncooked eggs. Since then, the U.S. has become more cautious about the possibility of salmonella illness associated with raw eggs, so chicken breeders test for the bacteria, and consumers are instructed to cook eggs to 160 degrees to kill any potential bacteria.

Egg whites are mostly protein and water. I remember reading that Martha Stewart dieted on eight egg whites a day. While the yolks emulsify, the whites are a binding and drying agent. Egg whites freeze and defrost perfectly, without adding any sugar. With leftover egg whites, I make crisp crackers and delicate pizzelle. Or savory quinoa or millet cakes— made with egg whites and cooked grain, baked (350 degrees, 15-20 min.) until crisp on the outside and creamy inside.

The basis of angel and chiffon cakes, and meringues, which bake and stay splendidly crisp in dry Utah air, is, of course, egg whites. Cream of tartar (potassium bitartrate, a byproduct of winemaking) is an essential stabilizing ingredient for the alkaline egg whites; use a pinch per egg white when whipping into a meringue. A liquid acid like lemon juice would water them out. Try making meringues with maple sugar and pecans or dry lime powder (sold as TruLime) or chipped, unsweetened chocolate. Beaten egg whites—imagine a cloud dissolving in your mouth—are the epitome of delicacy.

One favorite recipe of mine uses both the yolk and white but treats them separately. When I was a child my father traveled a lot, so my German mother and I would eat foods that he disliked but we loved: chocolate pudding, puffy pancake (aka an omelet soufflé). While we ate, we’d watch movies from the ’40s and ’50s, like Mildred Pierce. I didn’t learn how to cook from my mother—that I owe to Julia Child and the Galloping Gourmet alongside the habits of reading cookbooks and fooling around in the kitchen—but I did learn to appreciate simplicity and good ingredients.

My mother’s omelet soufflé is a terrific breakfast (or dinner) for two, or a dessert for four. To serve two people generously, separate five eggs. This is easiest while they are cold: Hit them lightly on the counter until cracked and use your fingers to pry open, creating two even half shells. Tipping the egg back and forth between the half shells, let the white slowly drop out into a bowl while leaving the isolated yolk in the shell. Place the yolks in a small bowl, and the whites in a larger bowl or electric mixer bowl. If you get a trace of yolk in the white, lift it out with a piece of shell because any fat will prevent the whites from whipping. Note that they whip better at room temperature.

Whisk the yolks with two tablespoons of milk (nondairy is OK), then whisk in two tablespoons of flour. I use chestnut flour for added flavor, but any fine-grained flour—all-purpose, corn but not cornmeal, or teff flour, an ancient grain originating in Ethiopia and Eritrea—will work. When using chestnut flour, I add a dash of vanilla extract and a pinch of stevia powder (corn flour tastes better with orange essential oil and a pinch of stevia). You can also use sugar, but the omelet is more likely to burn. Grain stabilizes the soufflé as well as gives it more substance. Beat the whites with three-fourths teaspoon of cream of tartar and a half teaspoon salt (both stabilizers) until stiff. You should be able to turn the bowl upside down without the egg whites sliding out. Fold the yolk mixture together with about one third of the whites until evenly blended, then gently fold in the rest of the whites.

Heat two teaspoons of clarified butter or ghee in a nine- or 10-inch nonstick pan and pour in the omelet batter, spreading evenly. Cook over low heat for about seven minutes, or until the sides of the omelet seem firm, and when you slide a spatula under it, the bottom is golden brown.

Moxie, originally a native American word, was the name for a late 19th century medicine supposed to build nerve, then the trademarked name of a bitter beverage. One builds nerve by realizing that the consequences for failure are smaller than the rewards for risk. In cooking, this is easy because while it’s not pleasant to throw away food or eat one’s failures, no life or limb is at risk.

Once the omelet soufflé is turned, cook the other side on low heat for about five minutes, or until lifting one side with a spatula reveals that it too is golden brown. With a serrated knife, cut it in half and serve immediately just as it is with fruit preserves or powdered sugar. The omelet should be about two inches high, golden brown all over and firm but moist on the inside. Eat it quickly before it deflates.

It’s often said that baking is a science while cooking is an art. The omelet soufflé is an amalgam of baking and cooking, and a paean to the wonder of the hen’s egg. I can’t think of another sweet good that offers so much nutrition, pleasing texture and flavor for so few calories (200-300, depending on the fruit preserves).

Today, chickens have the reputation of being stupid, or worse, mere commodities that produce meat and eggs. Yet some folk tales honor the hen—and the henwife—for mystical powers and hidden knowledge. The hen’s egg should also not be underestimated. It contains within it a world of nutrition and myriad possibilities for better cooking and baking.

Natasha Saje is a professor of English Literature at Westminster College and the author of two books of poetry. Her essay “Learning to Love Real Food” appeared in the April 2018 CATALYST.