The Novice’s Grimoire: The Symbolism of Baphomet

Baphomet, or the Goat of Mendes, is a symbol that throughout history has played a mysterious and often misunderstood role. And though symbols and their meanings alter with time and society, it would seem Baphomet’s roots are not something society has held fast to, instead allowing it to become a catch-all image for any line of witchcraft, occult, and esoteric thought.

One of the first mentions of Baphomet can be traced back to an eleventh century letter penned by a crusader named Anselm of Ribemont, who describes a Templar ritual to Baphomet and God held before a battle. In more recent times The Church of Satan, created by Anton LeVay in 1966, has adopted the image of Baphomet as their insignia, calling it the “Sigil of Baphomet,” and using it to suggest that logic—specifically Luciferian logic—stand as an individual’s guiding “moral” force. Yet, at its core, Baphomet is not a deity meant to be worshipped, not is it a steadfast representation of Luciferian logic, but instead something bigger, more widely encompassing.

Eliphas Levi has given us the most famous depiction of Baphomet. In an 1857 illustration from his book “Dogme et Rituel de la Haute Magie,” Levi sketches Baphomet out in solemn detail and poise. Levi then explains the image and it’s detailed, symbolic meaning, “The goat on the frontispiece carries the sign of the pentagram on the forehead, with one point at the top, a symbol of light, his two hands forming the sign of Hermeticism (as above, so below), the one pointing up to the white moon of Chesed, the other pointing down to the black one of Geburah. This sign expresses the perfect harmony of mercy with justice. His one arm is female, the other male like the ones of the androgyn of Khunrath, the attributes of which we had to unite with those of our goat because he is one and the same symbol. The flame of intelligence shining between his horns is the magic light of the universal balance, the image of the soul elevated above matter, as the flame, whilst being tied to matter, shines above it. The ugly beast’s head expresses the horror of the sinner, whose materially acting, solely responsible part has to bear the punishment exclusively; because the soul is insensitive according to its nature and can only suffer when it materializes. The rod standing instead of genitals symbolizes eternal life, the body covered with scales the water, the semi-circle above it the atmosphere, the feathers following above the volatile. Humanity is represented by the two breasts and the androgyn arms of this sphinx of the occult sciences.”

Baphomet is a symbol that is meant to represent the sum total of all things in the universe, acting both as parallel and paradox, showing the observer and student alike that concepts like “good” and “evil” exist only through perspective, and that all creatures, things, and ideas have a dark and light side within. Through Levi’s description we find that Baphomet is a symbolic representation of balance and necessity, in all things.

In looking at Baphomet, there is a striking resemblance to other horned deities like Rome’s Bacchus, Greece’s Pan, Egypt’s Hathor, Celtic polytheism’s Cerennunos; we may suggest that this is not accidental. As Christianity swept the world, allocating all other religious figures and ideals into the occult or “other,” it is likely that Baphomet rose up as a composite image/deity of the other horned gods, otherwise forgotten or mistreated by the ruling religion’s mighty hand. Whether Christianity then appropriated Baphomet as a representation of the devil, or the devil and Baphomet coexisted with some success, is unclear. But the equation happened nonetheless. Baphomet now stands as a complex image, seemingly representing all levels of the occult; and perhaps this is fitting for a god that represents all and the balance of all. Baphomet stands as a literal, figurative, and meta-composite symbol, more interesting with each glance.

Certainly this isn’t everything about Baphomet—this isn’t even the tip of the iceberg—but there are more NGs to come, and there is always time to revisit this interesting character. Novices, it has been my pleasure spending this time with you. Until next week, stay studious.

Z. Smith is a cookie connoisseur, moonlight meanderer, and aesthete at large. His work has appeared in 13 Experiments, Folio, Stone Soup Review, SLUG Magazine, Salt Lake City Weekly, and CATALYST Magazine. He earned his BA in English from The University of Utah and currently writes from a room with many plants.

The Complete Book of Spells, Ceremonies & Magic by Migene González-Wippler

This post made possible by a generous contribution from: 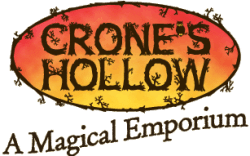 This article was originally published on August 25, 2016.