Notes from the Trail 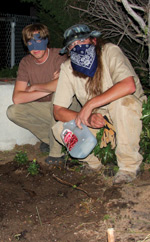 Oregon Country "Fair" should be renamed "Excellent."
by Steve Bhaerman 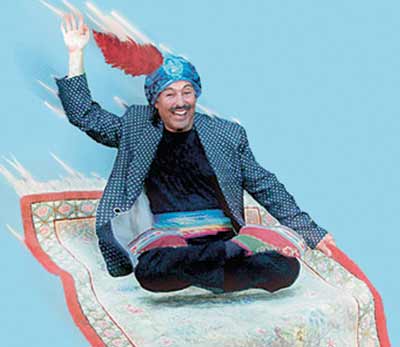 For someone who travels as much as I do, I don’t like to travel that much. My favorite vacation spot these days is my own backyard, with easy access to a nearby multi-acre state park to hike around in. And with two writing projects cooking, I was a bit reluctant to disturb my routine last month to drive up to the Oregon Country Fair in Eugene.

I had been hearing about this event for years, and this year—thanks to my compadre Bruce Lipton and Country Fair veteran and Egyptologist Nicki Scully—the Swami and I were invited to speak. As Kurt Vonnegut said in his novel “Cat’s Cradle,” unusual travel arrangements are “dance lessons from God.” Well, this time the Creator outdid even our wildest expectations. Arthur Murray, eat your heart out.

A heaven of a party

For those who have never experienced it, the Oregon Country Fair is nothing less than a small city that gets built for one week, then dismantled every year. Some 18,000 people work and camp at the fair, while 40,000 visitors a day stream through what can best be described as a peace, love, creativity and beauty theme park. These folks have been doing the fair for 40 years, and over that period of time they’ve learned how to throw a heaven of a party.

As pro bono presenters, my wife Trudy and I were treated like royalty. (No, that doesn’t mean we were taken to Dairy Queen for breakfast and Burger King for dinner.) We were assigned what I playfully called our “native guide,” Gretchen, whose assignment was to “make sure we were happy” and that we didn’t get lost to or from our presentation. We enjoyed great food, great entertainment and great company…and while “not working,” I made connections I couldn’t have made in ordinary work life.

Three of many connections stand out.

Even before the fair began, I found myself talking with retired Army Colonel Ann Wright, who courageously spoke out and resigned her commission in protest of the Iraq War. One point she made in her presentation deserves emphasis here. During the sanctions against Iraq during the 1990s, half a million Iraqi children died because of our economic strangulation of that country. When asked if these deaths were “worth it,” Madeleine Albright, the Secretary of State under Bill Clinton, replied, “Yes.”

Now I would like to pause and reflect on this for two reasons. First, as we stand on the threshold of electing a Democratic president in the hopes he will be different from the Republicans, let us remember that Madeleine Albright was and is a Democrat. Even if you believe as I do that an Obama nation will be an improvement over the abomination we have today, please remember that empire is empire, whether under the abuser Republicans or the enabler Democrats. Nothing will change in this regard unless and until we the people demand it and stand up for it.

The other point is this. That which they do to the least of us, they are willing to do to most of us. In other words, if you or I are somehow caught between the empire and its goals, our lives are worth about as much as an Iraqi child’s.

We Americans used to be able to imagine that we were served well by the American empire. Consequently, we were willing to go along with the “don’t ask, don’t tell policy”—we promise not to ask our government what they are doing to “protect” us, and they promise not to tell us. However, after nearly eight years of Bush and Cheney (who’ve done more to awaken humankind than any dozen spiritual teachers), we must realize America has been rear-ended by its own karma.

As we’ve watched Democrat and Republican alike declare that our Constitutional protections no longer apply, we are coming to look more and more like those third-world people whose plight we have conveniently overlooked for the past two generations. Maybe it’s time we awakened to the inconvenienter truth that America has been turned into a banana republic thanks to Banana Republicans and their go-along Democrat cohorts.

If you happen to be one of those “spiritual folks” put off by political discussions, let me assure you that this conversation is bigger than politics. It challenges our very spiritual and moral foundations. If you feel compelled to point to “those radical Muslims” and the danger they present, I would suggest that we don’t defeat this threat by emulating it. The notion that our doing evil is justified because we are “the good guys” is moral midgetry of the first order, something all of us should have outgrown by now.

Let’s put it this way. Exactly what did those Iraqi children do to deserve the death penalty? How about the Iraqi civilians—hundreds of thousands of them? Does anyone get charged with those “souls batted in,” or does the Official Scorer call it an “error”? I hate to make a comparison between   Nazi Germany and Not-See America, but seriously…what’s the real difference between genocide and collateral genocide? The Swami tells us, “the truth shall upset you free,” so I highly recommend buying and reading former L.A. prosecutor Vincent Bugliosi’s latest book “The Prosecution of George W. Bush for Murder.” Bugliosi was the prosecutor who convicted the Manson family and wrote a book about it, “Helter Skelter.” This book is way, way more important. Buy it, read it, discuss it. Our goal should be to make it number one on the New York Times bestseller list. Thanks to a mass media that can only be described as a “brainwashing machine stuck on spin,” we’ve become collectively dumbed down and numbed up. It’s now official. Bush, Cheney, the neocons, the neolibs, the media aren’t fooling anyone anymore. From now on, people who buy their hokum are fooling themselves.

And now for the real good news

In more heartening news, I made two more contacts of note. First, I met and had a long conversation with Kevin Danaher, director of Global Exchange and co-producer of the highly-successful Green Festival. I had been wanting to meet Kevin for several years, and the Country Fair setting was perfect for an uninterrupted conversation. He is unusual in that he is a political activist and visionary entrepreneur focused on finding solutions and putting them into practice.

In the course of our conversation, Kevin told me I had to hear Ari Lesser, a young spoken word artist who uses rap, sharp comedy and poignant imagery to awaken, inspire and activate young people. When I heard Lesser, I was blown away by his artistry, wit and insight. I later found out that he is the son of Raymond Lesser, publisher of Funny Times, a paper that sometimes publishes the Swami. Like his dad, Ari is funny and political, and while Ray has already made his mark, Ari has a chance to be…well, the greater of two Lessers.

And that brings me to the most heartening thing of all about the Oregon Country Fair—the amazing bridge being built between the late ’60s/early ’70s generation and the young people now in their teens and twenties who have the energy and vision to take the ideas of “peace, love and justice” to the next sophisticated and functional level.

The young people who enthusiastically appreciated the Swami’s performance (my overflow audience was mostly under 30) have already moved past the archaic distinctions of “left” and “right” and are ready to come “front and center” to create a world of “sustainable abundance.” I was moved beyond words by their spiritual and political maturity, and their willingness to learn and build. The young people I met may be a minority in their age group, but they will be the minority that makes a difference.

Steve Bhaerman is also known as Swami Beyondananda. Visit them online at www.wakeuplaughing.com.