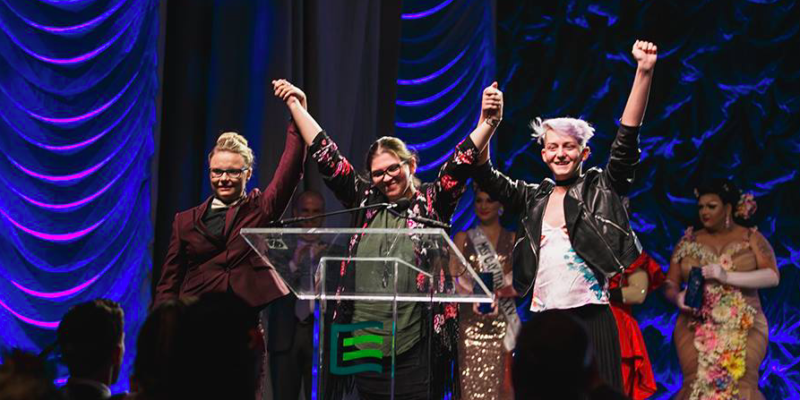 SB 196, AKA, “No Promo Homo” Law was repealed after Equality Utah filed a lawsuit against the State Board of Education. This law prohibited the discussion of homosexuality in public schools under all curriculum. What this meant was, no mentioning of transgender people in health class or sex ed or, no mentioning of queers who marched for civil rights in history class. It meant that in public schools, gay, lesbian, bi-sexual, transgender and queer people are not to be mentioned or promoted positively in any class curriculum. You can imagine how this might be damaging to students who identify under the LGBTQ umbrella – especially when they tend to also feel they don’t fit into the  homogeneity of Utah public schools.

Three brave Utah students, Katy Smith-Gish, Josh Greer and Kaiden Turkel, stood up for thousands of LGBTQ Utah students as plaintiffs in Equality Utah’s lawsuit with a strong team behind them including the National Center for Lesbian Rights, the international law firm, Ropes and Grey. The law was repealed unanimously, making Utah the second state to repeal this kind of legislature after California. In September, the State Board of Education filed a letter that reflected how the board “desires each student in Utah public schools to receive a high quality education free from all manner of discrimination, which can take the form of bullying, based on religion, race, ethnicity, gender, sexual orientation, and gender identity.” This is the first of many promises we hope to see made in the future to protect our young students in school.

In Utah, most LGBT protection acts are in place, however, in public schools, students with a different gender expression, those who may identify as transgender or non-binary, are still not protected from bullying or discrimination in public schools. Utah was one of the last states to protect it’s gay and lesbian students from bullying and harassment in public schools. I am proud and hopeful that this bold step in our red state will start a trend that can push back against any more anti-LGBT legislation that comes out of the current White House Administration.

To Katy, Josh and Kaiden: thanks to your courage and strength, students of Utah public schools no longer have to feel the shame and discrimination of their existence being considered “taboo.” I offer my gratitude and my praise. (Photo Credit: Alixann Loosle Photography. Allies Dinner 2017: RevolutionQ).

To Senator Adams and the entire Utah State Legislature: I hope you continue to let compassion for young people be the guiding reason for civil law debate in our state.