This hardy cousin is our go-to green for all seasons.
by Letty Flatt

They’re cousins, spinach and chard, both leafy and green and practically interchangeable in recipes. They are early crops, showing up in your garden and at the Farmer’s Market in June. The pair can endure light frost, spinach even more so. But spinach can’t handle intense heat—it will go to seed and become bitter, while the sweeter and sturdier chard just keeps on providing greens into summer.

Nutritionists say spinach and chard, chock full of vitamins, are nutrient dense, meaning you get lots of nutrients without a lot of calories. The word “Florentine” in a recipe or restaurant menu indicates spinach as an ingredient, and is a reference to Catherine de’ Medici’s birthplace, Florence, Italy. Culinary history says that the Queen of France loved spinach so much she insisted it be served at every meal.

My sisters and I preferred frozen peas and iceberg lettuce salads, although our mother would on occasion serve spinach from a frozen box. Our grandmother served mustard greens, no doubt boiled and without seasoning, and I was well into adulthood before I lost the negative connotations of that strongly pungent leafy cruciferous cousin to broccoli. Thank goodness my palate today loves and even craves all of these green leafy nutrient-dense veggies and that I’ve learned hundreds of ways to cook them.

Chard is often called Swiss chard, although no one can figure out exactly why Swiss, since it originated in Greece and Italy.

Although spinach has been on the American home cook’s radar for much longer, nowadays chard can be found in upscale markets and on menus of locavore-style restaurants. The most common is ruby chard, with bright green leaves and red ribs/stems. Green chard has white ribs; and rainbow chard, sold as “bright lights” in seed packets, has midribs of yellow/gold, pink, violet, orange, red and white. Last summer, Ranui Gardens CSA grew a Blonde de Lyon chard with lighter green, more tender leaves and less rib and vein.

Spinach also has different cultivated varietals, savoy and smooth-leaf. The smooth-leafed variety is popular because it saves cooks from the chore of washing the dirt and gritty sand that easily collects in spinach’s leaves and stems. Savoy spinach has very crinkled leaves and is usually more frost tolerant and bolt resistant.

Know that spinach makes the dirty dozen list (#5) of foods high in pesticide residues, so organic is a good choice. (By the way, even though it is called spinach, New Zealand spinach is not botanically related to true spinach.)

When I buy leafy green produce, including chard, kale and collards, or when I cut the leaves from beets, I trim the bottom half inch from the rib/stem, like one might with fresh flowers. I place the stems in a jar of water, cover the leaves with a plastic bag and store in the refrigerator. I am always amazed how fresh the greens stay when I don’t get around to using them right away.

If you have a go-to recipe that calls for spinach, try it with chard. Unlike most greens whose stems become stringy and unpalatable when cooked, chard stems tenderize with cooking. This part of chard also contains vitamins and phyto­nutrients. Chop the stems into ¼-inch lengths. Sauté them with onion or garlic before adding the leaves.

You might like to bring spinach and chard into lasagne and other casseroles. Try adding these greens to a dish of farm eggs, like frittata, omelets, or quiche, a custard baked in crust. Or turn them into my personal favorite, tortillas filled with chard or spinach and topped with a spicy sauce—enchiladas.

Oil mist, from purchased cooking spray, or from a refillable pump oil sprayer

Wash the chard well. Trim the leaves away from the ribs. Cut the ribs in ¼-inch pieces and set aside, and then chop the leaves in 1-inch strips.

Pre-heat oven to 350° F. Lightly coat a 9 x 13-inch baking dish with oil and spread about ¼ cup of the enchilada sauce around the oiled dish. Place tortillas on a baking sheet, 4 to 6 to a pan, depending on the size of your pan. Lightly mist both sides of the tortillas with cooking spray. Heat in the oven 3 to 5 minutes, until the tortillas are soft and pliable, no more.

Fill the tortillas in assembly line fashion, filling all the warmed ones on the pan before rolling them and placing them in the baking dish. With your fingers, spread a heaping tablespoon of the chard filling down the middle of each tortilla. Follow with a sprinkling of the green onions and olives, and finally with about a tablespoon of the cheese. Roll the tortillas around the filling and place them seam side down in the dish. Mist, heat and fill the rest of the tortillas repeating the first assembly line. (You can cover the pan at this point and refrigerate overnight..)

Ladle the enchilada sauce over the rolled tortillas, making a point to cover the ends first and spreading lightly over the middle. You want to be sparing vs. generous with the sauce, even if there are thumbnail patches of tortillas showing. Sprinkle with cheese or olives, for optional eye appeal. Bake until heated through, about 20 minutes. 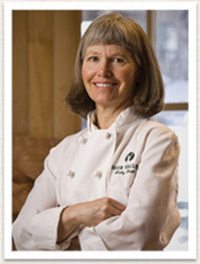 CATALYST welcomes Letty Flatt to our family of writers. Letty earned a degree from the French Culinary Institute in New York and attended Ecole-Lenôtre in Plaisir-Grignon in France. Letty has been following the vegetarian way of eating for 35 years. She is the executive pastry chef at Deer Valley Resort and the author of Chocolate Snowball.