My summer of screech owls: the things we see when there’s time to sit still

The owls came to me this summer. I think it’s because of Covid—whether they have always come and I only noticed them because I’ve been home so much or because, as some friends of a more mystical bent suggest, they have chosen me to bring good tidings.

I’ve heard the screech owls during previous summers as they called to each other from my catalpa tree, the next door neighbor’s roof, and the hawthorn tree down the street. Their unmistakable call is nothing like screeching. It’s more like chuckling. Perhaps I should track down the people at whatever Avian Bird Naming Society is out there to suggest they officially change the name to Chuckling owls.

This summer, with lockdowns, quarantines and assaults on democracy, they have come with such regularity, they are like my backyard family. I spotted the first pair early one evening on the power wires near the back of the house. They watched me and I watched them as I cooed to them in a sing-song voice, “Hell-lo baby owls. Hel-lo.”

A few nights later, feeling pandemic and political fatigue, I could make them out on the iron pergola at the end of the sidewalk by the ivy-covered wooden fence. I saw one, then another on a dead branch of the linden tree, then four more. Some swooped down, one right in front of me to land on a bar holding the wooden swing. It was like that owl had come to say, “It’s okay. Don’t despair. We’re here to bring you comfort and joy.”

They chuckled and called to each other from their backyard perches, while I stood in awe and listened to their chorus. When I walked to the back door to go inside, I spotted two of them on the wires by the house. A shimmering blue dragonfly bumped into the window like it was trying to come inside with me. There was something magical about that night. Aren’t dragonflies supposed to be good luck, too?

I posted pictures of my little feathered visitors. Messages poured in. They’re there to give you comfort. They’re better entertainment than Netflix. They bring good luck. They’re watching over you. They’re a gift. They’ll bring you clarity. They’re protecting you. They’re good omens. They bring hope and joy. They’ve come to take your mind off the Horribles. Are you accepting visitors? Can we have dirty martinis at a watch party? I’d be willing to be pecked and scratched to high heaven to pet one.

One friend painted an owl on a rock and left it in my mailbox. Another left a children’s book, The Curious Little Owl, on my porch. Another sent cards from tarot decks attesting to the magical powers of owls. 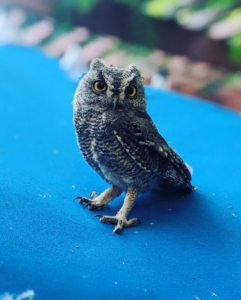 I’ll take the magic for 500, Alex. Maybe the owls did choose me. Maybe I was an Owl Whisperer, as one friend suggested. It can’t be that they like the rodent population hiding under my deck. No, they chose me. They were my gift during Covid, a magical, magnificent, life-affirming distraction.

My feathered friends started appearing during the day. One tucked into the crook of the rainspout while my boyfriend, Steven, and I watched it from the front porch. The day my bees swarmed and left me (what is it they were trying to tell me, I wonder), I walked down the steps into the backyard and saw what looked like a little stuffed toy sitting on top of my empty beehive. It was a sweet little screech owl. Maybe it was telling me not to worry about the bees. I’d get new bees. (I did).

Watching the owls became a passtime for me and my six-year-old niece, Sophia, who lives at my house part time. We go out to the linden trees to look for them. Sophia often spots them first, their grey feathers blending in perfectly with branches and limbs. The littlest owl hides in the ivy on the side fence, another fledgling on a branch in the corner of the ivy. One on the pergola. Two on a linden branch above them—all in broad daylight. They don’t move. They just watch us as we sing, “Hel-lo, baby owls. Hel-lo.” Don’t owls sleep in the day and hunt at night? These owls are lounging in the middle of the day, peacefully watching us, closing one eye, then the other before dozing off.

Sophia and I started scouring the ground looking for their feathers, which we make into earrings.

When my Steven was tested for Covid and had to quarantine while waiting for results, four owls showed up in the lindens. Two were moving their heads in circles, either dancing for me or ready to peck my eyes out. One larger owl higher up in the tree was moving its beak, like it was trying to talk. Or was it issuing a warning? I decided it was trying to tell me something. I called Steven.

“You’re going to be fine,” I reassured him. ‘I’m sure your test will come back negative. That’s what the owl was trying to tell me. Don’t worry.”

The next day his test came back negative. Chalk up another one for the owls. 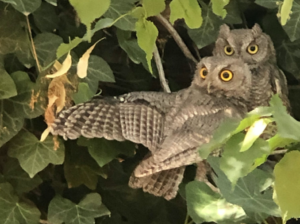 They show up so often now that I can tell them apart. I’ve given them names. Brenda Sue for the little one who likes to sit in the ivy but ventures onto the top of the table umbrella on the deck and onto the tubing that sprays a mist to keep us cool. Metcalf, in honor of Jeff Metcalf who passed away this summer, the wise owl who sits hidden in the leaves of the linden, watching over everyone below. Basil for the skittish one who landed on the antique birdcage and quickly flew away when I got too close. The Bobbsey Twins, for the two grey owls who sit next to each other and move their heads in circles at dusk. Yoda, for the smaller one who is more white than the others and bears an uncanny resemblance to the Star Wars character. And Angelica, for the one who likes to sit on the granite angel and on the plaster angel that tops my Altar of Broken Dreams—where I put shards of colorful plates, cups and saucers I’ve broken.

When one friend inquired how I knew Brenda Sue was female, I told her it was simple. She wore lipstick. I have no idea if the owls are male or female. How do you tell the sex of an owl? They just get the names I give them.

Every morning, I scan the ivy and lindens for my little owl friends. One day when I couldn’t find them I worried they had abandoned me, but they had just moved to the pear tree, closer to the deck.

One night over dinner, Steven and I watched them in the pear tree. When we went inside as the sun was setting, I watched from the window as they swooped onto the deck. I hurried out to sing my “Hel-lo” to Brenda Sue and her friend on the tubing. To Basil atop the bird cage, head cocked, perhaps contemplating cage life. To Metcalf above him on a wooden beam. To Yoda on the other side of the lattice, sitting on the handles of an old bicycle half hidden in the lace vine, perhaps fantasizing about learning to ride that thing.

I know it sounds crazy, but I think they wanted to have a little fun with me that night. Basil swooped low through the sunflowers that form an arch over the sidewalk. I followed him. He perched on the pergola, looked at me then swooped to the ivy. Angelica swooped to the top of the granite angel, then crowned the angel on my Altar of Broken Dreams, before heading to the pear tree. And sweet little Brenda Sue? She wasn’t leaving her perch closer to the house. If one of them lands on my head, it will be her. At least, I think it’s a her.

They’ve started coming so close that I’m waiting for them to nest in my hair. I bought them a house this week, cleared the ivy on a section of the wooden fence and secured their new cedar home with deck screws. Hopefully, they’ll move in. I’d like them to stay. These days, we need all the magic we can get—even if, truth be told, they are here for the mice.

Activist and writer Mary Dickson worked in public television for years before taking early retirement to write and enjoy life. When she’s not hosting Contact, which she continues to do, she tends to her bees, communes with the owls, and tries to avoid Covid.

This article was originally published on September 2, 2020.