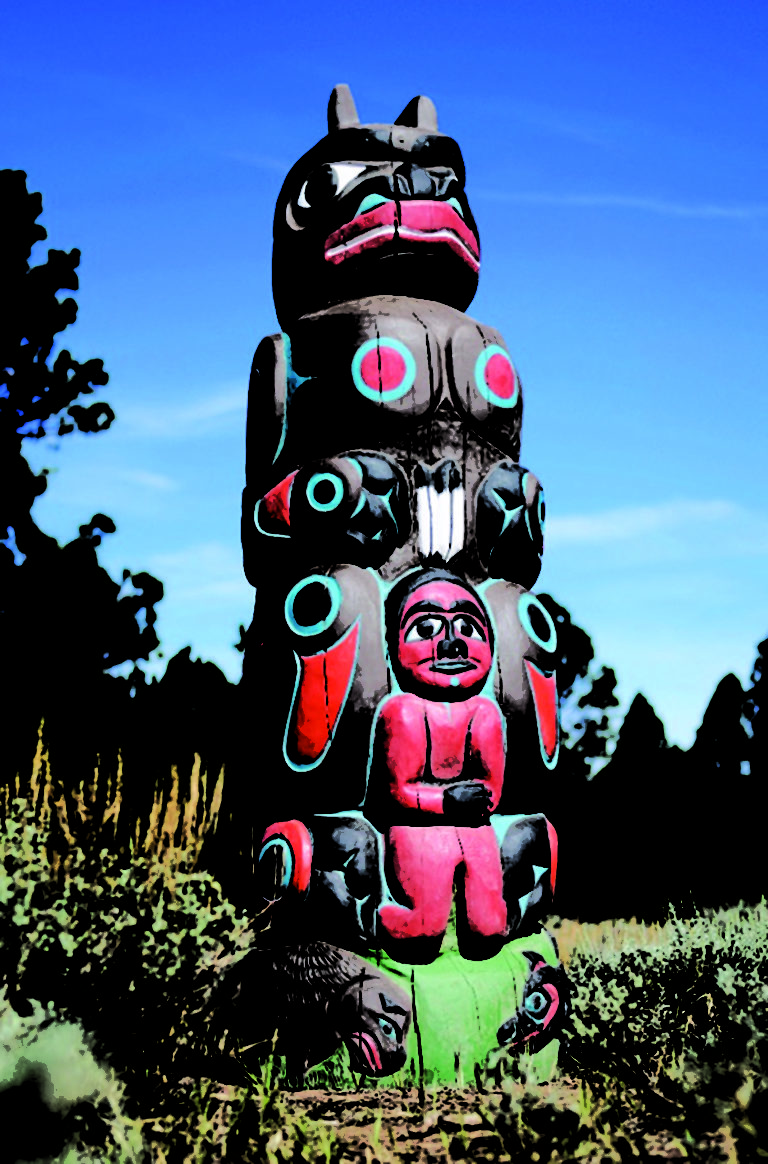 In  July the Bears Ears Inter-Tribal Coalition received the gift of a bear totem pole from the Lummi Nation in the Pacific Northwest. The nine-foot-tall totem was made by master carver Jewell James and other artists from House of Tears Carvers. James is a long-time champion of salmon preservation and indigenous fishing rights. In 2013, he organized a totem pole journey, carrying a symbolic totem 1,700 miles along coal train rail lines to protest a proposed coal terminal near Bellingham, Washington that threatened tribal fisheries. Since then, a totem pole journey has been held every year to protect sacred lands and waters.

The tribes eventually won their fight against the coal port. In 2016 the U.S. Army Corps of Engineers rejected the permit in order to protect indigenous treaty rights (a decision the developer called “inconceivable”).  After President Trump shrank Bears Ears National Monument, James says that bears were seen in Lummi Village for the first time in many years and they became the spirit guides for a new bear totem.

The bear totem visited the Urban Indian Center in Salt Lake City on July 19, and was set up in Bears Ears Meadow to serve as a guardian during the 2018 Summer Bears Ears Inter-Tribal Gathering from July 20-22. It is currently standing in the main foyer of the Southern Ute Museum in Ignacio, Colorado where people can touch it to say prayers and receive a blessing. In April, the indigenous group Utah Diné Bikéyah appealed to the United Nations Human Rights Council calling looting and grave-robbing at Bears Ears an ongoing human rights violation. They asked that under the U.N. Declaration on the Rights of Indigenous Peoples the Trump administration should wait until the legality of the monument reduction has been decided in court before producing a hasty management plan. (In 2007 the United States voted against adopting the Declaration, but President Obama endorsed it in 2010).

Public comments are needed on two draft management plans for the reduced boundaries of Bears Ears and Grand Staircase-Escalante National Monuments. The rushed planning is part of a Trump administration strategy to formalize smaller boundaries in order to prevent pending lawsuits from restoring the original boundaries. (As a second line of attack, Utah congressman Chris Stewart (R-Ut-2) has introduced a bill to replace Grand Staircase-Escalante National Monument with a small National Park.)

Concerned citizens should be aware that the Trump administration is not only re-writing plans to manage the re-named units of smaller national monuments; they are also making plans to lease, develop and sell public lands that the 2017 Trump proclamation eliminated from National Monument status: “Bears Ears National Monument Draft Resource Plan (reduced size:  Shash Jaa and Indian Creek Units). Comments due by November 15, 2018. ePlanning: https://goo.gl/uLrEae

Alternative A, the “no Action” alternative” would continue the existing management plan within the  original 1996 boundaries of Grand Staircase-Escalante National Monument. Trump administration-preferred Alternative D conserves the least land area and is least restrictive to energy and mineral development.  It promotes timber harvest and grazing, and adds new road construction. 700,000 acres that were protected by the National Monument would be made available for coal mining, oil and gas drilling and other development.

Interior Secretary Ryan Zinke was caught trying to sell 1,600 acres of land cut from Grand Staircase-Escalante National Monument to none other than state representative Mike Noel (R-Utah district 73). A Draft Resource Management Plan for the reduced monument (see above) identified public lands in Johnson Canyon to be sold for private development. The parcels happen to be adjacent to land owned by Noel, which also happens to be located along the proposed Lake Powell Pipeline route.

Utah Rivers Council has requested a formal investigation into possible conflicts of interest. Noel denies that he wants to buy the land, but has been trying to prevent pipeline-related documents from becoming public. Zinke claims that he didn’t know the Johnson Canyon sale was in the plan even though the 2017 Trump boundaries were specifically drawn around Noel’s property. BLM Deputy Director David Bernhardt took blame for “failure to capture this inconsistency” and withdrew the proposed land sale.

Utah Senator Mike Lee (R) has introduced a bill  offensively named the PURE Act (it stands for of Protect Utah’s Rural Economy), a bill to prevent future protection of Utah’s federal public lands. The bill does not, in fact, address Utah’s rural economy, but rather requires that establishing or expanding National Monuments in Utah would require both an Act of Congress and approval from the Utah Legislature.

San Juan County government vigorously opposed monument designation, in part because they claimed that it would harm economic development (except that it will apparently also draw visitors and attract businesses to the area). The Utah Office of Tourism is likewise promoting travel to both “Bears Ears National Monument” and “Grand Staircase-Escalante National Monument” even though they were both dismantled by President Trump in 2017.

Utah has already experienced more than 800 wildfires this summer, most of them caused by human activity. Smoke from wildfires rendered summer air along the Wasatch Front nearly unbreathable (45 red air days and counting in Salt Lake County).

Unfortunately, Utah’s catastrophic wildfires have become yet another excuse for a Republican agenda of environmental deregulation. During an interview with FOX 13 news, Herbert repeated talking points taken straight from right-wing media, blaming the severity of fires on federal environmental policies. In fact, healthy forests are more resilient to wildfires, and conditions caused by climate change are making the fire season longer.