Man on a mission: from Nigeria to SLC, Utah, beekeeper Adesina Daniel Oduntan shares his passion for bees and beekeeping

Adesina Daniel Oduntan is a beekeeper, author, entomologist, a German-trained queen bee breeder and an apitherapist. He is the founder and CEO of Bee-Craft Consult LLC in Salt Lake City but has over 27 years of experience in beekeeping, teaching and studying in his home country, Nigeria, and abroad in Europe.

Adesina Daniel Oduntan is a dreamer, a man with ideas and a determination to leave a lasting legacy in the world of beekeeping and beyond. Here is his story.

“Nobody taught beekeeping in the country before, because everyone was afraid of bees,” Daniel says. Intrigued, he became a dedicated student beekeeper.

After breezing through most of the available local material on beekeeping, Daniel sought out beekeeping information from the United States. He learned about two family beekeeping businesses: Dadant and Sons—now in its seventh generation; and the A.I. Roots Company—in its fifth generation. “I said, ‘Wow, I want to leave a legacy like this.’”

Daniel read and absorbed everything he could find related to beekeeping. Soon, he stumbled across apitherapy (how to use venom and other bee products to treat ailments). He joined an online training course, based in Romania, conducted by Dr. Ştefan Stângaciu, MD, a renowned figure in the field.

Impressed by Daniel’s passion and eagerness to learn, Dr. Ştefan Stângaciu invited him to travel to Europe for the German Apitherapy Society Conference. There, Dr. Stângaciu introduced him to a man Daniel would come to refer to as his trainer, his godsend, his beekeeping everything: Arno Bruder.

He traveled to Germany at least once a year to work for Bruder and connect with other trainers. During this time he earned an associate degree in queen bee breeding in Landsberg.

Throughout the 10 years between finishing his master’s and training abroad, Daniel continued work on his main project back home in Africa, beekeeping education. He’d seen many young people graduate from school and still struggle to find a job. “I began to think. And I’m praying to God: Give me an idea. God gave me the situation: Give more to people. Teach them. I decided to focus on training our youth. I wanted them to have a new kind of mentality. To be self-reliant. To foster an entrepreneurial spirit.”

He organized equipment, bees and educational supplies and single handedly sponsored and established vocational beekeeping clubs at all of the high schools in his state. The following year, the program grew, expanding into other states.

Things were taking off. Daniel says he could feel he was making a name for himself and creating important change for others.

In 2014, Daniel came to the U.S. for the first time to attend a beekeeping conference in Pennsylvania.

“At the conference,” he recalls, “[my staff and I] were the only Black people out of 400 or 500 participants. It gave us a lot of recognition. And in fact, at that conference, A.I. Roots Company came to me and invited me to partner with them to supply their wax.”

After returning to Africa, it was clear to Daniel that the business partnership would not obtain the Nigerian government’s approval.  Still, he says, the recognition from one of the very companies which inspired his beekeeping journey was, to him, a proud achievement and milestone.

In 2015, Daniel immigrated to the U.S., living in Des Moines, Iowa before relocating to Utah where his family joined him.

Life was different here. “Never in my life had I worked for anyone,” Daniel says, recalling his struggles working his first U.S. job at Amazon.

With the support of his family, he resigned from Amazon in pursuit of establishing his own beekeeping training and consultation business.

Daniel applied to various local loan programs. “I didn’t have a credit score record; I didn’t have a guarantor. All I had to show was the work I’d done and my dedication.” Utah Microloan and the International Rescue Center granted him loans totaling $12,000 and he set off to create Bee-Craft Consult.

Daniel says he constantly adapts and tries new things. Besides selling his products—honey, honeycomb, lip balm, propolis, candles and pom­ade—Bee-Craft Consult teaches in-person and online beekeeping courses for all levels, and Daniel personally consults and manages bees for others in the Salt Lake area.

Recently, he has put extra effort into his online academy as the demand for virtual trainings has increased due to the Coronavirus pandemic.

Daniel often works with other new Americans and refugees as his students through connections made from the International Rescue Center’s loan.

“For refugees, this kind of business  can help make extra money. It doesn’t stop someone from working another job if they need to. It is the bees who make the honey.”

He adds, “It doesn’t matter if you are a lady, a man, old or young, all you need is a bit of help and knowledge. This is a passion for me: to help as many people as possible.”

It hasn’t been all easy. Daniel says Bee-Craft Consult needs as much help through government or private partnerships as it can get, but he’ll never stop working to make sure his business is successful and creates a lasting legacy. 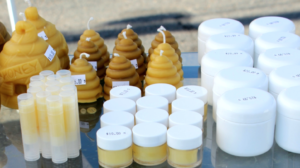 Daniel envisions a return to his home continent to help foster a stronger beekeeping economy and help people become self-reliant and competitive through developing their beekeeping skills. In doing so, he confronts two main issues: One, serious corruption problems make it difficult to establish a lasting business. Two, the nature and perception of the African “killer bee” has proved difficult to overcome.

African honeybees, native to most of the central and southern parts of Africa, are known to exhibit more aggressive behavior than Western bees. Daniel says that though many people in Africa might be interested in keeping bees as a business, fear of injury or death steers them away.

Also, most people in Africa eat only artificial honey—a problem, Daniel points out, from an apitherapy perspective because real honey has so much healing and medicinal potential.

With training and awareness, Daniel hopes to alter the image of African bees as killer bees and help increase beekeeping in the region.

“All the people need is the knowledge,” he repeats. Most of the time when he works with bees, he doesn’t wear a bee suit. “It isn’t magic. It is a skill.”

With his experience and drive, Daniel believes he can develop a plan to help tame Africa’s bees, discovering new ways to build their trust of humans and people’s trust in them.

The road ahead is daunting, says Daniel. His educational and business projects in Nigeria have not sustained themselves in his absence.

Daniel loves Utah: for its friendly people, its beautiful landscape, but mostly for the safety and security it provides his family.

In his culture back home in Nigeria, the practice of female genital mutilation is still pervasive. It was this pressure that led his family to flee.

“One time they kidnapped my daughters to threaten the ritual of genital mutilation. Now that we are here, we never think about that. It gives my mind rest to know that this is a safe place for us.”

Still, Daniel himself plans on returning to Nigeria one day alone.

“I am an African man. My mind is in Africa. I need to fulfill my dream back home.” His plans include bringing investors from America to Africa to explore untapped resources to boost both economies.

I asked Daniel what one thing he wished everyone would realize about bees even if they, themselves, are not beekeepers.

This article was originally published on August 2, 2020.