Picture yourself around a fire with friends. The stars shine above as the sounds of your voices mingle with the crickets, the light flickers across faces of those you hold dear. What happens in these settings? We tell stories.

Human beings have used time by the fire in a unique way for millennia. In Embers of Society: Firelight Talk among the Ju/’hoansi Bushmen, University of Utah Professor of Anthropology Polly Weissner analyzed group conversations in hunter-gatherer communities in southern Africa, comparing the content of daytime and evening talk. She found a pattern that resonates across time and culture: Evening hours by the fire were largely used for storytelling.

“After dinner and dark,” Weissner writes, “…the focus of conversation changed radically as economic concerns and social gripes were put aside. At this time 81% of lengthy conversations involving many people were devoted to stories; these stories were largely about known people and amusing, exciting, or endearing escapades.”

Though the fire may be far from our busy modern lives, the institution of evening stories lives on in other venues, be it the dinner table, the local bar, or our children’s rooms at bedtime. The key in Wiessner’s statement is these are stories of known people, not celestial figures or fantastical heroes. The cast of characters we explore and highlight at night are the people of our own family and community. Evening stories give us a chance to reinterpret the daily grind. What happens in the course of the day can become insight, lesson, mystery, or even legend by the time it’s shared past sundown. 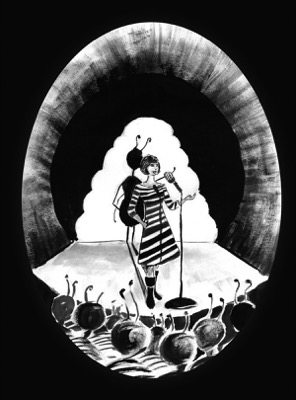 So even if most of us don’t have a fire to go to, there are opportunities to hear and tell true stories, our own stories. One of the most notable is The Moth, a national network hosting storytelling evenings on a wide range of themes. I became aware of The Moth on the radio, and was amazed at how it filled a need I hadn’t even recognized, to hear stories of true life told with the respect and support of an audience.

After moving to New York, I started to participate in these events. Having been in the audience countless times and performed on a number of occasions, I can say the experience is always deeply moving. As I bring the listeners into my territory, I see it in a new light. Even the most mundane contours of my life become landmarks in my map of the world. Tears that fell bitterly in the past now enrich the ground of the story, tensions become transformations, and losses are filled in with communal affirmation.

This beautiful, ancient form of community building belongs in Salt Lake City. Hence The Bee: True Stories from the Hive, a series of storytelling evenings that will begin December 18 at Urban Lounge. I will be cohosting with my sister, ceremonialist and truth teller Giuliana Serena. Our hope is nothing less than that The Bee becomes a local institution.

The format is simple: 10 storytellers have five minutes each to share a true story that relates to the theme of the night. For our first show, it’s “Tradition,” both because we hope The Bee becomes a tradition and because Utah is brimming with stories of traditions, some continuous and others transformed, many upheld and plenty transgressed. Anyone wanting to participate puts their name in a hat, and 10 names get pulled out over the course of the night. All are welcome to join. The spotlight will serve as our flickering, embracing fire.

In listening to others’ stories we get to walk down streets we may never see ourselves, eat meals with ingredients we’ve never tasted, have our hearts broken by perfect strangers. Like a dam suddenly broken, in just five minutes of listening, we are released from the confines of our own experience. Our awareness pours out onto a new, broader plane. Then that teller leaves the stage, someone else comes up, and a wholly new voyage begins.

A Conversation with Francesca

Can you give an example of a story you delivered for The Moth?

On a night when the theme was “De­ception,” I talked about the years I lived in Alexandria, Egypt. Alexandria is no longer the cosmopolitan pearl that it was a century ago, but the legacy of that time appeared in the host of different nationalities I was always being mistaken for: Italian, Greek, Armenian, Lebanese, Pales­tinian—the whole Mediterranean was projected on my face. After a while, whenever some one said “Are you….?” I just said “Yes.” To all of them. Beyond wishful thinking, it was a practice of wishful living as I took on all the lost identities of a fading culture. Shar­ing that story let me travel back to that incredible chapter in my life, bring the audience into this unique and mysterious place on the planet, and extend a treasured community a little longer into the future.

What makes a good storyteller?

A good storyteller is someone who takes the audience into their experience: someone who lets us feel the feelings they had, see what they saw, hear what they heard. When they get embarrassed, you get embarrassed, when they wait for that phone to ring, you’re the one with butterflies. The best storytellers take you from the beginning, middle and end of a tale with emotional transparency and faith in value of their own, real personality.

Any tips on how a potential participant might prepare?

When you hear the theme, “Tradition,” what comes to mind? Follow that thread and see where it gets you. It’s got to have an arc: know where it starts, know where it wanders, and definitely know how it ends. The best way to prepare is to tell your story aloud at least three or four times, either to yourself or to a willing listener, with a timer handy. Keep it to five minutes. Personality goes a long way, but plot counts.

What is the etiquette?

The Bee is both wholly uncensored and open to the public (21+). Storytellers decide for themselves what part of their lives they want to shed light on, and which details they want to include. Many storytellers find that the stage is actually a freeing place: There’s something about allowing your life to be welcomed as art that makes your blemishes beautiful. We will be recording the show, so consider both the privileges and caveats of posterity.

This article was originally published on November 29, 2014.