In the cockpit-like control room at the KRCL studio, Brian Kelm, surrounded by buttons, levers, microphones, screens, dials and wavering needles, is hard at work. It’s Monday night and the host of Red, White & Blues has five minutes left before he goes live on air. KRCL, 90.9FM, is a community-supported radio station airing local and syndicated public affairs programming and music. “We used to have just a cassette player and a reel-to-reel tape player,” Kelm says. He’s been a KRCL community DJ for 36 years, likely making him the longest-lasting unpaid blues programming host in the nation.

Over the course of almost four decades he’s seen plenty of changes. “It’s all the computers we use now that are the big difference,” he says. “When I started, the training was literally five or 10 minutes, now you have to sit through days of training.”

Kelm got his start in radio soon after moving to Utah from the Twin Cities (St. Paul and Minneapolis). A University of Utah freshman studying journalism and mass communications at the time, Kelm was in class on only his second day when a professor mentioned the launch of a new station called KRCL. An avid blues fan, he wondered if there might be a place for him at the new station. 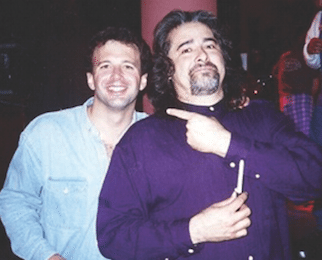 Kelm with Coco Montoya at the Zephyr 2/10/95 (Catch Coco at the State Room June 30th)It may seem odd to have a blues fan from Minnesota, but Kelm insists that, while everyone thinks of Chicago first when they think of the blues, Minnesota, the home of Prince and Bob Dylan, was also a hotspot for funk and blues in the ’70s and ’80s. “I was already listening to blues at maybe 10 years old, flipping through my older brother’s albums at home,” recalls Kelm. “I didn’t know the men on the covers, but their sound resonated with me.”

Later, when Kelm started listening to rock and roll, he was surprised to find the same names from his brother’s albums in the song credits for bands like the Rolling Stones and Led Zeppelin.

“British rock bands of that time were discovering black American music,” he says, “and selling it back to us, teaching us about our own culture.” As a teenager, hooked on the blues, Kelm and his buddies began sneaking into a downtown club at night, a place owned by a friend’s uncle, where they listened to their idols, Muddy Waters, B.B. King and others, play live.

In the spring of 1980, a few months after the launch of KRCL, Kelm decided to pay the station a visit. “I told them I liked blues music,” he says, “and they asked what I was doing the next evening.”

Kelm was given the slot for the last program of the night, during which he’d spend hours spinning his favorite records till he decided to shut the station down. “Sometimes I’d keep the music going till two in the morning,” recalls Kelm. “Sometimes, if I had a test or something to study for, I’d quit at 11.” At that time the station was located above Cosmic Aeroplane Books on First South [see CATALYST,. July 2014]. “Unable to afford a car, I crammed blues LPs and cassettes in my U of U book bag and rode my bike to the station for the first year or two—rain, sleet or snow.”

The show was dubbed “The Great Basin Blues” program. In 1990, it morphed into the “Red White and Blues” and Truman Wold took the reins for a summer when Kelm visited Alaska. 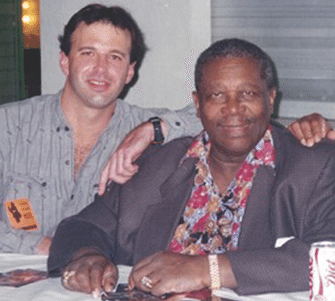 With BB King at Abravanel Hall 10/29/95These days, of course, KRCL runs a much tighter ship. After quickly finishing the fast food burrito he’d grabbed on the way to the studio and pulling out his first music set from the shelves of cds, Kelm watches the giant clock on the wall for the numbers to hit 8:00:00 p.m. and he pushes play on the first track, Chicago blues man Mike Wheeler. Like an octopus, he spins from the turntables, three CD players, the control board in front of him, and four computer screens to his right, rapidly entering details about the track being played for mandatory radio reporting requirements.

It’s easy to see that Kelm’s two jobs, his night gig as a DJ and his day job as a disabilities and worker’s compensation attorney, have a similar pace. “They can both be frantic and stressful,” says Kelm. “DJing can be fun, but I plan my vacations around this show. Some days I’d really rather be where you are, just sitting back and enjoying this music, but I do it because I believe that it’s got to be done and there haven’t been other people asking to take it over.”

Even outside of the studio, Kelm’s passion and advocacy for the blues continues. As the president of the Utah Blues Society, Kelm heads the group’s annual fundraiser, the Utah Blues Festival. Only in its second year, the blues fest is already attracting headlining entertainment. This year’s line-up includes blues guitarists Toronzo Cannon, Bernard Allison (the son of blues legend Luther Allison) and Ronny Baker Brooks (son of legend Lonnie Brooks).

“The initial incarnation of the Utah Blues Society was actually back in 1994 by Julie Turner and Michael Shelby,” says Kelm. The two produced and mailed out the High Desert Blues newsletter—a more challenging feat than today’s easily compiled and disseminated internet newsletters. “The blues music scene seemed in its heyday with choice national and local blues nearly every night of the week, particularly between the Zephyr Club and the Dead Goat Saloon.” Eventually, however, the society faded away and those clubs closed.

In early 2013, blues musician Tony Holiday had the idea of starting the Utah Blues Society. In the process, he found out about its former existence and connected with some of the “old timers” of the Utah blues scene, including Kelm, who got on board to help resurrect the group. “I’d been thinking of it for years, but life and time constraints always got in the way. Finding out that others were excited about it was enough of a catalyst for me to take the ball and run with it, which I did.” 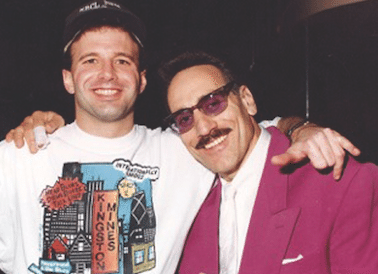 Rick Estrin of Rick Estrin & the Nightcats and Brian at the Zephyr 1994During his time at the helm of Salt Lake’s only blues radio show, Brian Kelm suspects he’s listened to over 100,000 blues tracks and made handwritten notes on every track on every blues album in the extensive KRCL library noting the song’s rhythm (“rompin’ biting rollickin’ shuffle”) or sound (“vintage raw”). He knows exactly what to play at a mo­ment’s notice. His music preference leans towards the old blues classics but, he says, “I try to focus on living blues to help the touring musicians today.” And, as is the case with KRCL’s best DJs, he always has something to teach his listeners.

As a track off the new album House Party at Big Jon’s by Big Jon Atkinson and Bob Corritore winds down, Kelm reaches for the microphone. “You may have thought that last piece was from the 1950s,” Kelm begins, “but this album came out just this year, recorded on analog technology so it has that nice vintage sound. This album is definitely making it onto my top 20 for 2016.” Then, with a touch of the board, Kelm is off to the next song.

This article was originally published on June 3, 2016.