Hunting with a Purpose

Several times a week during the summer and early autumn, after she spends an hour or so in the garden, my wife asks me to go get the camera. She carefully positions a bounty of delicious vegetables in her basket —cucumbers, zucchini, pole beans, peppers, kale, lettuce—and she poses proudly, the gardener with the fruit of her yearlong toils. She gardens, supplying us with copious fruits and vegetables that last us many months. It’s my duty to supply us with organic, free-range, sustainably harvested, naturally raised meat of the absolute highest quality, enough to last us a full year.

Several times a week during the summer and early autumn, after she spends an hour or so in the garden, my wife asks me to go get the camera. She carefully positions a bounty of delicious vegetables in her basket —cucumbers, zucchini, pole beans, peppers, kale, lettuce—and she poses proudly, the gardener with the fruit of her yearlong toils.

She possesses a thumb greener than I’ve ever been behind the ears, so I leave the garden in my wife’s charge. Meanwhile, I pursue my duty to supply the family larder on lands far from our urban homestead. She gardens, supplying us with copious fruits and vegetables that last us many months. It’s my duty to supply us with organic, free-range, sustainably harvested, naturally raised meat of the absolute highest quality, enough to last us a full year.

And whereas my wife finds deep and profound connection with the natural world as she cultivates and harvests her well-tended plants, I find mine afield while hunting amazing animals in some of the most astonishingly beautiful and unexplored places in Utah.

I take my role in the hunter-gardener dichotomy of our family very seriously. Of course, we wouldn’t starve if I failed to harvest the elk meat we enjoy so much—and it should be noted that, anachronistic as it might sound, there remain people in America whose subsistence in the lean winter months depends on wild game—but the source of our meat is of the utmost importance to us.

The ills of factory farming and the high carbon footprint of meat production have been well documented. As considerate members of the web of life, we make great efforts to insure the meat we eat is sourced in a manner consistent with our rigorous consumption ethos. That means avoiding conventionally produced meat whenever ethically possible—i.e. we try to be considerate dinner guests, especially when traveling abroad.

That being said, we do very much enjoy eating meat. I love hamburgers, steaks, roasts, jerky, meaty chili and stews, and especially shank simmered in a complex broth until all the connecting tissues melt into a succulent jelly. So we choose to procure our meat in what, to our minds, is the most ethical and holistic manner available: We hunt for it.

Just as kids are headed back to school after the summer break, I head out into Utah’s mountains and forests looking for elk. Weighing upwards of 700 pounds, a full grown bull elk yields about 300 pounds of ultra-lean, organic meat. There’s no doubt about where the meat came from or how it was raised: Nature is at once the supreme range and rancher. And provided I fulfill the very serious obligation of landing a killing shot with my bow or rifle, the animal will suffer as little as possible before expiring. It’s our hope that every animal we consume (we also raise and harvest chickens and ducks) lives a very good life with one bad day. If only we could all say the same for our own lives. 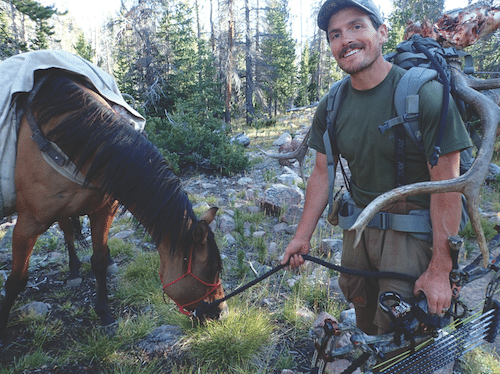 Hunting is likely one of the oldest rites in human history, and the connections it provides me and many other hunters are profound. Humans have hunted for almost two million years, and we modern hunters bear the important burden of honoring and carrying on that tradition.

Above all, that means behaving ethically. An ethical hunter possesses a deep knowledge of his, or of course her, chosen quarry and its ecosystem. He has strong woodsman skills and is expert with his weapon of choice. He is exceedingly fit, attentive and strategic. He is cognizant of his responsibilities as an apex predator and the role of hunting in shaping both human culture and the natural world that culture belongs to.

Throughout the full process of hunting—seeking, tracking, finding, killing, transporting, butchering, preserving and cooking an animal—I often forget where I end and the rest of the world begins. The now gets lost in the riffling current of time. Millions of years of instinct take over and the hypercivilized human world dissolves into a background so cosmically remote it might as well not even exist. My purpose is as clarion as the lustful bugle of a bull elk just over the next ridge.

On a recent evening, I finished butchering enough elk meat to feed my family and our numerous guests for a full year. The following day we cooked a full meal almost entirely composed of food my wife and I had harvested ourselves through dedication, hard work, know-how and persistence. The magnificent flavor of that meal would have been reward enough, were it not for the inestimable meaning behind food procured the very old-fashioned way.

Among some Inuit clans, hunters paid respect to the spirit of the polar bear by hanging the animal’s skin or head in their homes for several days. That way, the polar bear spirit could see what a good man the hunter was, and it would share the news with other polar bears. I’ll soon mount in our family room the skull and antlers of the bull elk I harvested this year. I only hope the spirit of the elk approves of life at our home.

Benjamin Bombard is a producer of RadioWest on KUER, 90.1. He is the spouse of CATALYST associate editor Katherine Pioli.