Twenty years ago, 10 of us were taken hostage at the downtown Salt Lake City Library [now the Leonardo] by a mentally ill man who had a gun, a bomb and an intention to kill us if his demands were not met.

Life will give you whatever experience is most helpful for the evolution of your consciousness.
—Eckhart Tolle

Twenty years ago, 10 of us were taken hostage at the downtown Salt Lake City Library [now the Leonardo] by a mentally ill man who had a gun, a bomb and an intention to kill us if his demands were not met.

It happened on a Saturday morning, interrupting a Toastmasters meeting and a Tibetan sand painting ceremony with Buddhist monks. For six harrowing hours, Clifford Lynn Draper threatened us with death. When the final negotiation for our lives failed, he flew into a rage and said he would kill us one by one until he was taken seriously. His demands included gold and platinum bullion, back-pay for prior military service and the publishing of his writing in both Salt Lake daily newspapers. 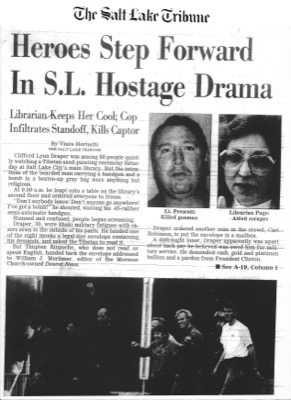 Earlier that morning, Draper had barricaded the doors to the small conference room in a way that prevented the police from getting in, and none of us could get out, so his threat to start killing us was confirmation of what I already believed: We weren’t going to get out alive.

Lt. Lloyd Prescott of the Salt Lake City Sheriff’s Department was working in his office next door when he learned that hostages were being taken at the library. He ran over and created a diversion that allowed him to be captured as well. Wearing civilian clothes that concealed the gun on his hip, he was able to infiltrate the room without Draper knowing he was a police officer.

As the excruciatingly slow hours passed, Draper spiraled deeper into insanity, becoming more irrational and threatening. Each time he pointed his gun at one of us and threatened to pull the trigger, or swore he was going to detonate the bomb, Lt. Prescott intervened and diverted Draper’s attention to himself, repeatedly risking his life to save ours. We didn’t know until the very end that Lt. Lloyd Prescott was the miracle we had been praying for.

In those last, dire moments, Lt. Prescott knew he had to take action to save our lives. Without any warning, he bolted out of his chair, pulled his gun and yelled, “Sheriff’s Department, everybody down!” and shot Draper to disable him. Draper fell on his back, dropping the detonator to the bomb, but managed to hold onto his gun. Prescott leaned over him and warned him not to move. Draper raised his gun. Pres­cott shot again and ended Draper’s life.

The second miracle we received that day was a little piece of tape. During the crisis, Draper noticed a loose wire on the inside of the detonator and secured it with tape. That little piece of tape interfered with the wires. It was the only reason the bomb did not explode when the detonator was dropped. When the bomb squad entered the room after we were evacuated, they determined the homemade bomb, modeled after a Vietnam-era claymore mine, was too dangerous to move. They covered and detonated it in the conference room. Later, they told us it had been powerful enough to kill us all.

The hostage-taking and the selfless actions of Lt. Prescott became national news. He was chosen Police Officer of the Year and the Clinton White House honored him for his bravery and his willingness to die in the line of duty. The media clamored for our attention and Lt. Prescott was hailed as a hero wherever he went. Some of us were invited to speak to audiences about our experiences. People were enthralled with the story and could not get enough information about what happened behind those barricaded doors. I was happy to speak about it publicly because it gave me the opportunity to thank Lt. Prescott and all the others who played a part in saving our lives. Then, as those things go, time passed and the story faded away to make room for the next big headline.

At the beginning it was cathartic to speak about the incident, but eventually I tired of telling the tale. My life was beginning to unravel in ways I did not understand but could no longer ignore, so I retreated to focus on getting my life back on track.

Three years after the ordeal, I was living in a way I could not have imagined for myself. Almost everything of importance had fallen away: My career dissolved and I lost my beautiful home in the Avenues, along with my treasured possessions. I moved back to Southern Califor­nia, drifting among family and friends.

No matter how hard I tried to recreate the life I once had, nothing worked. I began seeing therapists and was diagnosed with PTSD and depression. My challenges were attributed to the hostage experience. But there was something else that happened in the conference room that I had been unwilling to admit or speak about with anyone. I knew deep down that my unspoken experience was the primary reason my life had fallen apart and it began to haunt my every waking moment. 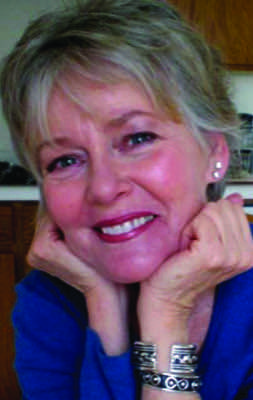 During those last, terrifying moments in the conference room, I truly believed Draper was going to kill us. I closed my eyes and with an anguished heart I silently whispered my final good-byes to the people I loved most and began a beseeching prayer that the pain of being blown to bits by the bomb or being shot to death would not last long. Then, my soul rose up and lifted out of my body through the top of my head and my astonishing near-death journey to the Other Side began.

I rushed forward in a darkness that pulsed with the most intense and powerful energy of love, tranquility and joy I had ever experienced. It felt profoundly comforting and familiar. My soul became expansive and free, reconnecting to an incredibly vast and limitless energy of an expansive universe I knew I had always been a part of, but had completely forgotten about during my human life, a Universe made up of everything in existence, a collective intelligence of every soul that had ever existed. My feelings of euphoria and joy expanded as I realized I was no longer bound by anything human and that I was completely free of all the constrictions of skin, bones, brain and muscles. My soul soared without limitation as I returned to my true essence of pure energy.

I realized I was not alone in that exquisite darkness. There were other souls traveling with me and they told me they had been yearning for my return since I’d left for my human experience. They said they had always been with me though I had forgotten them, creating the suffering and unhappiness I’d felt during my human time. I was overjoyed to be with them again.

Ethereal scenes from my human life began to appear. I saw times when I had demonstrated kindness, love and forgiveness; I saw times when I withheld love and acted out of judgment and a lack of compassion. But what I saw most were the many, many times that I had been unloving, critical and unforgiving of myself.

As the scenes came and went there was no judgment. There was no praise or reward for having been “good” nor was there punishment or recrimination for having been “bad.” I was reminded that my human experiences had been orchestrated to remind me of my soul’s purpose: to express a love of life, love of self and love of others.

The scenes ended and I was aware again of intense feelings of love, peace and joy. A question came to me: “What have you really done with your life?” “Not enough! Not enough!” I responded, realizing it was too late to change the truth.

The question had nothing to do with “good deeds” during my hu­man life; it was about expanding my consciousness and demonstrating my authentic soul. I was reminded that my actions on Earth impacted me and everything in existence. The moment I acknowledged how unconsciously I had lived, my grief instantaneously vanished.

A faint luminosity captured my attention. I knew instantly it was my final destination, the reason for my journey. I knew without question that its radiant core was a powerful Intelligence fueled by an incredible energy I had always been a part of. I knew it was my origin.

My soul began to synchronize with the rhythm of its powerful energy when suddenly, a loud, intrusive, human voice slammed into my consciousness: “Sheriff’s Department! Everybody down!”

I hurtled backward through the darkness, faster and faster, pleading, “Don’t make me go back! I don’t want to go back!” but my return continued. Just as my soul reconnected to my body, I received one last reminder: “Remember, it’s all about love; love of life, love of self and love of others” and my soul was back in my body, the astonishing journey ended. When my eyes flew open, Lt. Prescott stood, pointing his gun at Draper.

Back in my body

The amazing gift of my very brief visit to the Other Side changed the trajectory of my human journey and forever altered the filter through which I experience life. I learned incredible lessons and I believe that people who cross over (fully or partially) have their own unique experiences and learn their necessary lessons. I learned that we are unique in our human form, but our souls are interconnected. We are part of a greater collective energy that fuels everything in creation.

What I manifest energetically (consciously or unconsciously) makes an impact on the vast powerful universe. There are times when I wish I could forget that lesson. It has taken me years to accept that knowledge and integrate it into my life and while I am grateful, it continues to be my greatest daily challenge.

I am profoundly and forever grateful for each person (especially Lloyd Prescott and Clifford Lynn Draper), for each thought, prayer and action that turned something so terrifying into something so miraculous and provided me with an experience that led to the evolution of my consciousness and to understanding the purpose for my existence. I learned to express my love of life and to be mindful of the energy I create. My 20-year journey as a seeker of my authentic truth has been daunting, joyful, overwhelming, confusing and, at times, magical. I am deeply grateful for the sacred gifts I received when I was allowed to cross over to the Other Side.

Sue Allison resides in Northern California and Atlanta, Georgia. She spoke about this experience this past summer at Golden Braid Books.

This article was originally published on December 30, 2014.