Hell Shall Be Peopled With Seagulls 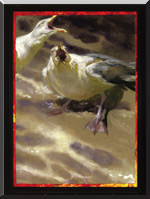 The seven deadly sins have fueled western culture’s fascination with all things deemed nasty. The an­cient checklist for bad behavior has been inspiration for plays, ballets, paintings, literature, music, film, even video games. Renowned American painter Jamie Wyeth’s tweak on the topic: his subjects are seagulls. His seven portraits of seagulls embodying the traditional Christian theological vices feel very realistic—you come away with the sense that they are almost photographic.

The seven deadly sins have fueled western culture’s fascination with all things deemed nasty. The an­cient checklist for bad behavior has been inspiration for plays, ballets, paintings, literature, music, film, even video games.

His seven portraits of seagulls embodying the traditional Christian theological vices feel very realistic—you come away with the sense that they are almost photographic—but are in fact quite loose for Wyeth. Seagull feet will merge into the inky background, as they do in “Envy,” or perhaps will be fast outlines against a flat background, as they are in “Greed.” A wing may be quickly rendered in fat brushstrokes, as in “Gluttony,” or a fish may be nothing more than a slip of white paint against a blob of grey, as in the same painting. But the subjects’ faces—in particular their hard, red-rimmed eyes—are meticulous, and give the viewer a clear glimpse into their owners’ souls.

Jamie Wyeth has been seriously studying art and producing paintings since childhood, and you can see his mastery in this body of work. It appears in the speed and deftness of the marks and the perfection of the proportions and volumes of the figures, the texture, color and especially the light. Wyeth’s craft would be enough by itself. It’s delicious and sensually pleasurable, like an Old World wine being made by a third-generation master California winemaker. The paintings are so technically good, though, that the medium becomes almost transparent and leaves the viewer contemplating not so much the paintings as paintings, but the characters, narratives and meaning of the paintings.

Wyeth, like his father, the painter Andrew Wyeth, is famous for capturing the soul of his subjects. These paintings are of seagulls. The birds are not anthropomorphized, and not at all cartoonish— they are clearly seagulls displaying seagull behavior. Two birds scream in rage in “Anger;” a gull swallows a still-live fish whole, the bird’s eyes glazed in mindless feeding in “Gluttony;” and in “Lust,” a satisfied-looking gull presses down on his, perhaps surprised, shrieking partner.

Wyeth also sneaks a bit of dark humor into the works, though the paintings aren’t meant to be ironic. The aforementioned live fish’s eyes are turned heavenward in a way that makes one think almost of a martyr, like Joan of Arc being burned at the stake. Similarly dark in its humor, but more difficult, maybe, is the painting “Sloth.” In the foreground a gull snoozes, shirking his work, while behind him a raucous pack does their species’ duty for the natural world and scavenges a bit of carrion. For the most part, the carrion is rendered in speckles of red and squiggles of yellow, with a few blotches of peach and then, wait, a…leg. Human and manly.

The work doesn’t seem to give lessons in morality or provide answers, but rather asks questions. As often happens in Wyeth’s animal portraits, the viewer is challenged to really know the subjects in the paintings, and to drop some of the divisions we like to put between our species and others. All seven works together, with seagulls—animals who are not biologically all that close to humans—acting out traditionally human behaviors, makes one wonder: Are the seven deadly sins ways in which humans act like animals, or are these behaviors natural and humans are arrogant to assume we don’t share them with the other inhabitants of the planet? An interesting effect of viewing the seven deadly sins through the lens of biology, the behaviors become ancient and at the same time current. Where is Wyeth referencing religious themes, and where is he referencing biological themes? The distinction tends to blur in these paintings.