Two friends make a pact and see it through to the end.

Six months before my best friend Steve ever knew he was sick we had watched a documentary about green burials. Fascinated that this option existed, we both agreed this was a much better way to be buried. Ashes to ashes, dust to dust—the idea that one could be placed in the ground in a biodegradable casket seemed natural and logical.

The next spring, Steve and I were out cleaning the yard when he told me he had a deep pain, pain that was different. It was deep within his bones. Steve never complained, so this alarmed me. I pleaded and insisted that he go get blood work done. A week later, Steve got his results. The doctors told him he had cancer all through his body. They gave him a week, at most a month, to live; longer, if he wanted to treat it with chemo.

Steve was a hard worker, a competent handyman and caretaker, an animal lover. He had been my friend since 1979 when he lived just up the street from my house. Later, we became neighbors again. Now we were roommates in my Emigration Canyon house.

Steve called from the hospital with the news. I waited for him on the bridge near our house. When he arrived we went inside, poured gin and tonics and toasted to life. 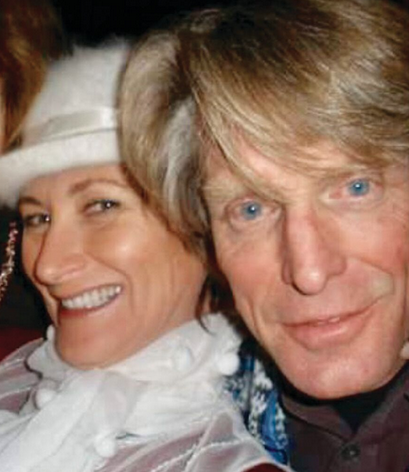 I said to him, “Okay, I will only do this one time and then we will make a plan.” And I began to sob. I told him I did not want him to die and that I loved him like a brother. We hugged and cried together. Then I looked him in his sky blue eyes and said, “What do you want to do? Fight it or not?”

“I won’t fight it,” he said. He was visibly tired. “I won’t make myself sick on chemo for six months trying to desperately stay alive. If it’s my time, then it is my time.”

Honestly, I will never know what came over me at that moment.

“Okay, I will see you through this,” I said. “Where do you want to die? This is your home and you can die here. I will be with you. I will help you get out of this world.”

Confused, he said he’d die in the hospital.

We fell silent, held hands and looked at each other for a long time.

I lifted my pinky into the air. “Pinky pact with me. Promise me that you will allow me to help you die with dignity, grace, love, humor and family.”

We made a pinky pact right then and there.

Plans for a brief future

In the following days Steve underwent many changes. He quit his job. He spent time with his dogs and continued to do house projects. We hoped he would live several months, take a vacation, go to Southern Utah. I made keys to the house for his immediate family so they could come and go whenever they desired. We tried to carry on a bit of normalcy.

I believe that Death is a dancer. We dance with death every day which in turn allows us to be so profoundly alive. No one really knows what happens after we die. But it is my experience that to be in the presence of someone who is dancing face to face with death is one of the most profound experiences that life gifts us. I believe, when this dance begins, in talking about it. Making a plan. Creating a dream. Steve and I had deep discussions about getting his will in order, about who he wanted with him in his last hours. We contacted hospice. Steve told his dad he wanted to be buried “green.” He told him that I would know what to do.

Steve’s condition deteriorated rapidly. He was having extreme headaches and pain throughout his entire body. Then, one day, Steve left a message on my phone. He had dropped his dogs off with his brother and checked himself into the hospital. The pain in his head had become unbearable. Sunday morning he called to say that the cancer was in his brain and that he was breaking out of the hospital, getting his dogs and coming home. I told him I would be there.

On Monday, his brother Patrick and I arranged for hospice. We somehow got him through that day, organized his meds and morphine and made sure he was comfortable. I discussed with Steve the idea of allowing friends and family to come to see him. He was convinced that no one would want to.

That evening Patrick, our friend Ron and I began the process. We stayed with him and told a lifetime of stories. We laughed, we cried and we shared joy. By the following afternoon a stream of family and friends had come and gone from his room, sharing the gift of love.

Something in the air

On Thursday morning I found Steve wide awake and doing the dishes. He said he’d experienced the strangest thing. In the middle of the night he had awakened and, feeling a strange burst of energy, attempted to get out of bed, but his legs had collapsed underneath him and he could not walk. With just the strength of his arms he’d pulled himself back into bed and fallen asleep. Later, he woke again, still in the dark. This time he’d found he was able to walk. He’d taken a bath and then had felt the need to clean. I told him to get back to bed where his little dog Dharma had positioned herself—she, too, was on her last days of life and seemed to be holding on just for Steve—and I would finish the dishes.

Something was different in the air that morning. Buddy, Steve’s big black lab, felt it, too, and became increasingly protective of Steve as the day continued. Only Barbara, Steve’s hospice care nurse who arrived later that morning, seemed to know what was happening.

“Look at the color of his nails. Look at the skin around his forehead. He is going to die today.” We sat next to where Steve lay sleeping in bed. She held my hands.

Barbara said, without any knowledge of what had occurred earlier that day, that sometimes when the spirit is leaving the body, the person may do various odd things. Sometimes they talk when they haven’t had the energy to speak for a very long time. Or they get up and clean. Expect the unexpected, she said, and don’t be afraid. She hugged me and said it could come at anytime. She administered Steve’s medications and prepared to continue on her rounds to her other patients. “Was I okay to be there alone?” she asked. I said yes.

At that very second Steve sat up abruptly, looked up to the left and the right and then at me. I ran to the side of the bed and held him.

“That was the only thing I was afraid of,” he said. “Being alone.”

I was sitting out on the deck when Pat, Steve’s brother, arrived. I told him what Barbara had said. Pat went inside and spent a long time alone with his brother. When he came out he walked away from me, to the far side of the deck, and wept. We both wept. Then he crossed to me and I held his hands.

“Today we will get your brother out of here with love, grace and dignity,” I said.

By mid-afternoon, Patrick was able to gather all of his immediate family. We all sat with Steve. We took turns telling him how much we loved him. We played music and placed our hands upon his head, his feet and his heart. His breathing became more labored. We told him again that we loved him. We told him it was okay to go.

I had his head in my hands. Patrick had his back. His mom held his left hand. His dad held his feet. Cousins and brother stood by his side His step-mom and my mom were there as well. He grasped his Mom’s hand so tight. She said, “I have you, my son. I have you.” Steve took one last breath and left his body.

We were fortunate enough to remain present with Steve for some hours after he passed, continuing to tend to his body and feel the ebb of his energy within the room. I closed his eyes and chose the clothes he would be buried in. All of us dressed him.

When the people from Starks Funeral Parlor arrived, they gave us a beautiful white linen shroud. I signed the death certificate while the brothers transferred his linen-wrapped body to a gurney and carried it out to the waiting funeral car. At the funeral home, Steve’s body would placed on dry ice (in cases of green burial, a body can be preserved on dry ice for up to five days) and preserved until we could reclaim it for burial.

Everyone left. Little Dharma and Buddy went with Steve’s brother. I went inside and fell into a deep sleep.

Putting a life to rest

When I awoke the next morning I looked out the window and saw Steve’s car. His shoes rested just outside his door. For a moment, I wondered why he wasn’t at work and then the events of the day before hit me, I doubled over and began to weep from a place within myself that I never knew existed. I could not stop.

My mom called and realized I was not okay. She drove up and held me while I sobbed.

That day was surreal, full of packing and cleaning, moving the hospice bed away. I tried to create order as if, in doing so, everything would go back to normal.

I received word from Patrick that he had been able to arrange burial with the place where we wished to put Steve at rest. He had also obtained the necessary paperwork to transport Steve’s body and bury him. In the meantime, little Dharma had also passed away. 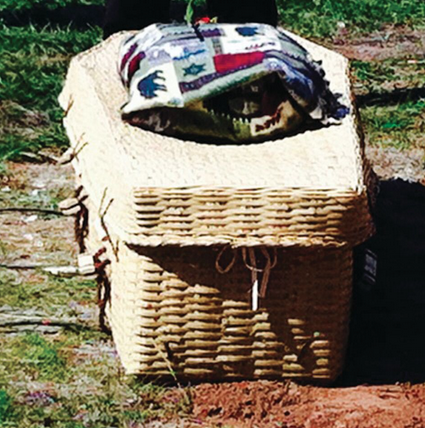 With everything in place for the burial, Steve’s family headed to Southern Utah. His chosen resting place took us out into a beautiful field. His brothers and best friends carried the biodegradable bamboo casket. Dharma, wrapped in an Indian blanket, was laid on top. His brothers wrapped ropes around the casket and slowly lowered it into the hole. A Buddhist minister spoke to us of life and death and the fine line that separates these two energies. We dropped beautiful tree branches, wildflowers and poems into the hole. I spoke of my experience and the profound gift that was Steve, and thanked his extraordinary family for trusting me to help him die and for carrying out his final wishes. 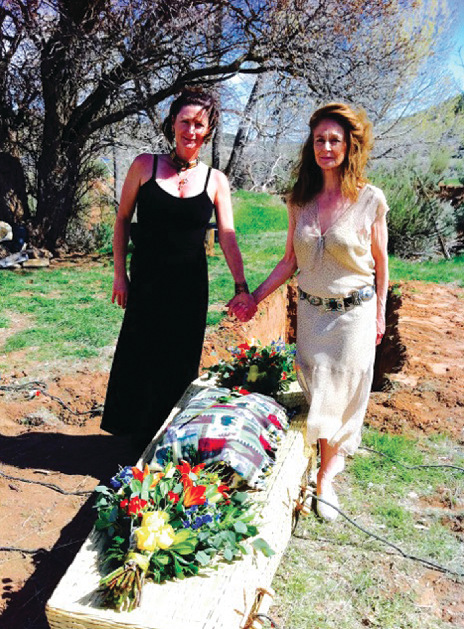 Our society tends to push Death away. We give the responsibility to someone else. We embalm and preserve and encase the body as if this will give us peace and give the deceased everlasting life. But there are alternatives.

For me, knowing that we have the choice to allow our bodies to decay naturally into the earth is comforting. Being present in the dance of death has allowed me to be more fully alive. To have had the gift to help Steve die with love, dignity and grace was truly the most powerful and deeply moving experience in my life. There was grace and gratitude.

I want to be buried green.

Stephanee Grosscup is a Salt Lake City-based figure skater, coach and chor­eographer whose career spans four decades. She is a longtime dear friend to CATALYST.

This article was originally published on October 2, 2017.