In April, the Bureau of Land Management allowed Garfield County to chip-seal 7.5 miles of a remote dirt road, reigniting a historic environmental controversy over who owns nearly 36,000 miles of dirt roads that cross federal public lands in Utah. 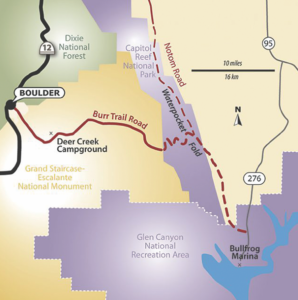 At issue is the Burr Trail, a 66-mile-long dirt road that connects Boulder to Bullfrog Marina through Capitol Reef National Park.

Fast forward to the present, and the Bureau of Land Management (BLM) project description for the chip-seal says that “Garfield County is the holder of an [sic] Revised Statute (R.S.) 2477 right-of-way for the Burr Trail.”

That’s not actually true. R.S. 2477 is an 1866 law that allowed building highways across federal lands, but it was repealed in 1976. In order to claim ownership, counties have to prove that a road was continuously open to public use for 10 years prior to 1976.

As a lawsuit filed by the Southern Utah Wilderness Alliance points out, “Contrary to rural legend, no federal court has ever quieted title to any stretch of the 66-mile Burr Trail in favor of Garfield County, and thus the County has no such right-of-way.”

This “mistake” is hardly innocent. R.S. 2477 claims are a major tool for the transfer of public lands movement and would allow county government to convert jeep tracks into paved highways. Since Wilderness Areas are defined by being roadless, a successful R.S. 2477 claim could invalidate wilderness status.

By all appearances, BLM and Garfield County knew what they were doing was wrong. Approval for the chip-seal project was done in secret with only a 15-day public comment period, and Garfield County commenced road work several days before the final approval had even been made public. The State of Utah has been trying to implement a large-scale R.S. 2477 road grab since 2012, and it looks like someone is trying to circumvent the courts by making false R.S. 2477 claims. 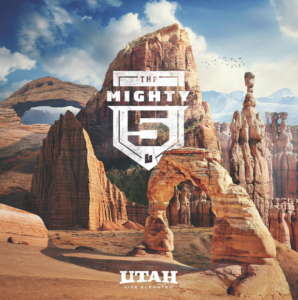 Researchers at Utah State University found that the “Mighty 5” tourism campaign launched by the Utah Office of Tourism in 2013 worked all too well to boost visitation to Utah’s National Parks, drawing an estimated half-million additional tourists to Arches, Canyonlands and Capitol Reef. Utah law allows counties to charge a tax of up to 4.25% for hotel stays, but the counties have to spend at least 47% of proceeds on promoting tourism, while only 53% can be spent for tourism mitigation. That’s becoming a problem, especially for severely overtouristed towns like Moab.

During peak-season, weekends traffic jams at Arches stretch from the entrance gate all the way to Highway 191. The park has installed a traffic webcam to scare visitors away. In 2017, the National Park Service proposed a congestion management plan for Arches with a reservation system, but it drew criticism from local tourism boosters who feared that visitors would be disappointed if they couldn’t go to the park. An alternate proposal is to develop more entrances and more trails, in essence vastly expanding the footprint of tourism into backcountry areas.

It isn’t just the national parks that are suffering from overuse. The BLM Moab Field Office is considering camping restrictions in the Klondike Bluffs area near Arches due to an almost constant use for dispersed camping that is “damaging soils, and vegetation, wildlife habitat (including that of threatened and endangered species), cultural resources, paleontological resources, recreation opportunities, scenic values and grazing.”

A legislative audit found that Utah counties want to relax the requirement to spend money on more advertising when they desperately need the money to deal with the problems caused by having far too many tourists.

Performance Audit of Counties’ Use of Tourism Promotion Funding

An abundance of Painted Ladies! 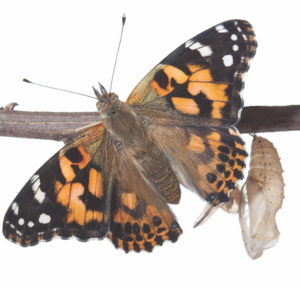 Back in 1935 Utah’s spring migration of Painted Lady butterflies (Vanessa cardui) was described as filling the air with a windstorm of butterflies, “the effect resembling an autumn day when the wind is whirling the leave about in great confusion.” There weren’t quite that many this spring, but there were still a lot of painted ladies.

An unusually wet winter in Mexico and Southern California caused a superbloom that in turn sent a migration of orange and black Painted Ladies fluttering across the Western United States.

Painted Lady caterpillars like to eat thistles and dandelions. The butterflies are pollinators that feed on nectar. There is likely to be a second wave of butterflies in June or July once eggs laid by the migrating butterflies hatch.

The Utah Legislature is failing to protect the environment, according to the 2019 Legislative Scorecard issued by the Utah Chapter of the Sierra Club.  The scorecard rates legislators according to how they voted on 20 key bills. In a press release, Utah Sierra Club Director Ashley Soltysiak lauded legislation to support public transit, air quality and water conservation, but added, “when the legislature approves nearly $55 million for a Mexican coal port, refuses to consider tax credits for electric vehicles or carbon pricing, and diametrically shifts nuclear waste policy in the wrong direction, the outlook for Utah’s environment is bleak.”

The American Lung Association grades Salt Lake County “F” for clean air. As a whole, the Salt Lake metropolitan area (Salt Lake City-Provo –Orem) is ranked as the 8th most polluted city in the nation for particle pollution and 14th most polluted for ozone.

The 2019 release of the annual State of the Air report says that climate change is making air pollution worse since hot weather is related to high ozone days and spikes in particle pollution. Nationwide, air pollution emissions have dropped steadily since 1970 thanks to the Clean Air Act, which is currently under attack by the Trump Administration. Federal rules affect Utah because enforcement by the Utah Division of Air Quality (DAQ) is pegged to federal clean air standards. Some areas of Utah have been out of compliance with federal standards since 2006.

In April, the Utah Department of Environmental Quality submitted a new air quality plan for Utah after a coalition of clean air activists threatened a lawsuit. Unfortunately, the new plan fails to account for projected population growth, or for emissions from the inland port, a massive industrialized zone planned for Salt Lake City’s Northwest Quadrant. However, thanks to SB144 (sponsored by Utah Senator Luz Escamilla in the 2019 Utah Legislature General Session), air quality monitors are being installed at the inland port site in order to establish a baseline and monitor environmental impacts.

The good news is that as a result of the new air quality plan, Rio Tinto has permanently closed a coal plant that has powered the Kennecott Copper mine since 1943. Instead, Kennecott is using renewable energy certificates from Rocky Mountain Power, a move that could reduce the carbon footprint of the site by as much as 65%.

The Trump Administration keeps losing in court, and that’s a good thing for Utah’s public lands.

In March, the Washington Post reported that in a rush for deregulation, Trump officials have failed to follow basic rules outlined in the Administrative Procedure Act that governs the process of making new regulations. So far, Trump’s “win” rate for lawsuits is only about 6% compared to the normal win rate of around 70% for government cases.

In May, this sloppy policymaking handed two legal victories to the Southern Utah Wilderness Alliance. One judge found that the Bureau of Land Management violated the law by offering oil and gas leases without considering environmental impacts from greenhouse gas emission and climate change. Another judge blocked deforestation of more than 2,500 acres of pinyon-juniper forest in the Desolation Canyon and Jack Canyon Wilderness Study Areas due to improper environmental review. The Bureau of Land Management threatened to remove the trees by driving a giant wood chipper through the forest, a process known as “forest mastication.” So called “vegetation management” has become a strategy to block conservation management of public lands, essentially by destroying any natural values worthy of preservation.

In yet another show of bad faith toward American Indian tribes, interior Secretary David Bernhardt (replacing the disgraced Ryan Zinke) has appointed a Monument Advisory Committee (MAC) for the reduced boundaries of Bears Ears National Monument that is composed entirely of people who opposed creation of the Monument.

Worse, only two slots on the 15-member committee represent American Indian tribes (five tribes have cultural ties to Bears Ears), and both were appointed from just one of the seven Navajo chapters in Utah.

Under president Trump, the original monument has been broken into two small remnants re-named Shash Jáa and Indian Creek units.

The Bears Ears Inter-Tribal Coalition opposes the premature formation of an advisory committee since the courts have not yet decided whether Trump’s 2017 proclamation to downsize Bears Ears N.M. was legal.

Sally Jewel, who served as Interior secretary under president Obama, predicted in March that the tribes will win their lawsuit and the original boundaries of Bears Ears National Monument will be restored. The Bears Ears MAC is scheduled to meet on June 5-6.