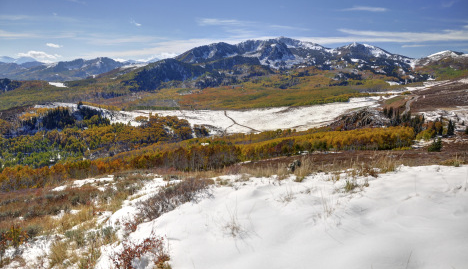 Rising from the center of the southeastern Utah landscape and visible from every direction are twin buttes so distinctive that in each of the native languages of the region their name is the same: Hoon’Naqvut, Shash Jáa, Kwiyagatu Nukavachi, Ansh An Lashokdiwe, or “Bears Ears.”

Bonanza Flats is for sale, and it could go to developers or to open space. The 1,400 acre property is located on Guardsman’s Pass between Deer Valley, Park City and Brighton. Park City has agreed to tax themselves $25 million to purchase the property, but it will cost $38 million to outbid the developers.

Make a contribution to save Bonanza Flats:

Help keep an eye on the Utah Legislature

Now is the time to sign up for e-mail action alerts from your favorite environmental groups. The 2017 General Session of the Utah Legislature started January 23 and runs through March 9, 2017. Environmental activists are gearing up to monitor legislation in order to support good bills and oppose the stinkers. You can help by making phone calls, and by showing up for hearings and protest rallies.

Who represents me? Find your Utah Legislators: le.utah.gov/GIS/findDistrict.jsp

On their very first day in session, the Republican-controlled 115th U.S. Congress launched a fresh attack on Utah’s public lands. The House passed a rule that defines public lands transfer as “budget neutral,” essentially creating a legislative fiction that public lands have no value and generate no revenue. The amendment was sponsored by Utah Congressman Rob Bishop (R-Ut-1) in order to make it easier to give away valuable public lands to state control.

Utah Congressman Rob Bishop (R-UT-1)— “For leading a fanatical campaign to give away America’s iconic public lands, our forests, deserts and wildlife refuges to state and private ownership for mining, logging, fossil fuel development and other destructive uses.”

The Center for Biological Diversity gives the annual award to “the person or group who has most aggressively sought to destroy America’s natural heritage or drive endangered species extinct.”

On January 21, clean air advocates rallied at the Utah State Capitol urging State legislators to adopt a list of 19 policies to help clean up dirty air along the Wasatch Front. Three of the most important ideas are:

2) develop a serious State Implementation Plan (SIP) for Air Quality (Utah has been in violation of federal health standards for more than 10 years, and EPA recently downgraded nonattainment status to “serious” ), and

3) stop plans to divert water from the Bear River which would turn the Great Salt Lake into a toxic dustbowl.

Citizen groups that developed the plan include HEAL Utah, Physicians for a Healthy Environment, Utah Moms for Clean Air and Western Resource Advocates.

Salt Lake City gets over 60% of its water supply from the Wasatch Mountains watershed.

But don’t put away your “Protect Bears Ears” T-shirts just yet; anti-environmentalist Utah politicians are threatening to use litigation and legislation to try to undo the new monument.

Although San Juan County commissioners claim that the push for a monument came from “outside special interest groups,” in fact the plan originated with local Native American tribes seeking more influence over management of ancestral lands that are not located within current reservation boundaries. Utah Diné Bikéyah (a Navajo nonprofit organization) laid the groundwork with a mapping project asking tribal elders to identify sacred and culturally significant sites. The resulting proposal was endorsed by governments of five local tribes including Hopi, Navajo Nation, Ute Indian Tribe, Ute Mountain Ute, and Zuni Pueblo, who coordinated as members of the Bears Ears Inter-Tribal Coalition.

Environmental groups and the outdoor industry supported the Bears Ears proposal, but were not leading the effort despite false claims by Utah Republicans that they were.

At first, the tribes hoped to negotiate a Bears Ears National Monument as part of Congressman Rob Bishop’s (R-Ut-1) Public Lands Initiative (PLI), but they withdrew from the process after Utah politicians shut them out of discussions and pretended that anti-monument individuals represented the tribes as a whole.

A letter sent from the Inter-Tribal Coalition on December 31, 2015 to Bishop and Jason Chaffetz (R-UT-3), complained, “Our strenuous efforts to participate in the PLI, and related proceedings before that over the course of the past six years, have been consistently stonewalled. We have never been taken seriously.”  The letter concluded, “We don’t feel we can wait any longer before engaging with the Obama Administration concerning our proposal in the hope that they will advance our proposal via the Antiquities Act.“ In the end, tribal leaders did meet President Obama, and he did establish a 1.35 million acre monument.

The next fight for Bears Ears will be to keep the U.S. Congress and Republican-controlled Trump Administration from reducing the Monument size or eliminating it all together. Trump has nominated Ryan Zinke, a Republican congressman from Montana, as Secretary of the Interior. During his confirmation hearing, Zinke was asked about Bears Ears. He stated that he did not believe that the designation could be completely undone, but also said that the president has the authority to amend a monument. If Zinke is appointed, he said that he will visit Utah and make a recommendation to the president.