Don’t worry,” said Carol Koleman, tilting the machete and angling my arm a bit more. “No one will even recognize you.” We were in the CATALYST garden, armed (literally) with all manner of objects for the October cover’s photo shoot. Carol, who had authored and illustrated our popular Goddess series, had conceived the image of the eight-limbed goddess Durga and I was posing for what was to have been a heavily Photoshopped image.

As it turned out, it looked an awful lot like me, except for six arms. I was in awe. Carol dubbed me the Goddess of Disco­very. I proofed the page, the title clearly reading “Goddess of Discovery.”

Through a fluke (meaning the “how” is long and boring; only the “what” matters here), the wrong cover got printed. What arrived by the palletload read “Goddess of Compassion.” 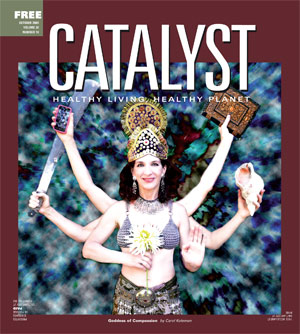 I freaked. I am so not the goddess of compassion, and was embarrassed that anyone might think I’d presume as much. I asked Pax to get the correct text onto the website version, at least, and he got right on the task.

Except now it read “Goddess of Inspiration.”

“I thought that’s what you said,” he replied, and calmly changed it again.

My friend Naomi called. “I just loved that image of you as the Goddess of Prosperity!” she said.

And so we realized then and there that I am the Rorschach Goddess. Or maybe the Gestalt Goddess. Certainly, what you see says more about you than me.

“You look a lot like the goddess on the cover of that magazine,” said a stranger in a restaurant. I didn’t dare ask her what goddess… but just smiled.

In September I wrote about the mysterious and awe-inspiring suicide of Misha, longtime CATALYST cat. What I did not tell you was that within an hour, inside my perfectly nice University-area house, two friends saw a rat scuttle out of the kitchen and into the sunroom. I was panicked, and horrified. Poor Misha’s body wasn’t even cold and a rodent had moved in.

It was not entirely unexpected. Neigh­bors had reported rat sightings, both outdoors and in, all summer. Rusty, next door, even found one swimming in his toilet.

By the next night I understood terror, and terrorism, a whole lot better. I had a sense of what PTSD must be like. I jumped at every shadow and squeak. I could not make myself go through the kitchen to my bedroom. I slept on the couch.

The night after that, I gave myself a good pep talk, I marched up the steps to the kitchen. Flipped on the light. And there, on the counter, sat one large, startled looking rat. She began down the face of the counter, thought twice and pulled herself back up. Squirmed behind the Vita-Mix.

Mike Cowley was still downstairs working. He came to save the day, flushing out Ms. McKenzie who leapt off the counter and followed her previous trail.

The next night she consumed an entire bag of organic peanut butter doggy biscuits, incising her way through a sealed cardboard box and a cellophane bag with barely moving it from its place on the counter. Those smart drugs seemed to be working better for her than for me.

McKenzie sightings continued, on and off, for a few weeks, as we debated what to do. I was partial to anything that would make her disappear, and thought the sooner, the better since John had reminded me what I had invited by making my rat female. Greg, good Buddhist, was adamantly against kill traps. “Get a cat,” he said.

“That’s like saying it’s okay to hire a hitman,” I said.

Garrett delivered a live trap. One night it went off. The food was gone. The only thing inside the trap was one rat turd.

A rat in the house: At first the thought made me feel alone, ashamed. Then I found out lots of people have had rats in the house. Rats happen, even in “nice” neighborhoods. Even in my own.

I was contemplating hiring a rat terrier when practical Pax showed up. He bought three kinds of kill traps and another live trap. He set up the live trap next to a kill trap.’ 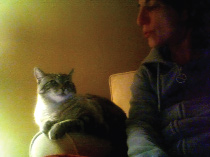 A critter—smaller than McKenzie —chose death. It was swift and completely silent. Then, a few nights later, again; a similar creature. McKenzie apparently was, indeed, female.

A likely entrance was eliminated. Concurrently, the heavy hitter arrived: Xena, warrior princess, a gorgeous sapphire-eyed lynxpoint Siamese. She caught—and released—a squalling rat the first week. Word got out: This house was once again guarded. No more rodent sights, sounds or smells since.

Eager to be a top-notch kitty mommy, I went off to Dr. Nan at Dancing Cats with Xena for her “wellness” checkup. I came home with a healthy… male. Xenon. Funny, I never thought to look, and neither did the friends who’d found him and cared for him the past year. It’s an odd thing, to switch genders. The animal and the actions are the same, but the labels are different. Of course now, a few weeks later, he is all guy. How could I have ever thought otherwise?

We’ve seen a lot of Dr. Nan this summer and fall. The dogs, Phoebe (13) and Sarah (15), kept taking turns dying, or so it would appear; but it was fixable: hip problems, pinched nerves, incontinence. Sarah, always prone to drama, would sigh, cough and moan. Both would fall down on the hardwood floors. It was pathetic. But every time Dr. Nan worked her magic, and they came home renewed. No exorbitant procedures, frantic gestures to prop up dying bodies: simply acupuncture, Reiki and homeopath­ics. If you wonder if these modalities work, as a dog.

But then, in early October, Phoebe, already completely deaf, was not renewed. She went out of her way to get stuck under chairs, in shrubbery, in corners. The treatments had helped her neurological difficulties and cured her incontinence but other problems, likely related to a brain tumor, were growing more acute. I chose not to pursue more aggressive means of diagnosis and treatment. Within a week she stopped eating; no coaxing, no treats, would sway her. My little Phoebe bird was about to fly.

In all my years of pet ownership, I have never put an animal down. But this felt right. We had been saying our goodbyes over the last few days. All summer, to tell the truth. 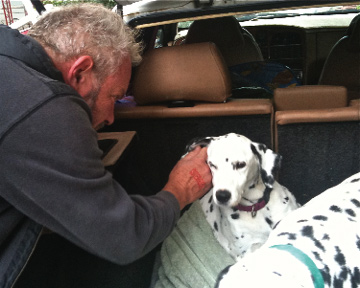 Phoebe gets ear noogies from John as she goes off to an acupuncture appointment.

I counted breaths as Nan began to slowly inject the powerful anethesia. Five. Five breaths, and then no breath. Stillness. Phoebe had shrugged off her furry spotted coat and was free.

I turned to John, amazed.

We buried Phoebe in the back yard, between Einstein and Tillie on one side and their mother, Eloise, on the other. I sensed their clannish presence as they waited for her, this outlander who was likely a cousin. The sheltered candle on her grave burned vigorously, day and night from dusk Friday till Tuesday morning, through rain and snow. I think she has made it through the veils.

Three pets down, this year, and an old dog remains. I’ve seen life turn on a dime. But Sarah Jessica Barker has spunk and a dead-on appetite. I’ll give her my best for the days remaining.

You can tell I’m just itching to talk about healthcare, can’t you. Luckily, we’re out of space. But I will say this: Put the money in the middle, not at the end. Good dental care. Good food. Dogs and people and cats, too: When the end is near, learn grace. Say good night.

Greta deJong is editor and publisher of CATALYST.