Her work began in the 1980s during the turbulent years of the Hopi-Navajo land dispute, when 10,000 Diné (Navajo people) were forced to relocate from traditional homelands on the Big Mountain reservation and surrounding areas of Black Mesa in northern Arizona. These times were especially hard on the elders, who faced  major food insecurity.

With a growing awareness of the desperate situation and with the assistance of Grace Smith Yellowhammer, a traditional Diné woman who led some of the earliest trips to help traditional Navajo elders on the reservation at Big Mountain, Linda Myers, a gift shop owner, artist and single mother, began journeying to the Navajo reservation to deliver needed food and clothing. 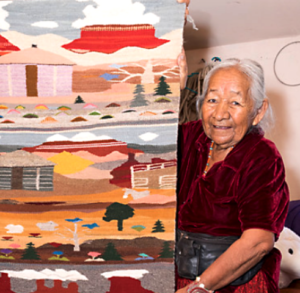 In traditional Native communities, the elderly are revered for their wisdom and close connection to the ancestors. But Native elders also comprise one of the most economically disadvantaged groups in the nation. In impoverished, remote locations of the Navajo reservation, many Navajo elders live in traditional hogans some 30 miles away from services.

Medical supplies, food and firewood are vital, especially during cold winters. As food and clothing needs revealed other needs, Linda’s solo trips gradually evolved into a more complex, logistical endeavor. She founded her organization, Adopt-A-Native-Elder, based in Park City, to support the elders in a more sustainable way.

Adopt-A-Native-Elder, its staff and team of volunteers, travels to the Navajo Reservation twice a year to spend several weeks with the elders. Currently, 800 Navajo elders are sponsored, and thousands of others on the reservation are supported. Anyone can become a sponsor by committing to provide an Elder with two sets of food boxes annually, delivered by the Adopt-A-Native-Elder team during a spring and fall food run. Other donations are collected for additional firewood, medical supplies, school supplies, food bundles and more.

But Myers recognized early on that meeting these basic survival needs—food, medicine, warmth—was not enough. Honoring and respecting the traditional Navajo lifestyle also meant helping the elders secure needed income while living out their lives in the traditional way.

One day early on, while delivering food on the land, Myers was approached by a Navajo grandma named Katie Fur Cap, holding out a hand-woven rug.

Myers had never sold a Navajo rug before, but she did own a small shop on Main Street in Park City. She agreed to take the rug and hung it up in her shop next to Katie’s picture. Sure enough, Katie’s rug sold.

When Myers returned to present the profit, there Katie stood with another rug in hand, accompanied by three of her sisters, each with a rug of her own.

“More and more people [from the reservation] wanted me to take their rugs home to sell, too, so I started contacting museums and other places to see if they would buy the rugs,” Myers told me in a recent phone interview.

This model became challenging, though. “At the time, I was an artist and I didn’t like consigning my work because sometimes I didn’t get paid from stores. So, it was really hard for me, as an artist and single mother, to say, ‘Yes, I can take your rug and not pay you [now].’ It was very important to me, and it still is today, that when they give us a rug, they get all proceeds.”

Myers was coming to understand the importance of a traditional Navajo rug. Navajo weaving is done the same way now as it was on the first Navajo loom, by hand, one strand at a time, weavers sitting at a loom for hours and hours. Historically they have not reaped the whole profit of their hard work.

Navajo rugs are sought after for their beauty and uniqueness, but they are also a true Native American folk art, a way of preserving culture and tradition. Myers held that the weavers should be honored for their craft with full pay.

Adopt-A-Native-Elder developed a program that would allow traditional weavers, such as Katie Fur Cap and her sisters, to sustain themselves in this traditional way.

The Adopt-A-Native-Elder Annual Navajo Rug Show & Sale has become a yearly market for the weavers, in which they receive all of the proceeds from the sales of their rugs. In addition, the program delivers about $20,000 in yarn to elders for the upcoming year to help encourage weaving and sustain it as a traditional livelihood.

The Navajo Rug Show & Sale is celebrating its 31st year in 2020. This year’s event focuses on two themes within contemporary Navajo weaving: Sacred Waters and Autumn.

“The them of Sacred Waters represents the fact that water is life. Most of the elders don’t have running water. When they wove these rugs for us, they wove beautiful rivers running through mesas and things like that, that used to happen when they were young before everything dried up,” Myers says.

The show will feature 32 of these special rugs by 20 of the program’s elders along with other rugs from close to 70 other Navajo weavers from the reservation. The huge difference this year: The rug show is going online to help ensure the health and safety of weavers, volunteers and patrons during the coronavirus pandemic.

“This is the first year the weavers won’t be attending the show and it’s going to be very hard for them financially. When we’ve had the show at Deer Valley, we’ve had huge attendances and the elders had so much success in selling their jewelry and rugs in person. It’s important when people can go up and meet weavers directly and learn about each rug’s importance.”

Despite knowing that their financial success might be somewhat compromised this year due to the virus, the weavers are still eager to show their rugs and the Adopt-A-Native-Elder team is working hard to make the online show a success.

Now, more than ever

The fact is, the show is needed now more than ever, Myers says. Trading posts have closed, and other rug auctions were canceled this year due to the pandemic. Some weavers have had no income this year because they’ve had no place to sell.

“Weaving is a livelihood. Most of our weavers are 75 [years old] and above. They’ve been doing this now for many, many years and count on the money for food, for firewood, for hay for their sheep during the winter. So, we’re going to do our best with the virtual rug show to represent the elders, sell their rugs and bring awareness to their needs.”

Covid-19 has taken the lives of 20 program elders, as well as 30 family members, says Myers, with an additional 18 elders still in recovery. She hopes this year’s show brings as much support as possible. The elders and their families need it more than ever. “We appreciate all of the people who have come over the years to Deer Valley to see the rug show and we hope they will watch our virtual rug show and continue to support these families.”

The rug show begins November 12 at 5pm. Patrons can log onto the Adopt-A-Native-Elder website for a series of short videos on traditional cultural teachings and the spiritual significance of the rugs and their designs, followed by the sale itself.

“Whether it’s a fine rug or what we call a ‘heart rug’—where an elder who can no longer see weaves a rug from feel—we hope to sell many rugs and continue to help carry on the tradition of weaving.” All prices of the rugs are set by the weavers and all proceeds from the sale are kept by the weaver.

Even for those who cannot afford a rug during this time, the team has other options for ways to help support Navajo weaving, the elders and their families.

“We give a lot of $40 yarn boxes to those of younger generations to encourage weaving to continue. We also have a food certificate program for $25.” You might wish to contribute to the ceremony fund, the blanket fund, the children’s fund, or buy some Blue Bird flour. “Whether somebody can buy a rug or not, they can always make a donation to support the families.”

Linda Myers was just about to take off on a trip to the reservation when we had this conversation. In her voice, there was pain from the recent losses she had witnessed; and sadness, from describing a difficult year for the families she represents. But when describing the patterns on some of her favorite rugs for sale at the upcoming show—Bobby Jo White Hair’s beautiful picture of the harvest moon over the desert; all the colors running through the threads of her sister’s autumn trees rug—it was clear:  her intense admiration for a tremendously resilient community, and her confidence in that resiliency to endure.