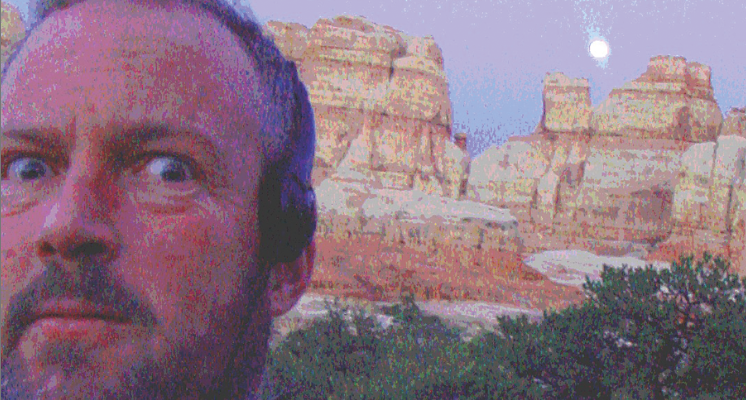 Photo by John deJong.This month’s cover picture was taken from the top of a small butte overlooking the junction of Nielson Wash and the Fremont River, half way between Hanksville and Caineville. An old cemetery, containing three or four old graves sits alongside an old airstrip used when uranium mining was big, 65 years ago. Much weathered wooden headboards, a couple of sprays of plastic flowers and a barbed wire fence mark the site. I wonder who lies buried there? Nielsons I would guess. What a view for eternity! To the north Factory Butte rises above a plain of badlands. To the west, Capitol Reef, Boulder Mountain with it’s thousand lakes and Thousand Lakes Mountain with all it’s boulders pile up to 10,000 feet to block the late afternoon sun. To the east bits of the La Sal and Abajo mountains, 60 miles away, barely peak above the low horizon. And to the south the view of the Henry Mountains on the cover.
John deJong is a lot older than when he took the selfie, above, with his first digital camera.