If you ask the average person for an opinion about snakes, the result will range from unbridled excitement to utter revulsion. As a confirmed, self-diagnosed snake addict, I fall into the first category. I have loved snakes since I was a kid, and the kid within me still thrills at the prospect of finding or catching a snake. Teaching people about snakes and being a snake ambassador have al­ways been second nature to me, and I knew early on that saving snakes was a cause I believed in.

Long be­fore Americans knew who Steve Irwin was, I was driving remote roads in Utah’s west desert in the middle of the night, catching snakes that had gotten too comfortable warming their bellies on lonely asphalt and moving them away from the carnage of infrequent but deadly car traffic, mostly on the road that cuts through Skull Valley and leads to the military base at Dugway.

In the languid warmth that rises from the pavement after dark, the road gives back the heat it stole during the day, and snakes that come across this alien surface at night will often pause and linger there.

It was the mid-’70s, and I was a teenaged driver with a newly minted license. I found it convenient to put my kid brother Gary and his best friend Keith on the hood of my orange ’68 Chevy as I drove slowly along desolate ribbons of blacktop in the summer darkness. Dangling their legs in front of the grill, they could jump off and instantly grab any snake that appeared in my headlight beams.

To my great satisfaction, I discovered that by simply tapping the brake pedal, I could launch my brother and his friend off the hood and onto the roadway anytime I wanted. This potential kept them alert.

We usually saw gopher snakes, Mormon racers, or the elusive desert-striped whip snake—all harmless species—but occasionally providence would place a rattler in our path. This was always cause for excitement. We’d put the snakes in pillowcases borrowed from my mother’s linen closet, tie the open end securely, and drive them closer to the foothills and away from danger.

Too often we’d see snakes that had already been run over, sometimes deliberately, since many of them were on the shoulder of the road, and I had to wonder about the type of person who would swerve to hit a snake at 60 miles an hour. Is their contempt for snakes so great that they are willing to risk their own lives to kill one, and if so, why?

There are approximately 2,000 snake species throughout the world, and 31 of them live in Utah. Of those, only seven are venomous and they are all rattlesnakes. Any snake in Utah that doesn’t have a rattle is harmless. Almost nowhere in the world does identification get any easier than this.

The other 24 species include the rubber boa (a true boa similar to the boa constrictor of South America, only smaller), three species of garter snake, two king snakes, one milk snake, the Great Basin gopher snake, and more than a dozen other innocuous, reclusive, nocturnal or otherwise seldom-seen serpents that inhabit the state from border to border and mountain top to desert valley. 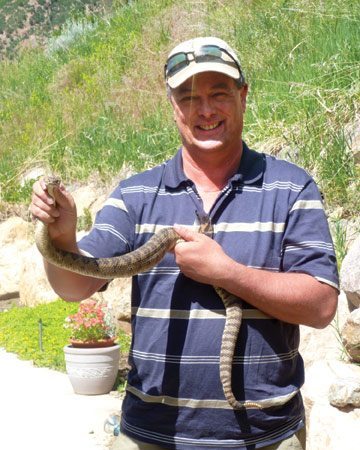 When I remove a rattlesnake from someone’s yard, it provides an excellent opportunity to educate them about the intrinsic value of snakes in the environment and their direct benefit to humans as a free source of rodent control. Hawks and eagles eat mice and rats, but only the adult animals, whereas snakes go into burrows and consume the babies, effectively eliminating hundreds of thousands of future rodents and the diseases they can carry.

The act of physically rescuing snakes and simply talking to people about them can have the same result. A woman I work with told me that she was driving a narrow dirt road with her husband when they saw a large snake, probably a gopher snake, basking in the mid-morning sun. From her description, the snake stretched from one side of the road to the other, but people who dislike snakes often overestimate their length.

The lethargic reptile was as limp and inanimate as a rope and completely oblivious to their presence. My friend confessed that there had been times when they had thoughtlessly driven over snakes in the past, but she saw this one and remembered the brief conversation we’d had about snakes several months before.

She said that thinking of me and how much I respected snakes wouldn’t allow her to harm this one, so she told her husband to stop the truck. They waited patiently for the snake to cross, neither of them willing to get out of their vehicle and coax it along. For me, this is like saving snakes by remote control; it amazes me how just a little bit of knowledge can change human behavior.

More than anything, I enjoy teaching children about snakes. Children who absorb factual information will know it their entire lives and will perpetuate it by sharing it with others, including children of the future. Maybe each generation can become smarter and more compassionate. The Animal Planet generation amazes me with their knowledge of nature and their empathy for the earth.

Throughout history, snakes have been revered by various cultures as supernatural deities and reviled in Christian scripture as the devil incarnate. They were metaphorically banished from the Irish isles by an overzealous saint, and in the modern world, two Aesculapian snakes entwined around a winged staff represent medicine and healing in the symbol of the caduceus, although the rod of Asclepius, with its single snake, is the correct symbol of medical associations in the United States.

Despite being vilified in the Bible, snakes have played significant roles in the social, cultural, and mythological timeline of mankind for thousands of years. More recently, modern medicine has discovered relief from a host of human conditions within the complex makeup of enzymes found in snake venoms, making snakes more valuable to humanity now than at any other time in history.

Whatever you think of them, snakes really are amazing creatures, and they’re far more afraid of us than we are of them. The next time you meet one, wish her well and let her go on her way. If you can’t do that, then give me a call, because catching a snake would make my day!

David E. Jensen is a freelance writer, reptile enthusiast, and licensed rattlesnake removal expert. He has never met a snake he didn’t like.

This article was originally published on May 29, 2013.