Stories of caring for the feral felines among us.

Editor’s note: In cartoons and children’s literature, it’s usually the stray cats and dogs that seem to have the most fun—the charming, freedom-loving, rule-breaking misfits whose lives are one grand adventure.

In real life, however, that is rarely the case. Cats, with their quiet ability to hide and slink away, may turn feral. One pair of unfixed felines can set off a population bomb if left unattended, producing (along with their offspring) as many as 420,000 kittens in just seven years.

We invited Salt Lake City’s feral cat expert Julie Davis (see page 18) to tell us more about these elusive animals and how humans are helping them.

A feral cat is an unsocialized cat. It tends to be fearful of people and keep a distance. Ferals are most often found living outdoors in groups known as colonies. The cats in a colony share a common food source and territory and may include not only ferals, but also strays—former pets who were recently lost or abandoned and are still tame. Most feral colonies originate from unneutered stray cats. Ferals, as well as strays, are increasingly referred to as “community cats” or “free-roaming cats.”

Feral cat colonies, in my experience, are most prevalent in neighborhoods where there are high densities of people who are low-income. Apartment complexes and mobile home parks where residents can’t afford to or don’t prioritize fixing their pets are classic out-of-control areas.

Cat hoarders, people who feed cats inside and/or outside their home, can live anywhere. Once they have 10 or so, the cats may spill into the surrounding areas and form colonies if space allows, such as in rustic areas near creeks, streams and rivers.

You would likely be surprised where there are colonies. At least it still surprises me. But as a general rule, colonies are far less common in neighborhoods where people can afford pet care.

While they live outside human homes and exhibit wild behavior, feral cats are not wildlife. The vast majority rely on some form of human-based food source for their sustenance, whether it’s a caretaker who feeds them daily, a dumpster behind a supermarket or scraps left at a construction site. Very few subsist on hunting alone.

“Feral” is a behavioral characteristic, not a biological one. As a result, the same cat can be feral and not feral at different points in her life.

An outdoor kitten may be born feral, then be taken indoors, socialized and adopted out as a friendly pet. Or an adult cat may be a gregarious pet for years, then become lost and, after a few months of living on his own, start to act unsocialized. Different cats will be feral to different degrees.

However a cat finds itself living outside is mostly irrelevant. What happens to the cat and how it impacts the community around it is the key to its survival.

Two types of community cat colonies are generally found: those that are “contained” and those that are not. A contained colony has only cats that are not reproducing, have been vaccinated and generally share a territory and food source. Most of these cats have the tip of their left ear removed so they can be more easily identified and having been fixed. Colony containment and maintenance (getting any newcomers trapped, neutered and returned) is the end goal. Once a colony is contained, the cats can live out their lives as working cats and will be an asset to the farm, business, neighborhood or industrial area that need vermin control.

On the other hand, an uncontained colony can cause problems. Breeding behaviors are often referred to as nuisance behaviors. Caterwauling, fighting, spraying and having litters of kittens continuously creates stress for both the humans and the cats in the area. Cats’ quality of life and overall community peace are greatly enhanced by spaying or neutering. Vaccinated cats lead healthier lives and share their antibodies with unfixed cats they may encounter, as well.

Community cat heroes are people who are tuned into the cats that live all around us. They take on a wide variety of roles and come from every corner of our diverse communities. Most feed cats as a daily pilgrimage, ensuring that they have food, water and shelter from the weather. But not all caregivers understand that at times their good intentions can cause problems for the cats.

When cats are fed at night and/or in dishes that create trash, the cats get the blame for drawing unintended wildlife into the area and causing a mess. Nocturnal foragers such as skunks and raccoons are hungry, too, and are happy to eat cat food if it’s being provided. There are ways to feed cats and not these unwanted guests. Feeding in the morning so the food is gone by dusk is helpful. The cats need a secluded place to eat during daylight hours and caregivers need to pick up after themselves. 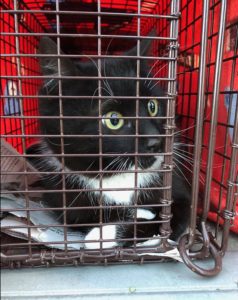 Here’s a story showing that Community Cat advocacy is alive and well in the greater Salt Lake City area:

A skinny black-and-white cat comes bouncing out of the bushes to visit a runner on a Jordan River bike path in early March. This kindhearted runner goes home and posts on the Utah Lost and Found Pets Facebook page about this longhaired stray.

An experienced community cat activist visiting the area discovers a colony of cats that in fact has a dedicated team of daily caregivers that take care of these cats on a daily basis.

As sometimes happens, the colony is fed but hasn’t been actively maintained. So it’s growing, with unfixed cats breeding and producing kittens. The greater Salt Lake area is blessed with skilled trappers of these feral and semi-feral cats. Once trapped, they are loved and handled with the utmost care. So the word went out that trapping help was needed.

Two women sprang into action,  trapping 13 cats in two days. These cats were then brought into the Best Friends clinic in Orem where they were spayed/neutered, vaccinated, ear-tipped and treated for any wounds on them at no charge. Thank you, Best Friends. After a day to recover, the cats were set free in the exact place they were trapped. This process is called trap-Neuter-Return (TNR).

While the cats were away at the vet, other volunteers cleaned up the site, dismantling some of the shelters and replacing the flea-infested bedding. Yes, fleas. Someone, no doubt with good intentions, had provided carpet remnants for bedding, which creates a warm, moist environment for bugs. Straw is the preferred bedding to use as it dries quickly. 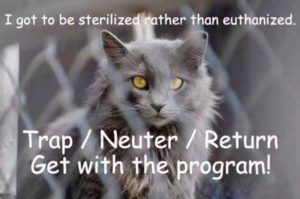 So back to our friendly, skinny,  black and white long-haired cat who alerted us to his colony. He and his best buddy were seniors (10+ years old) with respiratory infections and badly infected mouths. This was the real reason he was thin. Three local organizations conspired to help these handsome old boys. Both  are now up for adoption through yet another organization that specializes in finding compassionate homes for senior cats.

Discovery of this first colony led, as so often happens, to more cats in the general area that needed help. Monica Dixon (see story, page 22) connected with the trapper and jumped at the opportunity to learn to trap the ferals that had been frequenting her neighborhood.

Prior to the Covid-19 outbreak she worked closely with her local West Valley City Animal shelter staff to take the trapped cats into the shelter. They, in turn, got the cats fixed, ear-tipped and vaccinated and then returned them to where they’d been captured, with Monica as their caregiver. It was a wonderful partnership.

This tale is just one example of how individuals advocating for our free-roaming cats can start a chain reaction of care.

There’s a multitude of ways to help, from small acts of kindness like leaving fresh water out in a shady corner to becoming passionate about ensuring that every cat in your path has the support it needs to thrive. Please take a closer look. There is a small army of Community Cat Heroes ready to help you help these cats. 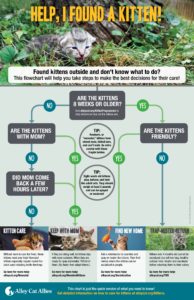 This article was originally published on May 2, 2020.