Guy Wheelwright has been named as manager at downtown restaurant Bambara. Prior coming to Bambara, Guy has provided laudable management and service at several other Salt Lake area restauarants, including Log Haven, the Metropolitan, Wildflower Restaurant and Lounge at Snowbird, and Squatter’s Pub Brewery.

Pet massage practitioner Mary Norton recently introduced her services to pet owners in the Salt Lake Valley. Mary comes to your home to provide massage and therapeutic touch for your pet. She hopes to benefit older, injured, ailing or even just shy and nervous pets. Services run from $20 to $40 depending on pet size and location. Discounts for multiple pets available.

Kingsbury Hall recently announced the appointment of Kristin Liszkowski Dean as development director. Kristin will provide strategic direction and management for all fundraising efforts, overseeing annual giving, corporate sponsorships, major gifts, and foundation and government grants for Kingsbury Hall, including the performance arts center’s presenting series. Originally from Chicago, Kristin studied modern dance at the University of Utah before earning a degree in political science and a certificate in integrated marketing and communications. She lives in Salt Lake City with her husband, son and daughter and in her spare time teaches yoga.

The Utah Arts Festival, in conjunction with the Salt Lake City Mayor’s Office, is accepting nominations for the annual Mayor’s Artists Awards. Four categories—Visual, Performing, Literary and Service to the Arts—will be awarded and recognized by the mayor at the 31st annual Utah Arts Festival, June 21-24. Community arts organizations and Salt Lake City artists who excel in their work and make a contribution to the arts and the community are eligible for the award. Nomination forms are available on the festival’s website. Deadline for submission is February 23.

The Zen Garden has a new location located near Big and Little Cottonwood canyons. While still maintaining her practice downtown, DeAnna Carradine now offers massage and bodywork at her new
studio in Cottonwood Heights. DeAnna specializes in deep tissue and trigger point therapy and understands the need for massage as injury prevention. DeAnna also offers shiatsu, reflexology, and Thai yoga massage as well as a variety of spa treatments. 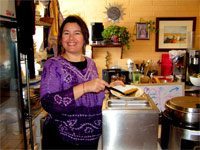 Denise Cerreta’s One World Cafe has recently been designated by the IRS as 501(c)3, tax-exempt non-profit. Denise feels that the non-profit model will better serve her mission with the cafe: “Everbody Eats.” At One World, there is no menu; instead, customers ask for specific amounts of what they want and pay what they feel is right. One World even offers work-for-trade options.

Also, since returning from her trip to India, Denise has set up a complimentary dal and rice station, to “enable people who find themselves low on money and volunteer time a way to eat at our
Community Kitchen.” Or for people who really like rice and dal!

In the December issue of CATALYST we
incorrectly printed Trish Withus’ phone number in the Comings & Goings section (With us Full Time). Her correct phone number is 918-6213.